With the lockdown in full swing, 'Netflix and chill' has become unfortunately literal.

Amid a whirlwind of panic buying, fitness public-service announcements and Netflix bingeing, the world of online dating is surely not at the top of anyone’s priority list as the coronavirus pandemic trudges on.

However, with social media use surging, singletons around the UK have resorted to swiping away the ennui of life in lockdown.

In fact, on the last Sunday in March, there were more swipes on Tinder than any previous day in the history of the platform – more than three billion across the globe.

Of course, online dating is no exception to the wise words of Chris Witty: "Stay home. Protect the NHS. Save lives." Current government guidelines remove the option of direct interaction from potential dates indefinitely.

With this in mind, dating apps have had to think outside the box in an attempt to continue building romantic connections between people from the comfort of their homes.

"Currently, we are experiencing a virtual dating boom, with people looking for ways to maintain the level of connection that they’re used to when dating," Naomi Walkland, associate director for EMEA marketing at Bumble, told Campaign.

"As the landscape continues to change, evolve and adapt, we will be looking to curate content from experts in virtual dating to help educate and entertain our users as they navigate these new ways to connect."

"We are expecting a further increase in messaging and video calling, as more and more people are looking for ways to engage in one-on-one virtual connection during the next couple of months."

In a fortunate turn of events for Bumble, it entered the pandemic as the only dating app with a built-in video call feature (launched last year), allowing users to interact without ever having to meet.

The app saw a 56% increase in video calls in the week ending 27 March (compared with two weeks before), with a global average of 21 minutes per call.

In a further push to console love-seekers, Bumble last week unveiled a bundle of features set to swoon the isolated masses, including a "virtual dating" badge that shows whether people are up for an online date.

The new in-app tools also allow users to expand their 50-mile distance filter, broadening their search for love to include any suitable partners from their country.

Walkland added: "We know that, during uncertain times, people are looking for deeper connections and stability in their lives. Virtual dating means that singles can still build meaningful relationships and get to know each other in a safe space."

A similar initiative has been adopted by Tinder, which has created a "passport" feature allowing members to interact with people from across the globe. 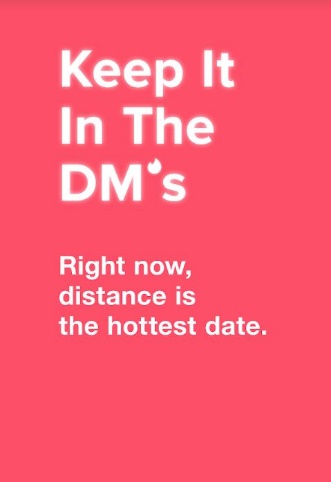 The last week of March saw a 20% increase in users "passporting" to France, while 19% opted to virtually travel to Germany and 25% braved the digital trek to India.

Other dating apps are following suit, with Hinge – which claims to be the UK’s fastest-growing dating app – launching its "Date from home" initiative recently.

The feature hopes to bridge the awkwardness of turning a flirty conversation into decidedly more real face-to-face meetings and follows a survey from Hinge that found 70% of users are open to a virtual date via webcam.

"While we may need to be physically distant right now, we can still be socially connected," Tim MacGougan, chief product officer at Hinge, said.

On the subject on connecting socially, perhaps unsurprisingly Tinder has reported that just about everyone has been chatting about toilet roll.

Who says romance is dead?

Hinge "Designed to be deleted" by Red Antler

Tinder "Invention of together" by Tinder and Buck