The UK ad market is on course to achieve the strongest ad trade recovery of any major global market this year, the latest Advertising Association/Warc Expenditure Report reveals.

It is forecast to fully recover from last year’s media slump with every pound invested in advertising generating £6 in gross domestic product.

"Advertising investment has mirrored the rapid changes seen across the economy over the past year, primarily the acceleration provided by lockdowns towards ecommerce across all sectors able to sell online," Stephen Woodford, CEO of the Advertising Association, said.

“The pandemic accelerated trends that were already changing the market, evident for several years.” 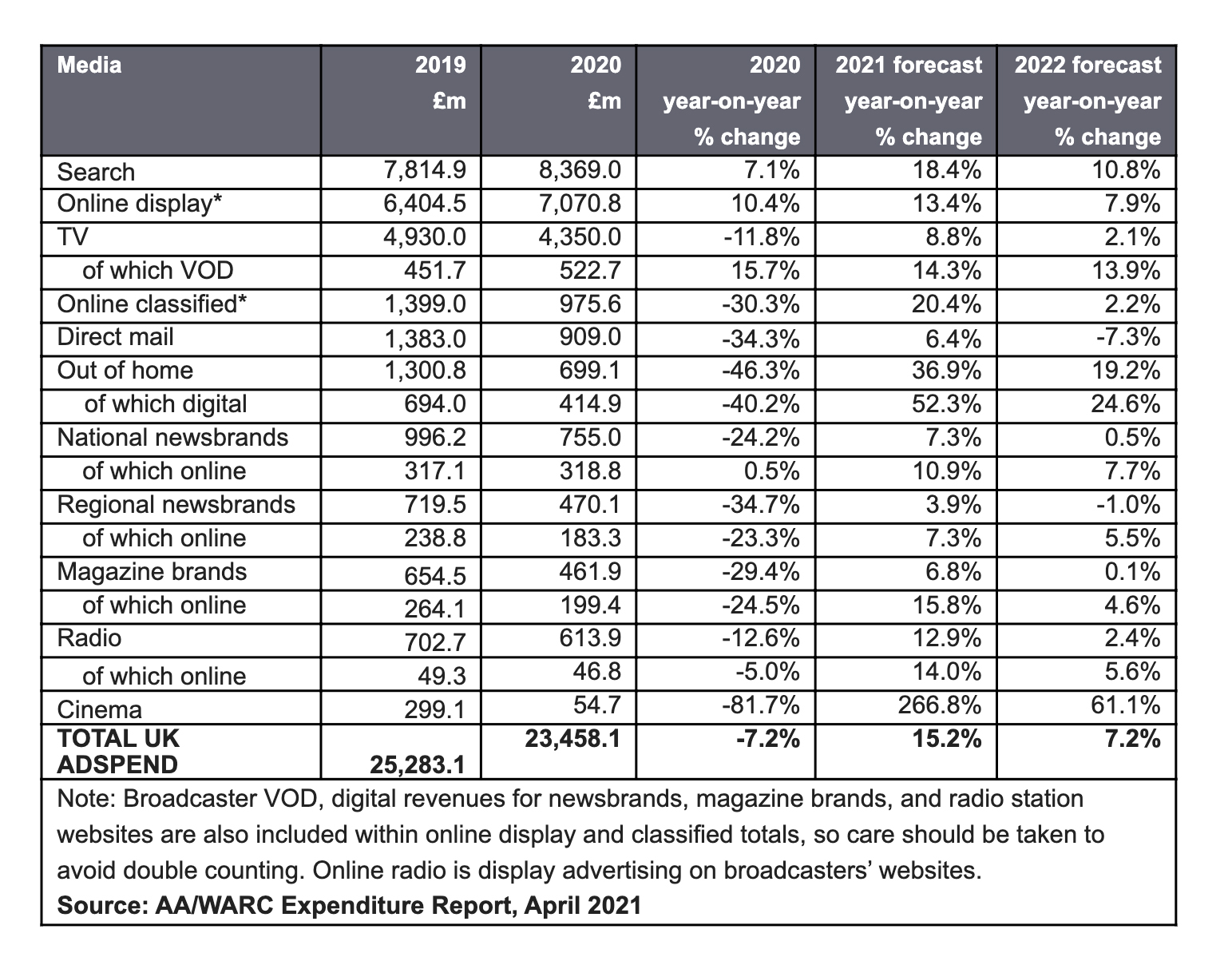 This year's spend is predicted to grow across all media, most significantly in two sectors that were worst affected by the coronavirus pandemic: cinema (266.8%), and out of home (36.9%). But while digital out of home will grow 52.3% to cancel out its decline last year, traditional outdoor media is only set to grow 14.5%, meaning that out of home as a whole will still be smaller this year than in 2019.

Woodford said that the UK’s “sophisticated” online presence “helped to keep the economy moving” and supported businesses during the UK’s lockdowns, at which point high street stores – which remained closed for months on end – were able to serve their customers via online platforms.

He continued: “Across the economy that advertising serves we saw remarkable innovation and agility, which helped to lessen the economic impact as firms adapted to keep serving their customers, despite the disruption."

The 7.2% decline in the market last year was softer than the decline experienced following the Great Recession: AA/Warc said most media owners had still recorded significant reductions in spend.

However, spend picked up by 2.6% in the last quarter of 2020 to reach £7bn, the highest quarterly total on record.

James McDonald, head of data content at Warc, described last year’s data as “unlike any we have seen in our 40 years of market monitoring”, with a majority of media owners surveyed by the company experiencing “their worst trading climate in living memory”.

“This was true at both the financial and the human level – many will not witness a full recovery until 2022 at the earliest,” he continued.

The previous forecast, released in January, significantly upgraded its growth estimates for 2020 with a 6.6 percentage point improvement on its forecast three months prior.

Last year also saw government adspend grow by 37.2% due to an influx of public health messaging during the pandemic, which is expected to fall back in 2021.

Justin Pahl, CEO at VMLY&R London, told Campaign: “The role our industry has to play in accelerating economic health and bouncebackability shouldn’t be underestimated.

“Advertising is a huge driver of GDP, and I’m really proud of the industry’s people – some of the smartest, most creative, innovative and tenacious I’ve known."

Pahl said that the industry must be able to “recognise opportunity when we see it” and “reframe standards and practices when it comes to crucial topics like sustainability and diversity” in a bid to “drive rapid and lasting change for the better”.

“I believe there should also be a renewed focus on creating real customer value – in fact, human value,” Pahl added. “After all, being human is what connects us all. We’ve all read plenty about ‘brand purpose’ – but it is proper ‘purpose’ that is in our grasp now.”

Earlier this week, the NHS launched an ad signalling “hope” as coronavirus vaccinations continue to be rolled out across the UK.

The winning formula for analytics in 2021

Digital now more than half of global adspend