Ad viewability levels in the UK have risen for two consecutive quarters - a first since Meetrics started tracking the data in 2014.

In the third quarter of 2017, the proportion of banner ads served that met minimum viewability guidelines rose from 51% to 52%.

This followed a rise from 47% to 51% in the previous quarter.

Ads are deemed viewable if the meet the IAB and Media Ratings Council’s recommendation that 50% of the ad is in view for at least one second.

While not quite the heights of the first quarter of 2016, when ad viewability hit 54%, the consecutive rise is significant, Anant Joshi, Meetrics’ country manager for UK & Ireland said.

"For the first time, there’s a consistent positive trend which is a sign that efforts to increase viewability are bearing fruit," Joshi added.

Agency groups are finally starting to demand a higher percentage of an ad’s surface area to be in view, he continued, which is a key factor in driving this change.

Despite the continued improvement, the UK still lags far behind the other six European countries in which Meetrics measures viewability. 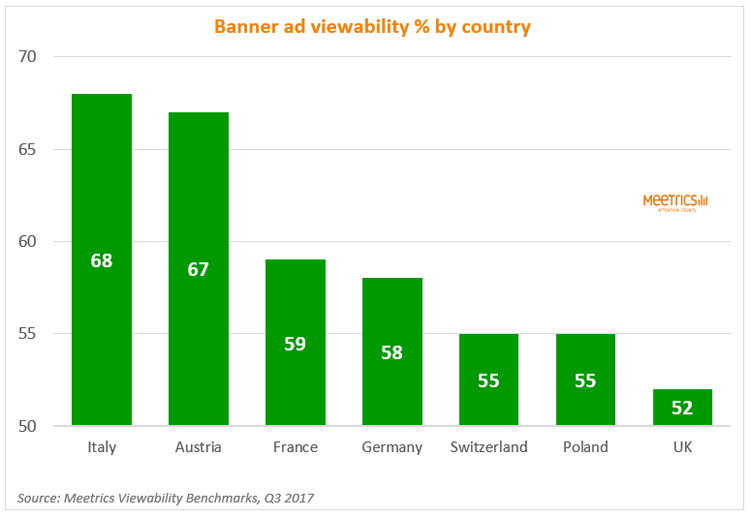 Italy leads with 68% viewability followed closely with Austria at 67%.

On the other end, Switzerland and Poland (both 55%) are the closest to UK levels.

"Despite the UK heading in the right direction, the latest IAB/PwC digital adspend figures suggest around £165m in the UK is being wasted per quarter on ads not meeting minimum viewability guidelines," Joshi said.

The trouble with digital media: why the transparency debate is still murky

Effectiveness: why the pendulum is swinging back to TV

The five golden rules of programmatic for brands

Learning to love the machines: What I've learned about AI, VR and the future of the ad industry

Government to launch £140m media-buying review 'with transparency at heart'

Building a media partnership for the future