Immediate outlook is gloomy, but clouds should clear once Brexit is done and/or dusted.

UK marketers have recorded a slight reduction to marketing budgets for the third quarter of 2019 as economic and political uncertainty around Brexit drains confidence, according to the latest IPA Bellwether Report.

A net balance of 0.5% of advertisers reported downward adjustments to their marketing budgets for the third quarter (July-September). While this marked the first time in seven years that marketers have experienced cuts to their allocated spending, the IPA stressed that the net balance was only marginally lower than the previous quarter's 0.0% balance and was a sign of hesitancy at UK businesses.

Aside from net changes, the IPA reported that 64.1% of its Bellwether panellists reported no change to marketing budgets – an indication perhaps that they are waiting to see what transpires with Brexit and its impact.

Around a fifth (18.2%) of companies reported cuts to total ad expenditure and a similar proportion (17.7%) reported increases.

Clearly, marketers have noted diminishing consumer confidence around leaving the European Union and that in turn has dissuaded brands from launching big-ticket marketing drives. Consequently, a net balance of 0.0% said that main media budgets were in stasis in the quarter, compared with the previous two quarters' upward revisions of 5.2% and 5.6% respectively.

Paul Hutchison, chief executive of Wavemaker, expressed his disappointment at advertiser reticence, but said it was an "expected, and totally understandable, by-product of an unformed post-Brexit future".

He continued: "Advertisers are living in a challenging environment of ‘now and not yet’ – toughing out the existing and continuously changing political and economic uncertainties."

Paul Bainsfair, the IPA's director-general, described the notion of cutting budgets in the midst of uncertainty as a "false economy".

"The evidence shows that, far from being prudent, it can have a negative long-term effect on growth," he said. "Companies that hold their nerve consistently, and that invest in the 60/40 ratio of longer-term brand-building to shorter-term sales activation, outperform the market."

Cuts to budget have led some marketers to place greater emphasis on cost-efficiency, resulting in budget being reallocated to online and social campaigns.

This saw internet advertising remain the top performer in the quarter. A net balance of 11.1% of companies reported budget growth, a tiny dip on the previous quarter's 11.5%. However, search and SEO experienced a fall from a net balance of 9.9% in the second quarter to 6.1% in the third quarter, while mobile advertising fell into negative balance (-0.6%) after stagnating in the second quarter.

The worst affected discipline was market research, which fell from -2.9% to -16.9% – the deepest cut to budgets in the report's seven-year history.

Direct marketing also continues to suffer spend-wise, with a net balance of -7.0% in the third quarter, but it was a slight improvement on the previous quarter's -9.0%. Sales promotion budgets slightly improved (to -2.3% from -7.1%), while events spending was downwardly revised for the first time since the third quarter in 2018 (to -5.9% from 4.8%). 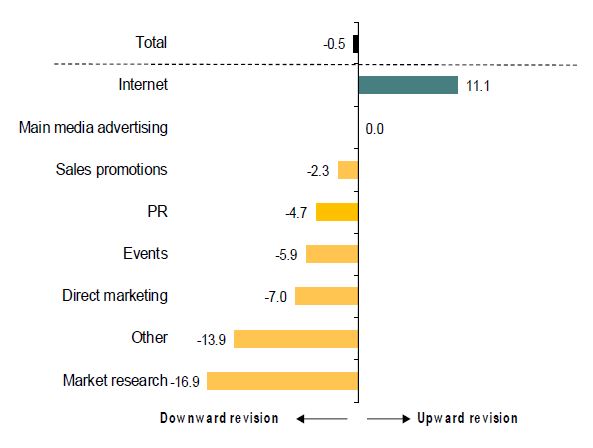 Looking ahead, matters are far from rosy – marketers view prospects for their own company and the broader industry with pessimism.

However, advertisers have readjusted their budgets to allow for sustained growth in digital marketing, and while adspend in 2019 will grow marginally there are improvements predicted for 2020 and beyond.

Industry-wide expectations were downbeat, with a net balance of -25%, a minuscule improvement on the second quarter's -25.6%, and still among the most negative balances since the fourth quarter of 2011.

There was also a marginal improvement in the balance of businesses expecting worsening financial prospects for their own businesses – to -9.4% in the third quarter from -9.8% in the previous quarter.

Given how little has progressed around economic uncertainty, the IPA decided to leave its forecasts for 2019 unchanged, anticipating 1.1% annual growth in adspend.

Jem Lloyd-Williams, Mindshare UK's chief executive, said that the agency's own research showed that most people feel "powerless about what might happen" over Brexit, but added that they are "switching their focus to the climate change crisis – giving them something they feel they can positively influence".

Agencies and clients that are able to tap into consumers' psyches will benefit. "Whatever the immediate effects of Brexit, understanding people’s motivations and emotions better than anyone else during next year provides a competitive advantage," Lloyd-Williams said. "And it helps resist the temptation of looking only in the short term for returns on media investment."

Meanwhile, Rich Kirk, Zenith UK's managing partner, said that he understood why brands were "holding back given reduced consumer and business confdience", but echoed Bainfair's comments.

He continued: "However, this data reminds us of the importance of our core mission; as the ROI agency, we aim to be the agency partner that helps our marketing clients deliver a credible narrative on how marketing investment pays back to business success.

"When we are at our best, we help CMOs and marketing directors to protect their budget as the CFO and other board members see this outlay a key strategic investment for the business."