Adland's newest start-up is in the business of making a difference.

First I’m going to lift up my editorial skirts and give you a flash of the frilly underside of this article.

We fixed up a photoshoot of Nils Leonard, Lucy Jameson and Natalie Graeme. Until last summer they used to work together at Grey London, as the agency’s chairman, chief executive and managing director respectively. Now they are Uncommon, adland’s newest start-up and potentially the most exciting in a decade. So we took plenty of pics, different poses, backdrops, smiles, serious, together, separate.

Then Leonard asked to see the pictures. Damn it, I showed him. Apparently our photographs made the trio look too hard, too unfriendly, mean. So we agreed to take them again, to make Nils happy.

From here on, Leonard took charge: found a new location for the second shoot, wrote a new brief for the photographer. The priorities, he said, were to make sure he and his partners didn’t look like media dickheads, that they looked like a tech start-up or a design agency, "not just another ad agency". So the pictures here are absolutely how Nils Leonard wants you to see his new company.

"We believe that some brands can make a difference like never before, far faster than politics, more impactful."

All this tells you – though surely you knew already – that Nils Leonard is super conscious of his image. And now that of his new agency. Uncommon: a preposterous name but if they’re successful we’ll forgive them, just like we did Adam & Eve. Hands up, before we go any further: I hope it’s a name the industry will become proud to own. We desperately need more of those.

Leonard puts it like this: "We believe that some brands can make a difference like never before, far faster than politics, more impactful. These are brands that matter, brands that people in the real world are actually glad exist. We’re going to work with the world’s most ambitious people to build these brands. Or we’ll create them ourselves." Don’t forget that last sentence, I’ll come back to it later.

It’s interesting that this new "un" agency is defining itself as much by all the things it isn’t as by the things it is: "un" the holding company model and "un" working with many of the marketers and brands that power it. "This is about being independent in the truest sense of the word," Leonard explains. "It’s about trying to remove the dependency crippling the ad industry to create a larger and more ambitious creative canvas. By being less dependent on clients, on briefs and on the models of the past, we can be more ferocious about the brands we wish existed and the creative ways in which these brands behave in the world."

"I know he’s a professional schmoozer but he can schmooze me any time. I adore Nils"

Let’s unpack uncommon brands a bit more. Leonard reckons we have reached "peak stuff". "The idea that we don’t need more things in the world now, we need less, is very powerful. We need the right things. It’s not just on our client partners to interrogate the products they put into the world but it’s on us as creative companies to ask ourselves if we’re adding something of value. So many brands are finding sticking plasters in the form of ads and logo redesigns when what they should be doing is examining their place in the world and the relationship they have with people."

Jameson says they’ve sat down and tried to codify what actually makes an uncommon brand: what these brands need to do, what they can’t do, what cultural accompaniments are important. But if yours isn’t already an uncommon brand, then the agency has a fast "sprint" that it will put brands through to help them transform into a brand that matters and cares. 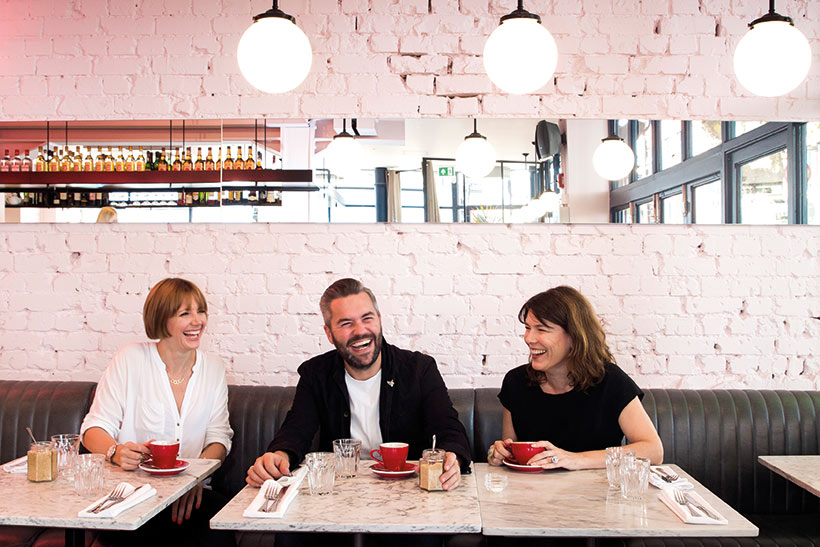 Then comes creativity, the work. Uncommon is clear that the best advertising doesn’t look like advertising any more. From apps to new utilites, great pieces of entertainment, they will do it all.

Now you could hear all this – and I have heard all this, or variations on it – from other teams and it might sound naive, or unworkably idealistic, or painfully artificed. But I’ve pinned Nils Leonard for such weaknesses before and I’ve ended up reconsidering almost every time. Together, Leonard, Jameson and Graeme make Uncommon’s ambition sound thoroughly plausible – necessary, even.

Fact: Leonard is the magic here. Yes, he’s full of ridiculously romantic hyperbole. But he has something infectious and angrily passionate that can suspend your cynicism even as you recognise how calculated he can be. He’s smarter than you might imagine and he knows his craft. And he’s a little bit wicked, in a good way. Plenty of people find Nils Leonard too slick, too pleased with himself. I know some marketers don’t like it, he is everything they hate about adland and the cocksure cult of the creative. And he can be gauche. For all his manicured image, he can be sloppy on some of the small things that define real professional class.

"Natalie might not be the best suit in the business, but she’d crawl over hot coals for Nils. She’ll get him what he needs."

But, seriously, who the hell else in our business provokes any real reaction at all? How many people could we be bothered to analyse, to discuss. And you can’t moan endlessly about how bland our industry’s become and then not take pleasure in Nils Leonard and his shameless chutzpah. He’s the closest the new generation has come to an industry celebrity. I wish there were more.

A very senior and influential (female) executive said to me recently: "I know he’s a professional schmoozer but he can schmooze me any time. I adore Nils." Believe me, she’s not a gusher. His partners reckon he’s the tethered goat, the pungent promise of meat that lures the big beast. Though if your meat of choice is rich, nourishing brains then there’s Lucy Jameson for that: super smart, a child of the BMP class of strategic intelligence. As for Natalie Graeme, she’s not a proven star like the other two, she’s not a "name", but she’s got a raw, hungry ambition that Jameson lacks. And, as a colleague once said: "Natalie might not be the best suit in the business, but she’d crawl over hot coals for Nils. She’ll get him what he needs."

It’s not hard to see how this combination of talent should believe it can make its own uncommon brands as well as help existing ones. And there’s a keen edge of frustration sharpening this ambition. It’s a frustration born out of years working for clients where the agency team often has more passion and commitment than the chief marketing officers and even the chief executives that run the brands themselves.

Here’s Leonard’s take on it: "When you pitch for a piece of business at an agency, you have a fantasy for their brand and then you try to drag their brand towards this fantasy. And you do that day-in, day-out. That’s all you fucking do, to the point where you ask ‘why are we fucking striving like this? Why are we dragging these lazy, really frankly sarcastic brands to this brilliant place when we should be making that fantasy brand ourselves?’"

So that’s part of the plan. They’ve already helped launch a new eco coffee brand, Halo, and have a 19% stake in the business. Then there’s 3% equity in a new recruitment company backed by US accelerator Y Combinator and already valued at £22m. Headstart profiles young job seekers by their passions and their beliefs, rather than their grades, and then matches them with companies based on their culture and ethos.

"Fridays are for us," Graeme says. "It’s one day a week when we will work on our brands, our ventures." "This is about putting our diary where our mouth is," Leonard adds.

"Every now and then there’d be horrific reminders slapping me in the face that we worked for a holding company."

To create these uncommon brands and help others build theirs, Uncommon intends to ape the Hollywood studio model, building bespoke teams of strategists and makers for each project.

Jameson explains: "Today there’s a bunch of brilliant people who love advertising but they’ve got a side hustle too and they want a lifestyle that allows them to accommodate both." From proven strategic thinkers that have bailed out of full-time adland to 3D model makers, animators, musicians, script writers. Leonard reckons the philosophy of Uncommon "really appeals to talent". "They want to make the sort of stuff we’re talking about. They don’t want to make ads for shitty brands they hate," he says.

And they don’t want to be tied into shitty contracts that lock them into crippling non-compete clauses and restrictive covenants. So Uncommon has written an uncontract, a promise among its collaborators to treat each other with decency – no lawyers necessary.

Uncontracts, relationships: there’s a motif that threads through Uncommon’s philosophy. It’s about mutual respect among like-minded talent. It’s about recognising that people have families and commitments, that work has its place in a bigger matrix of life. It’s about trust, relying on the handshake of a decent person rather than convoluted, opaque legal documents.

It’s also about Sir Martin Sorrell. Leonard, Jameson and Graeme had all signed up to onerous WPP contracts at Grey, contracts – let’s be clear – that rewarded them extremely well. For Jameson and Graeme, the contracts meant six months’ gardening leave and then six months’ non-compete, which they both spent on placements working for media agencies, tech companies, start-ups, hoovering up invaluable new insights and experiences each time. So they are smarter now than they were when they resigned a year ago. Cheers Martin. "I wanna give him a big kiss," Graeme laughs.

Meanwhile, Leonard went into 2017 tied into a 12-month non-compete clause. He spent the first half of this year helping to launch Halo, saying yes to every invitation that polished his industry profile and fighting to unshackle himself early from WPP’s contractual chains. By 1 August, Leonard was free.

So let’s be clear. They had all been earning a crap load of cash. They had turned around a hopeless case to make Grey one of the hottest agencies in London. Why exactly did they want to leave their old jobs?

Leonard says that in order to effect a turnaround at Grey, he’d convinced himself that the agency actually was a start-up, his start-up. "But every now and then there’d be horrific reminders slapping me in the face that we worked for a holding company."

No more face slapping for Leonard, Jameson and Graeme. No more big pay cheques for a while. No more crappy clients. How brave. How exciting. How uncommon.

Peak transformation: how to tackle the risky business of driving change

Why the best things in life make you sweaty

Don't give marketers all your ideas, Leonard says

What a time for Grexit