In the run-up to the New Thinking Awards, in partnership with Sky Media, Campaign will be publishing case studies from a selection of the categories. First up is the Big Idea, over the coming weeks we will publish all the shortlisted entries in this category.

"You can make it" – and the integrated campaign it spawned – completely changed perceptions of Pot Noodle.

The YouCanMakeIt hashtag generated 29 million impressions, 92% of which were among 16- to 24-year-olds. And Pot Noodle trended on Twitter as major youth influencers like Perez Hilton threw their weight behind the brand’s inspiring message (Source: Unilever People Data Centre).

Brand-tracking measures all jumped and consideration shifted by double digits (Millward Brown). This created a surge in sales as new people flocked to the brand. In total, 364,000 extra homes bought Pot Noodle versus the year before, and yearly sales exceeded £100 million for the first time (Neilsen).

Pot Noodle’s association with 1990s ‘slacker’ culture had always made it the choice of the lazy and the indolent, but today’s 16- to 24-year-olds no longer identified with that lifestyle.

They were driven, ambitious and determined to succeed.

Our idea was: "Pot Noodle, you can make it." And we used it to create not only TV and digital advertising, live stunts, sampling and sales promotions, but to literally help a host of young people make it. We funded entrepreneurs, fulfilled dreams and even helped get a music career off the ground.

The word "integration" is often used to mean "matching luggage", but this was an example of an idea that led to integration through action, not just art direction. A huge team of agencies and clients worked collaboratively together to really land "You can make it" in youth culture and live the idea in action.

As a result, young people completely embraced the "You can make it" idea. The hashtag generated 29 million impressions and Pot Noodle became a trending topic as our inspirational message was retweeted and reposted by media brands and youth influencers.

Views of Pot Noodle changed overnight, with young people citing it as a positive, motivating and even aspirational brand.

Tracking data shows that perceptions of Pot Noodle changed dramatically and this translated into business results. Attributes such as "is for go-getters" and "is a brand for people like me" showed significant increases, and consideration went through the roof.

Pot Noodle’s 'slacker' image was no longer aspirational. Pot Noodle became a cultural icon in the 1990s when it was embraced by the PlayStation-loving, Men Behaving Badly-watching ‘slacker’ generation.

The ease and convenience of Pot Noodle made it the perfect food for this infamous lifestyle, and the brand became emblematic of it. So that was the positioning the brand had occupied ever since.

But while Pot Noodle had stood for the same thing since the 90s, young people had changed. There was now a new generation of 16- to 24-year-olds buying pot snacks, and their values were completely different.

These kids had grown up watching their peers become tech billionaires (Mark Zuckerberg), self-made media moguls (Zoella) and global peace envoys (Emma Watson). And they were determined to achieve success of their own. 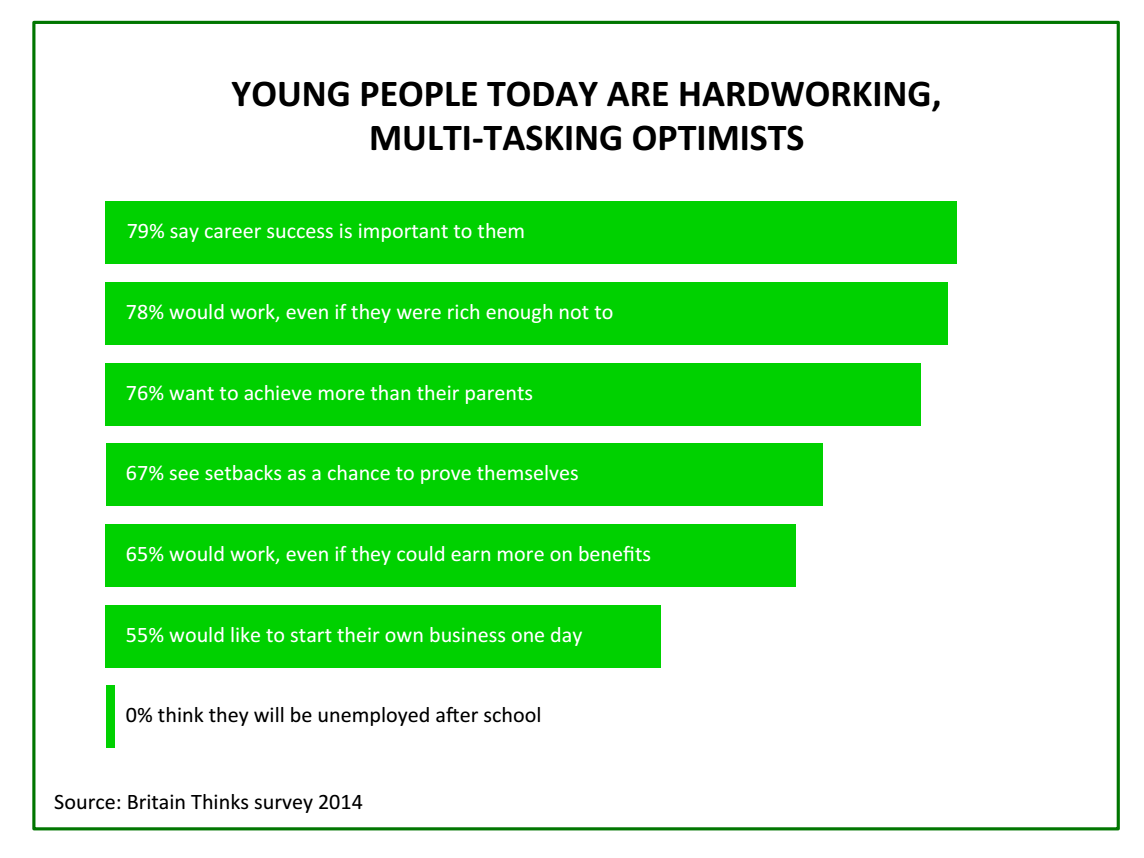 This was the most ambitious generation of young people ever, and Pot Noodle’s 'slacker' image was badly out of step with their values.

Less time cooking means more time winning. We spent time with the new generation of ambitious, motivated young people, and they told us something really interesting.

They valued Pot Noodle for the same reason the slackers had: because it was quick and easy. 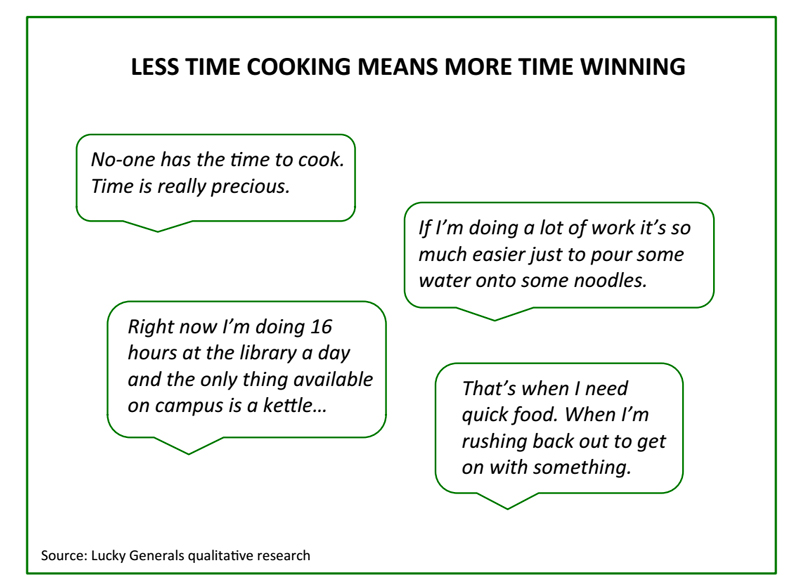 The idea: "You can make it"

Now we understood why this new generation of go-getters used our product we could make the brand relevant to them again.

We would ‘flip’ Pot Noodle’s convenience benefit, positioning it as perfect for the busiest and most ambitious people on the planet.

(After all, if you can make a delicious hot snack in four minutes flat, then imagine what you can do in four years.)

We set out to deliver this new positioning with the brand’s trademark humour and an irreverent, unexpected twist. 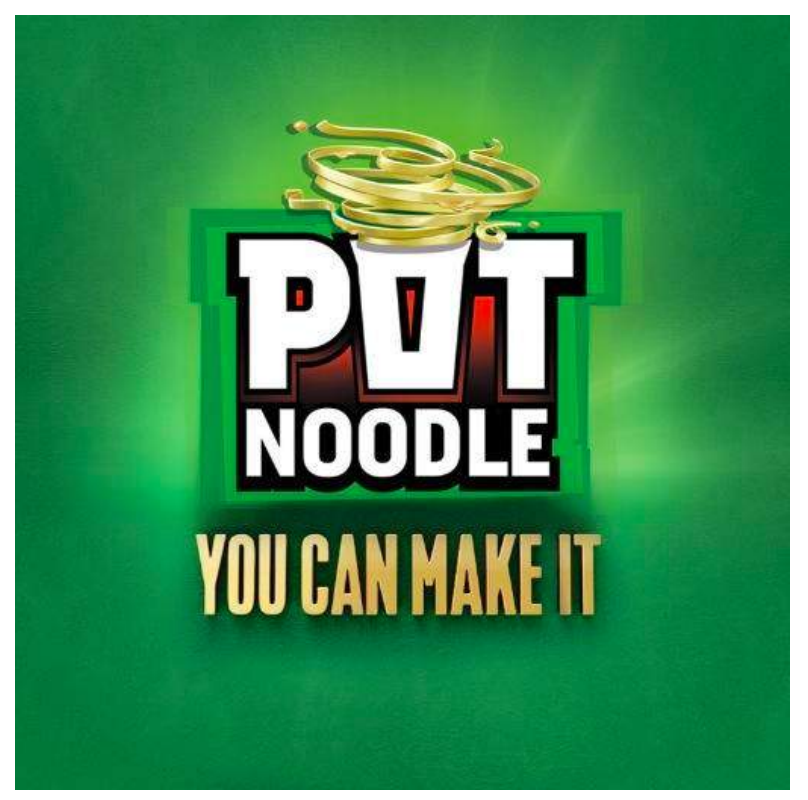 This simple line was literally true of the product (anyone can make it) but had a deeper meaning that was completely in tune with the zeitgeist.

The campaign: Helping a generation make it in 2015

The crack team that was assembled to launch "You can make it" included Lucky Generals (Lead creative), Mischief (PR), Mindshare (media), Hey Human (Sales promo and activation) and of course Unilever – our client.

We kicked off with the story of a young man who dreams of success in the boxing ring – but not as a boxer. The 60-second version of this film broke during The X Factor on 11 September 2015 and we tied in paid support on Twitter to further amplify the story. 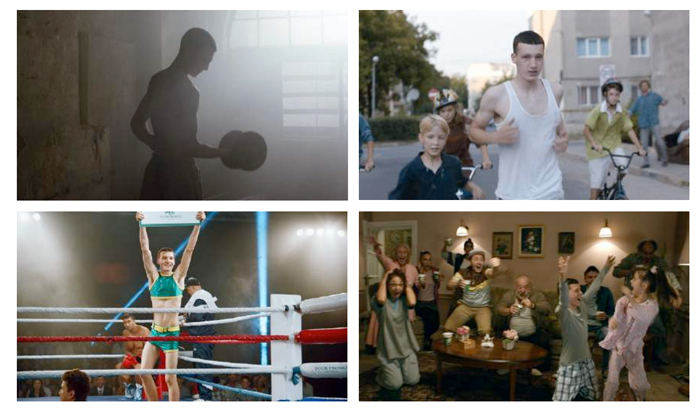 Twenty-four hours after "Boxer" broke we realised that a big boxing match was planned at the O2 arena the very next week. So we started making calls…

…and the following Saturday, a week after the TV spot broke, we sent our young star Michael Moran to Greenwich, to reprise his role as the "ring boy" at the Joshua vs Cornish Commonwealth bout in front of 20,000 fans and the assembled press. 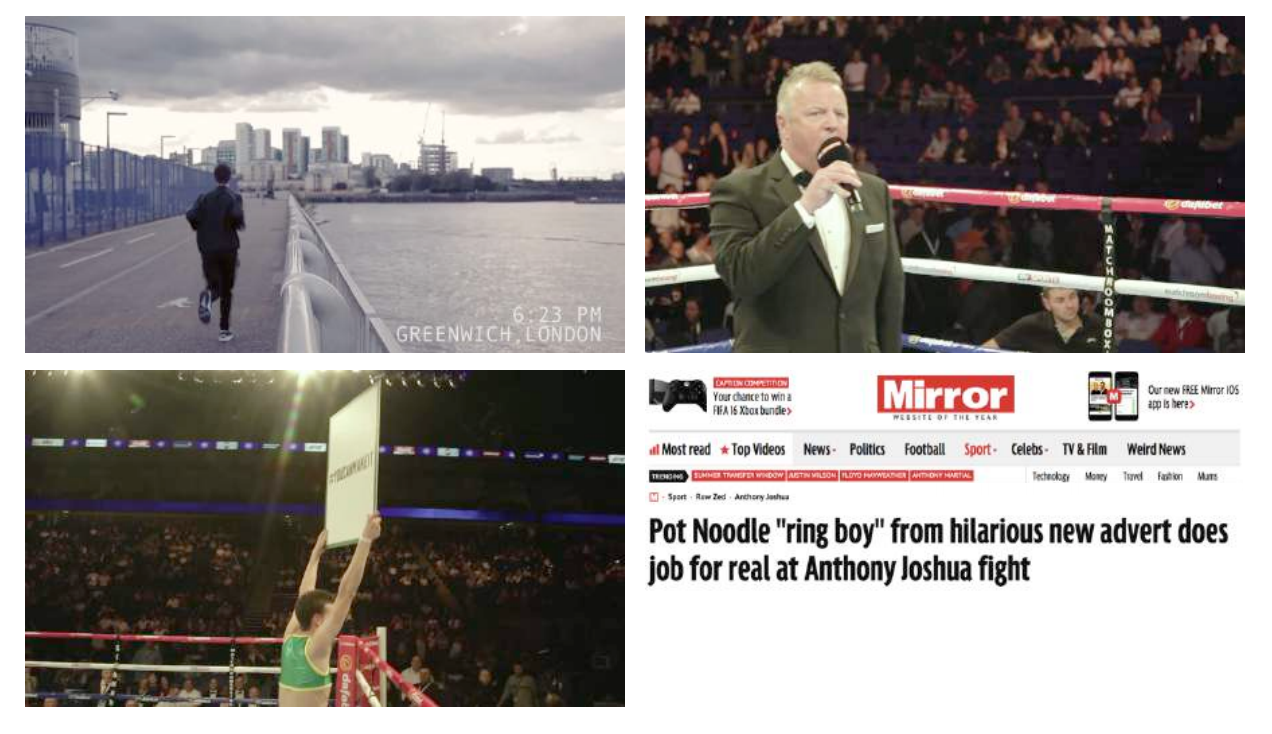 At the same time we were running mobile and online ads encouraging our young audience to keep smashing it. 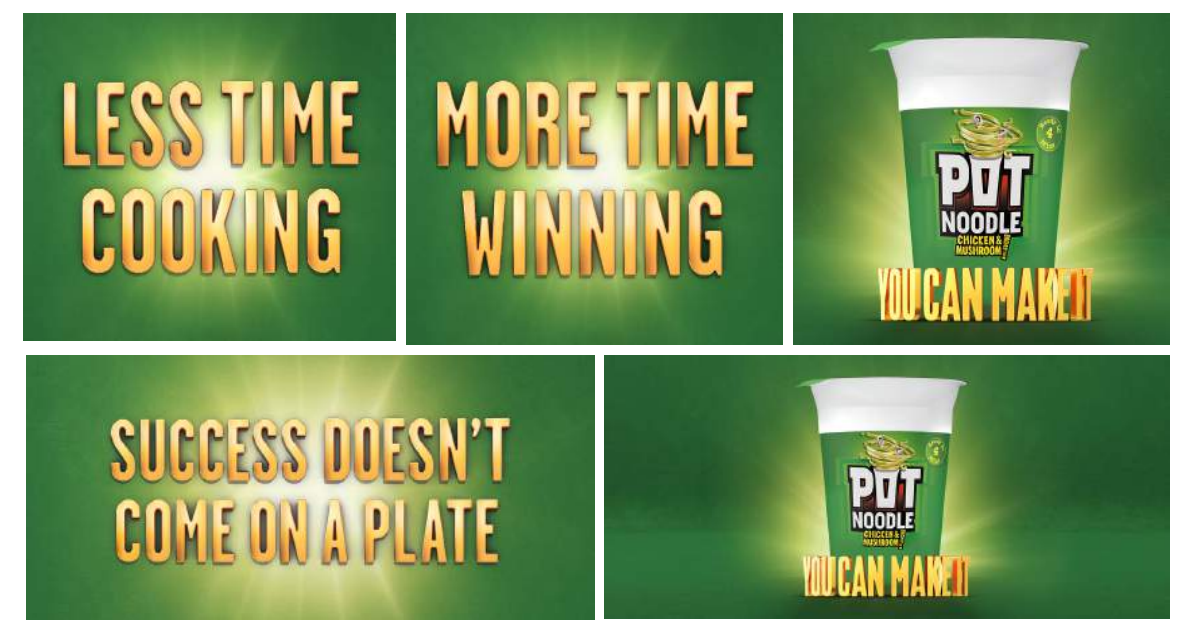 Next we turned to the world of Kickstarter, where we found an engineer who had invented a timesaving noodle spoon. We funded his invention and brokered an exclusive deal with youth websites The Poke and The Tab to report on it and invite people to tweet us with more ideas.

We eventually selected Bianca Politzzi’s "Kettle Cup" as the winner from a longlist of 80 submissions and sent her to show off her prototype at CES, the technology trade show in Las Vegas.

We helped students "Make it" in their exams, visiting 20 universities and handing out 100,000 samples of Pot Noodle to in return for endorsement on social media platforms.

We also created an on-pack promotion that gave people the chance to win Pot Noodle-shaped phone chargers that would help them "Stay 100% all day". The promotion was supported with dedicated out-of-home and highly impactful in-store displays.

But perhaps the biggest thing we did was launch a music career. We had commissioned the music for our "Boxer" ad from an amateur rapper called Reece Whyte. On the strength of that initial sample he began to get noticed, so we teamed up with the Unilever Foundry and music specialists Big Sync to fund the full version of the track, which was fittingly entitled Winner. This song helped Reece and his band Raylo sign a record deal with Ultra Music in the US.

For the release of Winner we made Reece and Raylo a full-length music promo. And when the track and promo dropped we started rerunning the "Boxer" ad to help people join the dots and ensure they took out the "You can make it" message. 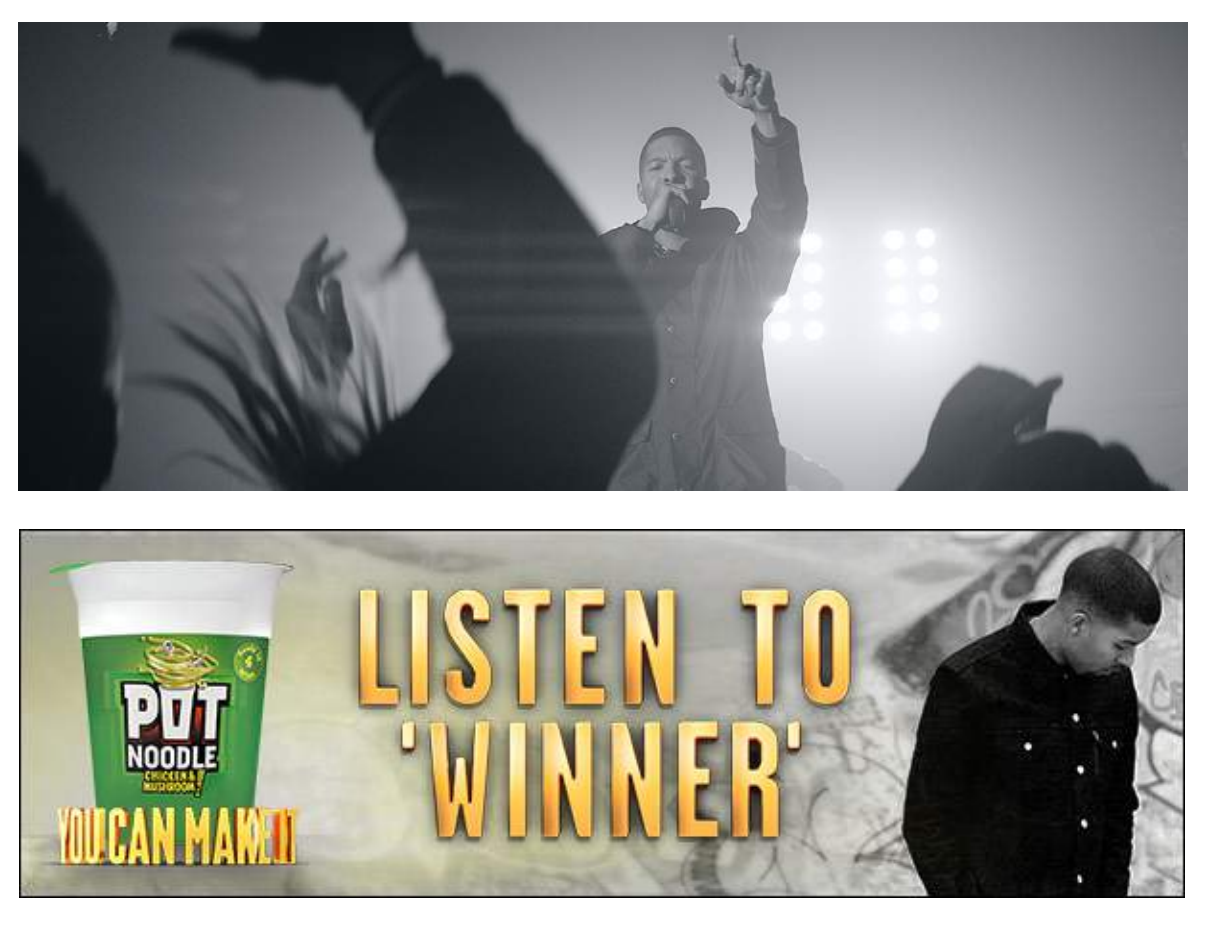 Last but not least, we even used the launch of our new Mac & Cheese flavour as an opportunity to hammer home our big idea. 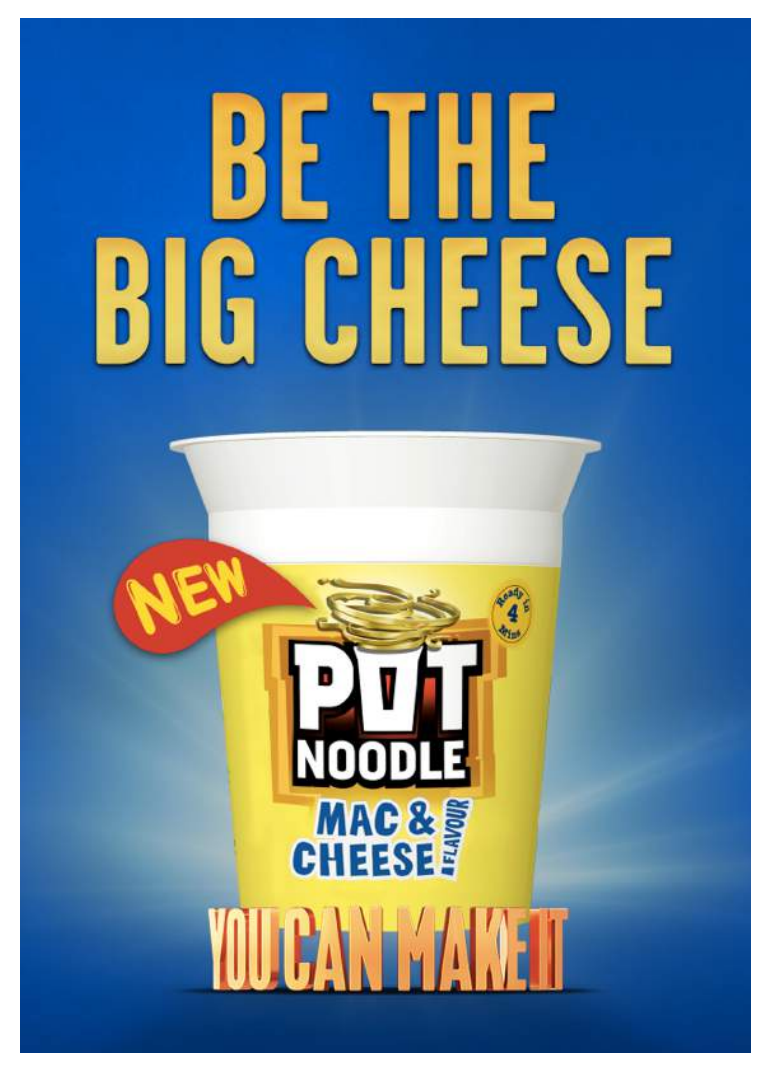 The launch of the "You can make it" idea was truly integrated and spanned every channel, from advertising to content and social media to music-streaming services.

How Tesco vs Unilever became a Brexit proxy war on Twitter

In pictures: Celebration time at the New Thinking Awards 2016

How Domino's and Iris created a new way of advertising taste

Pot Noodle says 'you can make it' in new TV campaign