The FMCG company's vice-president for brand-building, food and ice cream has a broad remit, but a focus on innovation and sustainability.

Jon Goldstone has been at Unilever only for four months, so it is understandable that he is not word-perfect when it comes to some of the facts and figures he conjures up regarding his new employer. However, the enthusiasm of the vice-president for brand-building, food and ice cream is anything but shaky – his delight at joining Unilever is palpable.

He now has his hands on some of the UK's bestselling brands – Flora, PG Tips, Knorr and Magnum – as part of a global business that has placed creativity and sustainability at the centre of its operations, as well as providing the budgets to support this.

Goldstone, who enjoyed one of his finest moments in 2008 when he oversaw the epic 'Go on lad' campaign for Hovis, while at Premier Foods, clearly cherishes the change in culture. He is particularly taken by Unilever's 'Crafting brands for life' initiative, which is intended to bring more creativity to Unilever's marketing output.

'Marc Mathieu (senior vice-president, marketing) talks about "less logic, more magic",' says Goldstone. 'As I've got a feel for the organisation I really understand that now.'

Nonetheless, the current economic climate, with squeezed household budgets, means the work is not without its challenges.

Reflecting on the 'new normal', Goldstone says: 'I don't think we're seeing anyone changing their shopping habits radically, because most changes have already been made. But changes people made that perhaps they initially thought were short-term have become part of their routine.'

For Unilever, this has manifested itself in a few ways: a greater proportion of sales through discounters; the rise of convenience shopping in smaller stores as people avoid the temptation of big supermarkets; and the growth of ecommerce sales.

Goldstone argues that Unilever is helped because 'most of our brands are those where people just don't want to compromise'.

Despite the poor weather of 2012, it was a good year for Unilever's ice-cream business, helped by the success of Magnum Infinity and Ben & Jerry's Core; as a result, this year is about maintaining that performance. It is a similar story for the savoury category (in which Knorr and Hellmann's are its leading brands) and for PG Tips, although the challenge there is to fix its strategy in the expanding fruit and herbal tea sub-category.

The sector in most need of attention is spreads. Flora remains Unilever's third-biggest brand, worth £217m, but sales fell last year. Goldstone's goal is to return to growth at a time when butter sales are rising.

'(In the early days of Flora) we talked about taking out saturated fats from the diet and we need to regain that in terms of margarine versus butter. There is a brand job in that for Flora. It's not doing dreadfully, but it needs dialling up a bit,' he explains. 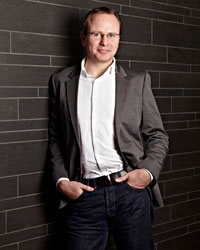 Just over a decade ago, Unilever instigated a brand cull to get the business into better shape by reducing its global portfolio from 1600 properties to 400 power brands and local jewels (such as Marmite and Pot Noodle) under its 'Path to growth' plan.

Even with leaner portfolios, the competition between food companies is fierce as they manage the balance between brand value, sales and retailer relations. While no marketer wants to ruffle the supermarkets' feathers, price promotions are a bugbear. Goldstone is characteristically diplomatic on the subject.

'Promotions aren't a bad thing, they offer consumers value and that has to be good. Having said that, there are a number of brands where the funding of those promotions has come at the expense of product quality and communications,' he says.

'I saw it in my PepsiCo days, on Walkers. As we increased promotional investment, we had to offset that with a decrease in marketing investment. A great brand can't stand for "cheap" - that's the road to oblivion.'

He adds: 'Unilever really understands that; you have to offer value, but you (also) have to stand for something higher or you won't survive long-term, it's not sustainable.'

One of its stand-out strategies has been the Unilever Sustainable Living Plan, the aim of which is to double the size of the business while halving its environmental impact. Goldstone goes as far to describe it as a 'motivator to join the company'.

'Paul Polman (CEO) believes in it so convincingly and that breeds a culture in the organisation,' he says. 'It has a massive effect on the whole organisation and instils innovation and employee engagement.'

The latest activity under the drive is the Sustain Ability Challenge, an insight project intended to show that sustainable living can help families save money. It is being implemented across 12 types of household to test practical ways to adapt their routines. In April, it will report back; the plan is to use its findings to inform consumer-facing work.

While the sustainability strategy is central to the organisation, so is brand development and growth. Will Unilever maintain its marketing budgets in the coming year?

According to Ebiquity, Unilever's above-the-line adspend and direct marketing investment for its food brands fell from £48.5m in the year to November 2011 to £40.5m the following year - a change caused by a shift of investment to boost its focus on digital, according to Unilever.

'Unilever invests in its brands and, if anything, there will be increasing investment,' claims Goldstone. '(Unilever believes) that in times of recession it's more important than ever to invest in your brands.'

Goldstone is certainly qualified to comment. He has marketed his way through various economic climates and corporate cultures during his career.

'The similarities between PepsiCo and Unilever are that they both have high-quality, ambitious people with the desire to grow and develop products. Premier (his last employer) was so debt-laden (£1bn debt on £300m earnings) - so much of the energy of the business goes into paying down that debt. I learned a huge amount, but it gets to the point where you don't have the tools available to do great marketing,' he says.

Communication at the core

Goldstone falls squarely into the camp of marketers who believe that it is important not to get too obsessed with the medium and instead place the focus on the message.

'Social media is interesting, as it falls between several different stools; so you have PR agencies, media agencies and advertising agencies all with their ideas and, more often than not, a lot of those ideas are about ways of communicating, rather than having what you want to communicate at the core,' he says. 'That's where, in my experience, it gets complicated and sometimes wasteful.'

According to Goldstone, the biggest change of the past 20 years has been in marketers' relationship with data. 'When I joined Kraft, we were encouraged and trained to drill down into data in a very disciplined way. To have that left-brain ability to be highly analytical and then the right-brain creativity was vital. There was a period when marketers got pretty lazy about data and almost outsourced analysis to agencies.'

He adds: 'Future marketers will have to be super-smart when it comes to analytics.'

Goldstone's own future has yet to be resolved. He is presently covering Hazel Detsiny's maternity leave and has been promised a permanent role at Unilever, although it is not yet clear what this will be.

However, as someone who describes marketing as 'the best job in the world', Goldstone is likely to remain in the discipline – and it's a fair bet that he will push for a role where he can continue to flex his creative muscles and innovate.

THE CAMPAIGN: Flora pro.activ and the BHF 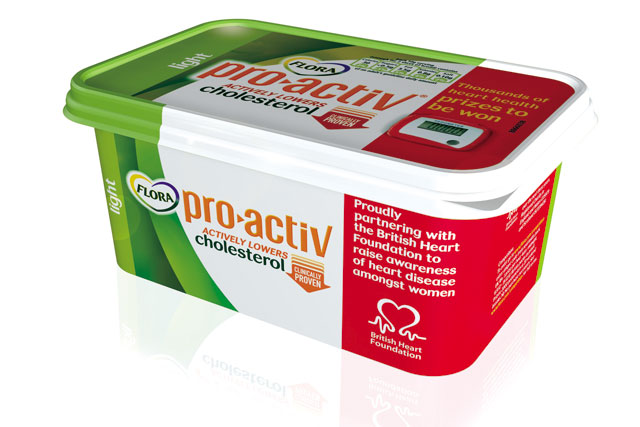 The £3m drive, using the strapline 'Love your heart', was designed to raise awareness of heart disease in women and address the preconception that it is a problem that only men need to worry about.

The integrated marketing campaign kicked off last autumn and encouraged women to talk to their friends and family about the disease, as well as checking their own risk factors, such as high cholesterol.

The push encompassed TV, press, PR, digital, social media and in-store activity, such as offering free cholesterol tests. In addition, packs of the spread carried a code that gave consumers who purchased the product the chance to enter an online competition to win pedometers and weekend holidays.

Favourite brand Audi - he has owned five of its cars in succession and currently drives an A7.

Stork returns to TV with first new product for 20 years