Mildenhall on the advice that changed his career

Jonathan Mildenhall is set to become a parent in 2018, in more than one sense. First, he and husband Mirco (pictured, below) are going through a surrogacy process and hope to become dads to two babies – one fathered by each of them – this autumn.

"I kept on thinking I could put a lid on my paternal instinct and the voice that I have inside me," he says, explaining why, at the age of 50, the time felt right to start a family. But while that biological pull was always there, the decision to pursue his second act of creation is one that, prior to moving to San Francisco, he never would have expected to make.

Mildenhall’s other "baby" is 21st Century Brand, the marketing practice (as he describes it) that prompted him to leave Airbnb in October so that he could get it off the ground.

"Over the last 28 years I’ve been approached probably 10 times by well-financed companies to say it’s time you set up your own ad agency, and let’s fund you," Mildenhall says. "I never ever thought I was an entrepreneur. I didn’t really get the bug until I started working for [Airbnb’s] three founders [Brian Chesky, Joe Gebbia and Nathan Blecharczyk]. They’re building this thing of cultural significance and, I thought, I’d kind of like to build my own tiny little thing."

After 17 years at London agencies and seven more as  one of Coca-Cola’s top marketers, when Mildenhall joined Airbnb as chief marketing officer in 2014 he thought the job would be his "final hurrah". But then he arrived in San Francisco and fell in love with the tech industry. As well as feeling welcomed into a close community – "one of openness and collaboration", in which, he says, chief marketers are often found in one another’s offices – he became inundated with requests for help from tech bosses.

"I started helping a lot of founders figure out their approach to brand and marketing, but informally," he adds. After a time, he explains, it became clear that there was significant demand for such a marketing consultancy and that this was what he wanted to do. 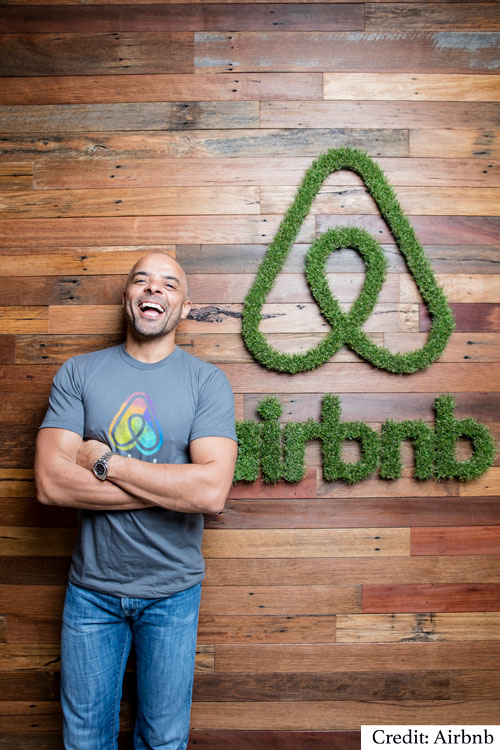 Mildenhall says he discussed his plans with Chesky over a period of months before making his announcement. He continues to work with Airbnb on the development of its premium service and the search for a new chief marketer (who, he claims, will be an "absolute rock star"), and he hopes his relationship with the company will be ongoing.

It’s not difficult to see why many of the big (and medium-sized) players in Silicon Valley want Mildenhall’s services. These companies are akin to juggernauts being driven at breakneck speed despite being at an early stage of their development, and it is fair to say that many have not given their brand or marketing plans due consideration.

"There are so many big cases of companies that came in, disrupted, but didn’t really build a brand and then became quickly obsolete," Mildenhall says, offering up Yahoo, Netscape and MySpace as examples. "Brands that have properly understood culture, that know how to insert themselves into culture in a way that transcends the specific technology or product or service, they’re the brands that are going to be successful."

While Silicon Valley is Mildenhall’s muse and focus, 21st Century Brand will not be restricted to tech companies. "After the news broke, the first wave of interest was from investors – in tech but also marketing services," he says. "Having conversations with investors from different worlds bolstered my belief that what I have to offer is really valuable and, potentially, won’t be contained to Silicon Valley tech companies."

It also applies to companies of a different vintage, such as his former employer. "Coke is a 19th-century brand, but definitely a 20th-century company that’s going through a radical transformation of its own," he says. "There are many companies like that, that have amazing brands, which are just not as relevant today as they could be."

It is not just consumer-facing brands where Mildenhall sees failures: he paints a gloomy picture of adland, as management consultancies Deloitte, Accenture and McKinsey continue their efforts to get into the game.

"The ad industry is struggling right now because it hasn’t yet figured out how to get everybody to understand exactly what core value the industry brings," he contends. "The thing that breaks my heart is that it doesn’t have enough positive standard-bearers, people who can stand up and make the whole industry feel excited about the talent in the industry and the ideas coming out of it."

"There’s a huge white space in the middle. Because of our experience and credentials, yes, we’ll build confidence that we know what we’re doing, but the way that we do it is going to inspire. And that is where the sweet spot for 21st Century Brand is."

Although Mildenhall has met several investors, he hasn’t yet taken any on – at the time of our meeting he says he plans to fund the start-up costs through a combination of his launch clients and personal funds from the sale of his house in London. It’s a symbolically important decision because it formalises his commitment to San Francisco. "It kind of breaks my mum’s heart because I’m closing the door on moving back to London," he laments.

In three years, Mildenhall has become hugely attached to the "City by the Bay", and not just because of the tech scene: there’s also its rich diversity and famously inclusive, progressive values.

While working at Coca-Cola and living in Atlanta, Mildenhall says he and Mirco felt less welcome. "I didn’t like living in Atlanta, socially, because we were an issue, socially," he adds. "Then we moved to San Francisco and, though we’re a same-sex, interracial couple, with European accents [Mirco is German], we’re literally invisible."

At Coke, Mildenhall says he felt a big responsibility to represent the LGBT community, but that’s no longer the case for him. "Coming to Airbnb, that team drove how the company looked, socialised, partied – it’s incredibly strong. But then you look at African Americans in tech, Hispanics, female leaders – none of those groups enjoy the profile or influence they should."

Making the tech industry more racially representative is one of Mildenhall’s missions. To ensure his words are backed up by "tangible actions", each 21st Century Brand client will be asked to sign up to an internship programme. The scheme will offer a way for young people from disadvantaged areas in the Bay Area – predominantly black and Hispanic – to get a foot in the door in an industry that is overwhelmingly white and Asian, and composed of people from privileged backgrounds.

"I feel I can genuinely be myself, unedited, unfiltered."

While Mildenhall, who grew up on a Leeds council estate, has some things in common with the teens he aims to help, there are few from any background who are blessed with his sense of self-belief. "I remember getting in my Ford Fiesta, driving down from Manchester to London, thinking ‘I have no idea what an ad agency does’. But I knew I liked ads, and had a sense the universe would take care of me," he recalls.

The way he describes the subsequent stages of his career sounds at times like a David Bowie-esque process of reinvention, though that’s not the musical comparison for which he opts. "Madonna once said with every album she releases she’s taking off a mask and getting closer to her pure self. I think every job I’ve had has given me an opportunity to peel off a mask and get more authentic," he says.

"When I was an account person in London, I was an industry showman. I would throw the greatest parties, I would wear Ozwald Boateng bespoke suits, and I knew that clients really liked to hang out with me. Then I got to Coke and became this corporate creative rebel. My flamboyance started to take a back seat and I was much more geeking out about creative.

"And then I moved to Airbnb, where the average person is young enough to be my son or daughter. I didn’t want to be known as a corporate Coca-Cola guy, so I overcorrected my behaviour to be down and cool and try to hang out with the millennials. But I quickly got rumbled." Now, he concludes: "I feel I can genuinely be myself, unedited, unfiltered."

Mildenhall isn’t blasé about the challenge he’s set himself after almost three decades of gainful employment – in fact, he admits to being "shit-scared" about all the trappings of establishing a business, not least the legal and financial due diligence. "My learning curve on building my business is vertical," he concedes.

But, at the same time, it doesn’t faze him. "Since my announcement, the amount of tech company CEOs, celebrities, VCs who’ve said, ‘I want to work with you, I want to work for you, I want to invest in you’, has been truly spectacular," he says. "What I’ve realised is the universe is not going to let this fail." 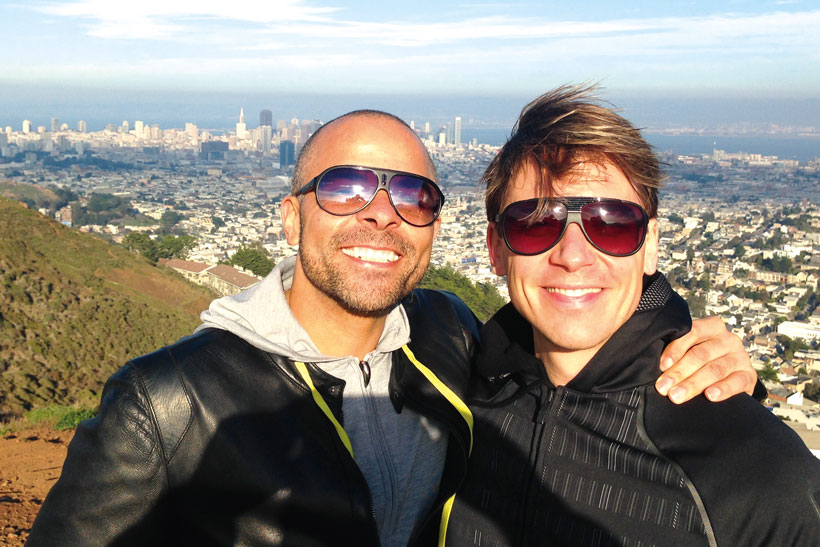 The way Airbnb dealt with negative stories about the platform being used to discriminate was the "proudest moment" of Mildenhall’s career. He says: "For us to go from headlines all over the US about discrimination, to us going out with an in-house [pro-diversity] Super Bowl ad just eight months later – there has never been a more effective company-wide address of such a massive issue."

Mildenhall observes that Uber has, in the past, struggled with "very basic human values we all expect and deserve", but he firmly believes new boss Dara Khosrowshahi is the right man for the job. "Dara is a very humble and human leader and the kind of CEO that could drive 100 people around the city in an Uber all day, and no one would think he was anything other than a kind and attentive driver," he says.

Mildenhall names Stitch Fix, which uses both artificial intelligence and human stylists to offer a personal shopping service, one of the most exciting emerging tech companies. "The science and the humanity behind it is awesome," he says. "It has the potential to transform the way that people consider their own style, their own maintenance."

CRM software company Salesforce hosts Dreamforce, a huge, annual, faintly cult-like, customer convention that reportedly brings 170,000 people to San Francisco. According to Mildenhall, the "genius" of Salesforce is "they understand the need we all have to be a part of a community. The loyalty they get because of people being part of that community will pay back for years."

This Mother's Day, say thank you with intelligent portrayals of parents

Mildenhall: in his own words

Airbnb's Mildenhall: listen to your mentors