Young people seen celebrating after getting their COVID-19 jabs.

Clips of young people celebrating after getting their COVID-19 jabs are to be showcased in a playful "Vax-Cam" campaign, devised by Ketchum for the Mayor of London's office, which is aimed at boosting the number of young Londoners being vaccinated.

The campaign was launched by the Mayor of London in a photocall at London Bridge, as part of the PR element.

It is inspired by the success of ‘kiss cams’ – where couples are picked out from the crowd at basketball games and other sporting events, and shown on giant screens.

Clips of Londoners who have been vaccinated will be covered with animations designed to look like cartoon stickers, with phrases like “Happy Jab Day.”

The campaign will be shown on selected cinema screens as well as digital billboards across London – including at iconic locations such as The Oval cricket ground and Piccadilly Circus. 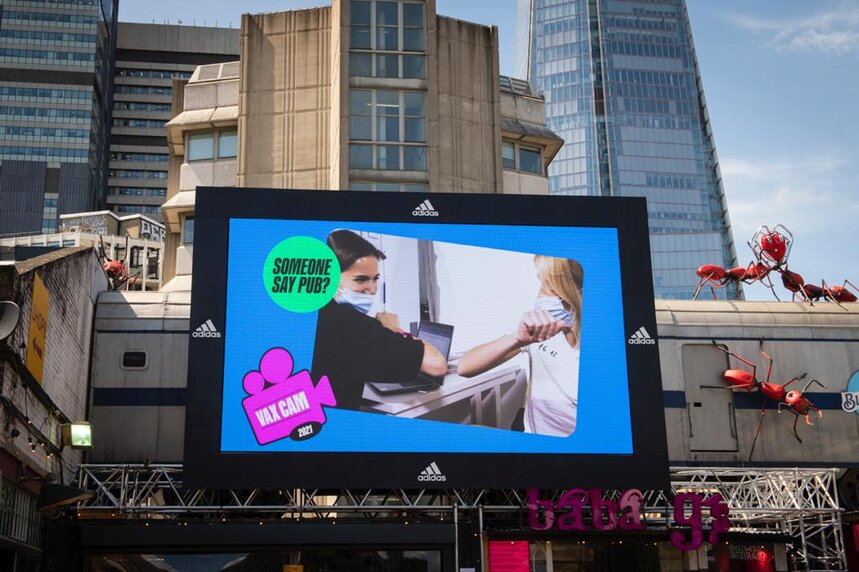 The vast majority of the digital billboards and cinema screens showing the campaign are doing so for free, to help increase the take-up of vaccinations in the capital.

A mix of earned, owned and paid channels are being used to promote the campaign.

People aged 18-35 are the target audience of the campaign, which is stressing the importance of getting vaccinated in ensuring that restrictions are lifted later this month.

Other key messages include the importance of getting both doses of the vaccine as soon as possible, and that getting vaccinated is quick and easy.

'One step closer to freedom'

Kat Dare, practice director at Ketchum, said: “We hope this fun, uplifting and positive campaign resonates with young Londoners and inspires them to go and get jabbed against COVID-19. We want it to remind people that we’re all in it together and if we all play our part and get the vaccine, we’re one step closer to celebrating a return to freedom and life returning to normal.”

She added: “We wanted to play our part in helping get the vaccine out there, so we approached The Mayor of London’s team with the Vax-Cam creative, and we are delighted to see it go live on billboards across the city."

The Mayor of London added: “It’s really important we continue to boost the number of young people coming forward to be vaccinated. We are already seeing the big difference that the vaccine is making in our fight against the virus, but the next two weeks are absolutely crucial in ensuring restrictions are lifted."

A version of this story first appeared in PRWeek.

Ladbrokes partners with #WeMakeEvents to light up iconic music venues