The ad watchdog has given the green light to a press ad for campaigning group Go Vegan World that described in vivid language how calves are separated from their mothers shortly after birth. 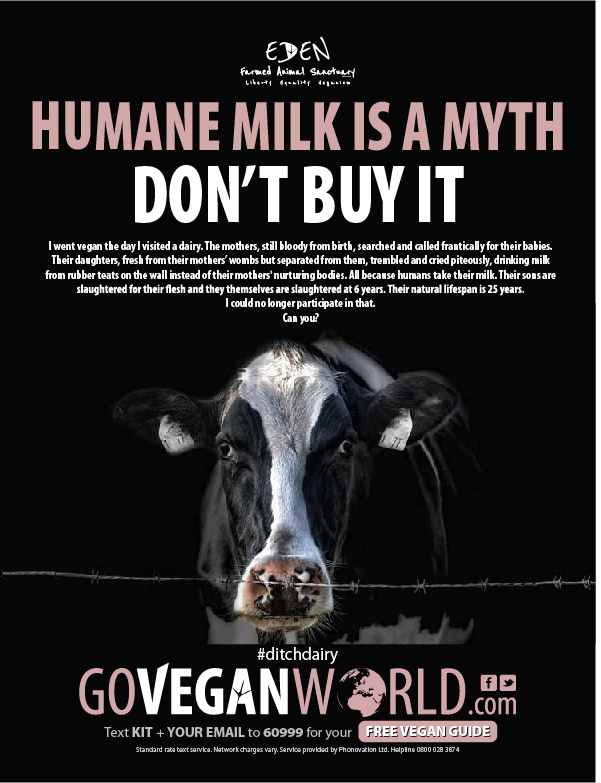 Seven people complained about the ad, which appeared in The Sunday Telegraph in February, headlined: "Humane milk is a myth. Don’t buy it."

Smaller text underneath read: "I went vegan the day I visited a dairy. The mothers, still bloody from birth, searched and called frantically for their babies. Their daughters, fresh from their mothers’ wombs but separated from them, trembled and cried piteously, drinking milk from rubber teats on the wall instead of their mothers’ nurturing bodies. All because humans take their milk. Their sons are slaughtered for their flesh and they themselves are slaughtered at six years. Their natural lifespan is 25 years. I could no longer participate in that. Can you?"

The complainants, some of whom had worked in the dairy industry, believed that the ad misrepresented how dairy cattle were treated in the UK – pointing to the phrases "still bloody from birth" and "their daughters, fresh from their mothers’ wombs but separated from them".

They argued that the ad implied that a significant number of dairy farms failed to comply with UK animal welfare standards, the Advertising Standards Authority said.

In response, Eden Farmed Animal Sanctuary, the group behind Go Vegan World, said the ad was designed to publicise the fact that calves were separated from their mothers not long after birth, but did not state or imply a particular time scale – in particular, the 24 hours deemed as preferable by the Department for Environment, Food & Rural Affairs.

The ASA said most readers would not have specialist knowledge of the dairy industry and would take the ad’s copy to mean that calves were separated from their mothers very soon after being born, rather than as a comment on compliance with specific welfare standards.

Sandra Higgins, director of Go Vegan World, said: "The aim of the ad is to let people know that no matter where the milk and dairy products they purchase have come from, whether an industrial-scale dairy farm or a smallholding, for each cow, legal, standard practice necessitates her pregnancy, the removal of her calf, and her slaughter, so that we can drink the milk that she produced to feed her infant.

"The ad highlights that the problem faced by animals in the dairy industry is not how they are treated, but that they are used at all. It pertains to animal rights: the right of other feeling beings not to be our property and not to be used by us for our ends."

Higgins added that the timing of the separation of mother and calf was irrelevant to the ad’s message. "To most people, separation at 25 hours is as unjust as separation at 24 hours," she said.