The craft beer brand from Greenwich, London, is taking its popular brewery tour on tour.

M&C Saatchi has devised a new model for directing marketing investment. Campaign reports that the formula is based on research conducted in partnership with Unilever and Nielsen and steered by the agency group’s new research centre, The Saatchi Institute. The formula sets out to map "the correlation between the investments in the art and science of a brand and their financial impact".

The news was announced at M&C Saatchi's 20th birthday celebration (HB, guys!). Maurice Saatchi waxed lyrical on the development, saying, "The new Saatchi Institute proposes a formula to separate the combatants and start a peace process" between the arts and science. Which is a shame, we love a good (non-violent) fight. 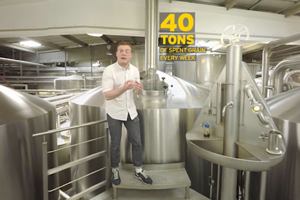 Another brand has turned its hand to virtual reality. This time it's London craft brewer Meantime who have launched a virtual tour of their brewery using Oculus Rift software and the Samsung Gear VR headset.

The tour will be used with people in the industry, at Meantime beer and food tastings, and it will be going on tour at UK festivals such as Wilderness and On Blackheath to give punters a virtual taste of the popular tour. Every year, the brewery in Greenwich, London, welcomes 15,000 people through its doors for a guided walk around.

The virtual tour is lead by beer sommelier and tour guide Jethro Holman, and it was made by virtual reality videographers, producers and developers Visualise.

You can try it out on a desktop with a video on Meantime's 3D virtual tour page. Click, hold and drag your mouse to shift the perspective.

News broke yesterday of Waitrose entering the supermarket price war combat zone, as we like to call it, with a new twist on discounts.

Marketing's Sara Spray reports that Waitrose customers can choose to save 20% on 10 items from a 1,000-strong list. The selection is effectively locked until the end of the summer, encouraging repeat purchases.

Commenting on the news, brand consultant and retail watcher Kate Jones lauded the scheme because it focuses on customer satisfaction.

It could be a game-changer as much as Tesco Clubcard was in the ‘90s, with the big differentiating factor that it is shoppers themselves who call the shots.

But we see this going further. While Waitrose does make 10 suggested picks when card members log in to make their choices, we'd have loved Waitrose to use their data more effectively to take the hassle out of picking. Choice is one thing, saving time and money is something else entirely.

Still, let's not get too down on Waitrose. In light of the news that, according to a three year data study from Nielsen, 60% of brands stocked in supermarkets are losing money thanks to warring supermarket giants, Jones notes that Waitrose aren't passing on the whole cost to brand owners. Waitrose are reportedly funding 50% of the potential £260m costs.

On social: It's the Brand Republic Digital Awards tonight!

We're gearing up for the Brand Republic Digital Awards tonight, and spent rather too long working out how to interpret the dress code - Dress like you're a winner (party/smart casual).

We've gone with smart trousers and shoes, a casual jacket and a shirt that says party (we think). Although it looks like someone just instinctively knew what they were going to wear: 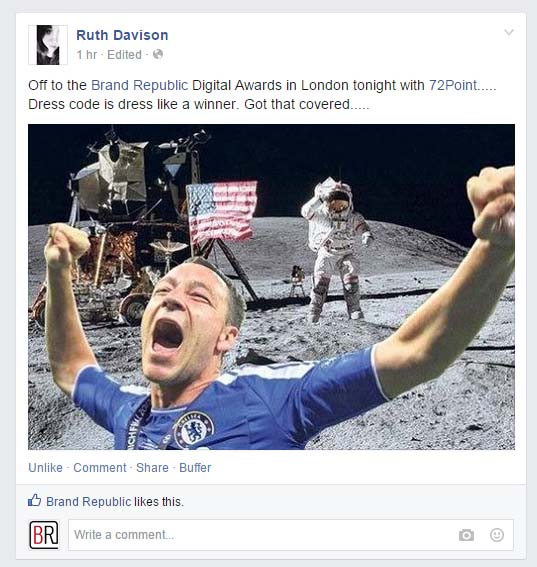 If you're going, make sure to say hello to the person in the Chelsea strip. And everyone else can follow the fun with the hashtag #BRDigitalAwards on Twitter, Instagram and Vine.

Good luck to all the shortlistees!

This week's Campaign column by Dave Trott deals with an eternal truth of communications:

People aren’t waiting to engage with us… We have to do the work of making them notice, otherwise they won’t.

Read Trott's complete piece here, but fair warning, the article talks about, and shows, a famous photo of a young woman falling from a building. Not for the faint of heart.