Visa Europe's chief marketer wants its Olympics tie-up to do more than raise brand awareness around London 2012: he hopes it will change our payments behaviour, too.

Mariano Dima's mind is not fully on the job the day Marketing meets him. It may be less than five months until the start of the London 2012 Olympic Games, and the culmination of a five-year marketing strategy, but Visa Europe's chief marketing officer is, understandably, somewhat distracted by the arrival of a new member of the Dima family.

Nonetheless, the Italian-Argentinian has taken time out of his paternity leave to discuss the company's plans, with only days to spare ahead of the launch of Visa's flagship pre-Olympics ad campaign starring Jamaican sprint champion Usain Bolt.

This will be the 'year of deliveries', jokes Dima, but the stakes could scarcely be higher for a brand that has invested such effort in ensuring its Olympic sponsorship delivers a tangible change in behaviour.

The campaign, created by Saatchi & Saatchi, advances the company's 'Life flows better with Visa' creative theme to focus on the speed of its latest contactless and mobile payment products, which allow users to pay for goods by simply holding a card or device next to a terminal.

Although the former Vodafone and PepsiCo marketer claims Visa is content with the current level of take-up, with 20m or so contactless cards in the UK, the frequency of transactions has not grown at the pace that some may have hoped.

The brand's forthcoming marketing activity, therefore, is intended to raise awareness and help usher in a much wider acceptance of the new technology.

In the pan-European TV ad, which carries the updated tagline 'Flow faster with Visa', Bolt races an unknown rival from the airport to London's Olympic Stadium in a playful reinterpretation of the brand's breakthrough 'Running man' campaign from 2008.

'We know that the concept of "Running man", that somebody with a Visa card is able to achieve whatever he wants to achieve, is understood by consumers,' says Dima. 'Speed is one of the key benefits of our new products, so we thought about refining what we mean by "better". In the context of the Olympics, we thought, who is the fastest man on earth? That is where Usain Bolt comes in.'

Unlike many Olympic sponsorships where the primary objective is to increase goodwill - not to mention sales - through an association with the Games, Visa has set itself the lofty objective of using the event to change the perception of its brand from a traditional payments facilitator to a technology company.

Throughout our conversation, Dima makes remarkably little reference to such trifling matters as debit and credit cards - Visa's core business for decades. Instead, the brand is striking up partnerships and alliances with mobile handset manufacturers including Samsung and networks such as Vodafone in a race to become the de facto provider of new payment technology.

Dima explains: 'People are moving away from just card payments, so we must start building up the understanding that, although Visa has been here for 50 years, we are trying to innovate. For us, this is not so much a campaign, as a showcase of our innovation.'

By the time the Games begins on 27 July, there will be approximately 100,000 terminals in the UK accepting contactless payment, 3500 of them in the Olympic Park. Through Visa's partnership with Coca-Cola, the technology will be included in its soft-drinks vending machines. Four thousand London taxis will be fitted with contactless terminals, and Transport for London is aiming to fit the devices to 8000 London buses. All this in the drive to reach the 'tipping point' beyond which such a payment method will become the norm.

However, Dima concedes that the Games may come too soon for the more advanced mobile payment methods, including near field communications (NFC)-enabled handsets. 'There may not be hundreds of thousands of phones using (NFC), but there will be significant pilots from banks and operators,' he says. '(The Olympics) will be a good showcase of this functionality. It is really about redefining how people use their phones. But it may take a little more time to make mobile payments a reality.'

The Olympics will not be entirely plain sailing for sponsors, though. Visa experienced its own public backlash last year when people trying to buy tickets to Olympic events discovered that they could use only Visa payment products to complete their transactions; LOCOG was forced to defend the company's role. However, Dima dismisses any notion of a long-term 'bad reaction' from consumers.

The brand's ambitions may also be threatened by the sheer volume of marketing surrounding the Games, both from sponsors and non-sponsors. Recent surveys have suggested that awareness of official Olympic partners is lagging among the UK public, with one poll even citing non-sponsor Nike as the brand most associated with the Games.

Dima concedes that Visa has 'expressed concerns' to the International Olympic Committee about the search for 'new categories and brands' for sponsorship, and that the level of marketing 'noise' around the Games will prove challenging. Nonetheless, he believes that the brand's more entrenched association with the Olympic movement will stand it in good stead.

'We have seen awareness (of Visa as an Olympic sponsor) increase dramatically in the UK over the past three to four years,' he says. 'We track it monthly, and in most markets we are in the top three brands. I think that reflects well on the job we have done from (the 2008 Olympics in) Beijing onwards, working closely with LOCOG and the Team 2012 Visa athletes.'

While the likes of Jessica Ennis and Mo Farah have become a regular feature of ad campaigns by a wide range of brands, Dima claims Visa's longer-term association with athletes will reflect well on the business.

In the UK, Visa is the presenting partner for Team 2012, a group of more than 1000 of the nation's Olympic hopefuls, while through Team Visa the brand supports 20 athletes from across Europe.

'For us the Olympics is not tactical, it is fully embedded in the way we work,' says Dima. 'I know some sponsors just want to use the Olympic logo and feel related to it. The important thing is that we've been supporting the athletes for a long time, helping them to achieve their dreams, which is something we're proud of.'

However, Dima warns that one should be very 'careful' about judging the success of an Olympic marketing campaign simply on the basis of consumer awareness. 'Success (for us) will be defined by whether people understand our new technologies and solutions that modernise the perception of Visa as a technology company,' he says. 'If, on the last day of the Games, you do some research, and you spend £10m on advertising on that day, you'll register very high - but it's too late, isn't it? People actually changing behaviour - that will be our key legacy.'

With the 'Life flows' campaign poised to move on from London 2012 to new platforms, including the 2014 FIFA World Cup in Brazil, it would surely be tempting for Dima to revel in a sense of accomplishment and consider a new challenge outside Visa. With experience across sectors at brand owners such as PepsiCo, Pentland Brands, Vodafone and Levi Strauss, he would certainly bring a well-rounded marketing experience to any business.

However, the marketer insists that he is 'having fun' at Visa and will not be leaving any time soon. 'I don't know many careers where you can launch specific, ground-breaking technology which will change the way people behave,' he says. 'There is so much going on in payments, with everyone from Google and Apple getting into the space. It is a great place to be.'

With that, Dima is off to tend to more pressing family matters, for now at least. Like many who have experienced previous Olympic Games first-hand, he confidently predicts a summer to remember, and that the UK will 'explode with joy' at the country's first gold medal.

Yet one suspects he will not be enjoying it quite as much as the rest of us; not until he sees the figures that prove contactless payments are going through a little more frequently than they are now. 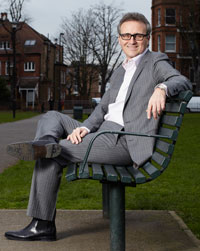 Hobbies: 'I love running and triathlons, when I have time. It is my passion.'

Olympic tickets: 'I have tickets to the Paralympic Games.'

Most-anticipated Games event: 'Because of our sponsorship of Usain Bolt, I'd have to say the 100m.' 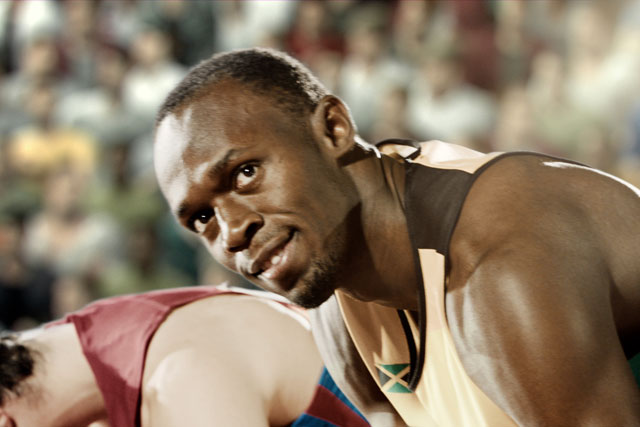 On Saturday (17 March) Visa Europe will roll out its biggest campaign ahead of the Olympic Games. The activity is focused on promoting the brand's new contactless and mobile payment technologies.

The TV ad features the brand's 'Innovation Ambassador', 100m world record-holder Usain Bolt, racing through the streets of London against an unknown adversary to the sound of the track Hundred Mile High City by Ocean Colour Scene.

The contest begins at the airport. By using Visa products, both athletes are able to change clothes and arrive on time at the Olympic Stadium.

Bolt settles into the starting blocks and looks up to see that his competitor in the race across the capital was the starter for the sprint. The rival fires the starting pistol and the camera pans out to reveal the stadium from above, ending with the tagline, 'Flow faster with Visa'.

It will be supported with promotional activity, including the chance to win London 2012 tickets through its microsite, Visa.co.uk/goldenspace.

The campaign will subsequently be rolled out across digital, print, radio, cinema and both traditional and digital out-of-home sites across Europe.

Non-sponsor Nike is brand most associated with Olympics