The man charged with fixing the problem, Vodafone's chief operating officer and director of commercial and customer operations, Neil Blagden, said that the company had come a long way.

The root causes of the problems, for which Vodafone was fined by Ofcom, were identified as outdated technology and poor training.

At the time, a Vodafone spokesman said the failings were due to errors made during a complex IT migration which involved moving more than 28.5 million customer accounts and almost one billion individual customer data fields from seven legacy billing and services platforms to a single system.

Since then, the data migration has been completed and Vodafone has been consolidating its outsourced call centres into ten core hubs, six of which are in the UK.

"We found that we had too many undersized locations through third-party providers. Instead of a centre of 50, we are now moving towards centres of 600 with a full leadership team in place. We’ve shut down 12 of these smaller call centres," Blagden told journalists at a media briefing yesterday.

Fixing all this has been keeping Blagden and his team busy but things are looking up and the company is keen to look for ways to raise the customer service bar even higher.

"We’ve gone from 794 Ofcom complaints in December (our highest ever) to a figure that’s now just above the industry average," Blagden said. While he could not disclose the current figure due to an embargo placed by Ofcom, he could say that 794 was around four times the industry average.

"Now we’re out of the wilderness, it’s time to turn the dial up and establish Vodafone as a leading industry benchmark," Blagden said.

This involves a wave of new digital initiatives as well as new deals for customers such as the Total Rollover for UK pay-as-you-go customers. Customers will be able to use all the credit they’ve paid for rather than the "use it or lose it" approach they’ve had to accept. 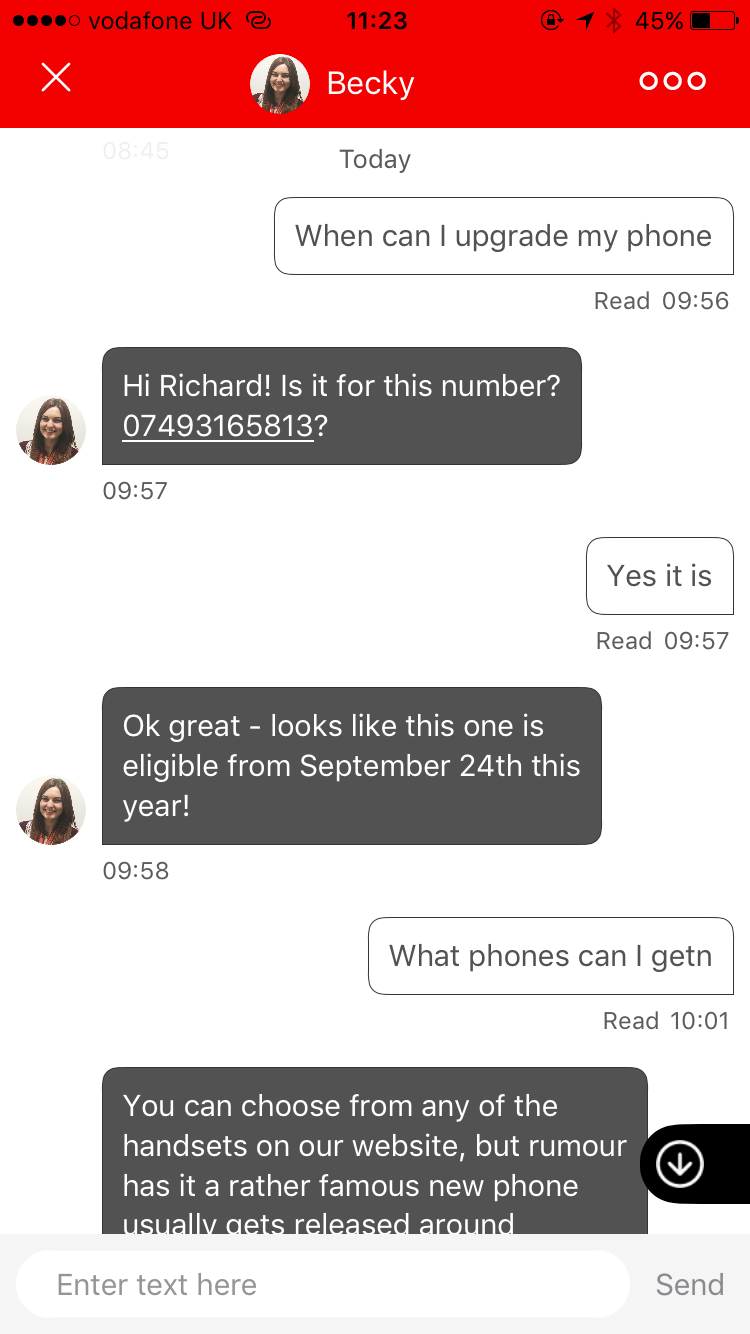 Vodafone has been trialling a "message us" service with about a million of its customers in its My Vodafone app which lets customers start and re-visit conversations with advisers.

"The major difference is the way customers can now interact with an agent. No more setting aside time for a call, or losing an agent on chat because you were distracted," Richard Clarke, head of contact transformation, explained. "It works with the customer’s lifestyle."

The system will reconnect customers to an agent they have had a previous successful conversation with and keep a history of their chats. Later this summer, it will also add a group messaging feature so agents can bring in other experts while staying in the chat. 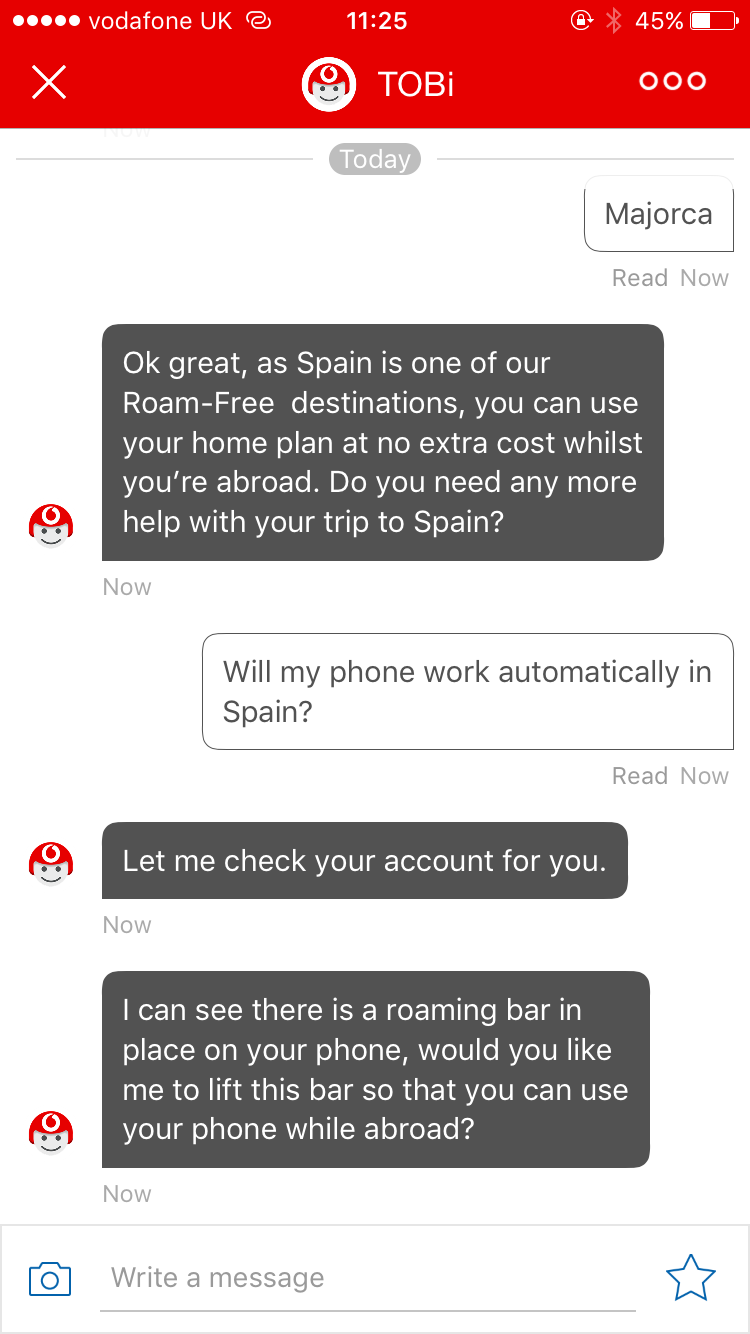 In April, Vodafone launched its Watson AI-powered chatbot, TOBi, which was geared to respond to popular support questions. Now, TOBi’s role is being expanded with an integration into customer account-enabling the bot to answer customer-specific questions such as data-roaming charges and phone capabilities.

"TOBi started out being able to answer about 112 intents; now he can respond to around 150, or about 70% of the typical queries from customers," Clarke said.

Which is not to say that TOBi will be handling that high a volume. If customers prefer to speak to an agent they can at any time.

Vodafone has also been trialling the ability for customers to register a voice print, freeing them from having to remember pins and passwords.

"The voice recognition tech has been pretty good and working around coughs and colds," Clarke assured. "If there are any problems, it will default to the old system."

The call-in function has also had an upgrade and rather than listening to an endless menu of options, customers can now just state their problem.

"We have about 310 intents programmed into the natural language system and it’s resulted in 25% less call transfers since it’s been implemented," he said.

The mobile operator also plans to bring its customer service capabilities to Alexa, and expects to launch the skill "imminently", Blagden said.

"We’ve been trialling it internally and it will let customers ask Alexa about their phone bills, the amount of data they’ve used and so on," he said.

It’s interesting, Clarke observed, that after trying to minimise voice customer-service with TOBi and the messaging service that they have come full-circle back to voice with Alexa.

"It’s a sign of how far voice technology has come," he observed.

Vodafone 'talking to Openreach' about major investment in ultrafast broadband

Welsh steps down from Vodafone

BT is the most complained-about broadband provider

Behind the scenes of Vodafone's Martin Freeman ad