Vogue, the Condé Nast fashion title, has produced 275 pages of advertising in its March issue - the largest number in a March issue in the 100-year history of the magazine.

It represents a year-on-year increase of 27 pages carrying ads, including from brands such as Apple, UBS, and Issey Miyake. Debut advertisers include designer label Christopher Kane and ba&sh, the women's clothes brand.

Vogue said it would also take out press ads for the March issue – billed as an International Collection Special – in The Times and The Evening Standard. 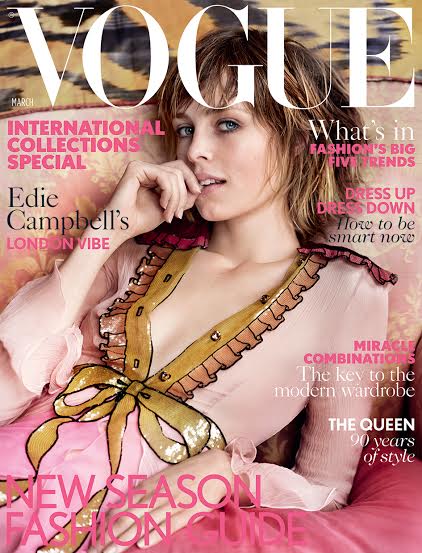 Model Edie Campbell fronts the magazine. The issue also includes a supplement, sponsored by Westfield, called "Shop the season: what to buy and how to wear it".

Vogue celebrates its 100th birthday in the UK this year, having launched in September 1916 under the editorship of Elspeth Champcommunal. It launched in the US in 1892.

Stephen Quinn, the publishing director at Vogue, said: "We are noticing a significant bounce from the announcement of our centenary plans. March surprised us all by being up a stunning 27 pages to a record high for a March issue with 275  pages.

"It is a magnificent beginning to the centenary and the response from the fashion and beauty world proves that Vogue remains the definitive fashion magazine, with print still very much at its heart."

Women's interest media gets a makeover