But which video in a series of five does it happen in? You'll just have to watch them all. Clever Samsung. 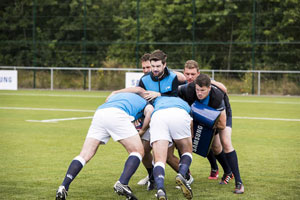 The idea is to demystify the sport ahead of the Rugby World Cup, with Whitehall as the baffled everyman trying to grasp the rules under the scornful eye of rugby legends including Martin Johnson and Lawrence Dallaglio.

Read on for comment from Russell Taylor, Samsung’s chief marketing officer in the UK and Ireland, including why not being able to mention the Rugby World Cup isn't a problem.

Congratulations to Angus Mackinnon who's taken the responsibility for running the department and taking the lead creative role on key accounts at Poke, the Publicis UK digital agency.

Check out more comings and goings in adland.

Opinion: Welcome to the age of brands as broadcasters

Adam Fulford, managing partner at Mindshare, thinks "we are truly at the dawn of an age where we should consider brands as broadcasters." We can't argue with that (if you do, Fulford explains himself in the first half of the opinion piece), so let's skip to the good bit: three core themes a Mindshare study identified that help brands succeed as broadcasters.

Read Fulford's piece on the age of brands as broadcasters.

So says Timothy Armoo, founder of influencer marketing business Fanbytes, in Marketing Magazine. Why? Because "reach sucks." What's so great about engagement, eh?

The single biggest thing that influencer marketing has brought to brands is engagement. You can get awareness with any of the mediums such as Google or Facebook. The ability for brands to be able to leverage the relationship between influencers and their audiences and to directly engage with them is a unique value proposition. By optimizing campaigns for engagement, the amount of people who actually engage with a campaign as opposed to reach, adds an incentive for agencies to create the most compelling content that gets people talking. In essence, they know that the more they can do this, the happier the client.

Dave Trott: People don't miss what they never had

We hate summarizing Dave Trott's column each week. If you don't read the whole thing, the kicker is never as good.

So this week we're just going to extract and paraphrase a lovely anecdote about this classic Red Rock Cider ad.

The original brief, Trott writes, "was for a cider with a totally different taste. So Nick [Wray, who wrote it while at GGT] used Leslie Nielsen, from Police Squad, with the strapline: 'It’s not red, it’s got no rocks, and it doesn’t taste like cider.'"

But of course, the client changed their mind, and decided their product did taste like cider after all. "We lost the whole reason for the line", says Trott, but they kept what was left and it became an iconic phrase.

Ever wondered who coined the term 'brainstorm'?

If you don't think 'Compare the Market' is the best UK TV ad of all time, act now

They think it's all over. It definitely is now