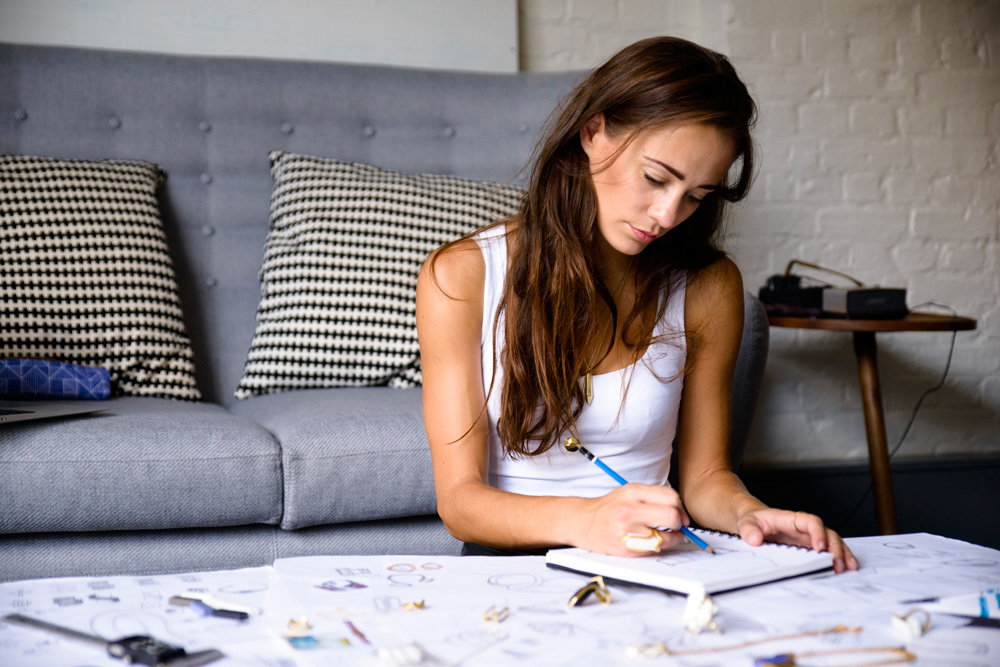 Nicola Kemp asks Kate Unsworth, founder of fashion tech brand Kovert Designs, how it is helping to design technology out of people's lives.

The greatest reflection of our priorities is how we spend our time. According to research cited by wearable tech brand Kovert, the average person checks their phone 150 times a day. The smartphone has become all-encompassing. Yet, instead of aiding connection, a growing tranche of research suggests that there is a fundamental disconnection between the solutions technology proposes and the impact it has on consumers' lives. It is a schism that is having a significant impact on the evolution of wearable technology.

One of the brands at the forefront of this evolution is Kovert. A fashion-focused tech company, founded by Kate Unsworth (pictured, above and below), it creates jewellery that can act as a filter between consumers and their mobile phones. When Natalie Massenet, founder of online fashion retailer Net-a-Porter, saw Unsworth speak at an event put together by innovative VC group Founders Fund, she realised Kovert would be a perfect fit with her own brand. As the UK's leading premium ecommerce brand, by sales, with some of the most valuable web pages, Net-a-Porter has been known to single-handedly make a brand. It has now forged a deal with Kovert that will include the launch of a range of designer partnerships with other Net-a-Porter brands.

It is clear that Kovert is not a typical wearable-tech company; notably, it defines itself firmly as a fashion brand in a sea of technology-first rivals. Kovert Designs' products include bespoke rings and necklaces that allow the wearer to receive selected notifications from their mobile phone. The products are designed not just to empower consumers to keep their smartphones out of sight, but also to look stylish.

Women increasingly recognise that you can be sucked into the vortex of the internet, but don’t want to risk switching off altogether

"We want to live in a world where technology is unobtrusive. So the first part of the design is that the technology has to be invisible," explains Unsworth. "A lot of the wearables industry has been gimmicky or showing every notification, such as wristbands that flash when you get a message."

In many ways, this first wave of wearables leaned heavily on the validation economy, which is part of the very fabric of our digitally driven lives. Herein lies Kovert's USP: it doesn't believe technology is key to validation.

"Technology is less of a status symbol for women," explains Unsworth. "As a generalisation, women are more interested in the aesthetic element of the gadget, rather than broadcasting the fact they are connected at all times."

Connectivity at all costs

Marketers face a challenge as connectivity has become more than a utility; it is the virtual air consumers need to breathe. Multiple studies report the disabling impact of being without a smartphone. According to findings by consumer research specialist Intersperience, 55% of smartphone users constantly interact with their device and 65% say they would "feel lost" without it. In line with this, Unsworth is concerned that technology is teaching the art of almost constant distraction.

Yet even though consumers are becoming more concerned about the amount of time they dedicate to their devices, being connected has become so synonymous with a feeling of safety that, for many, simply switching off is not an option. "Women are looking for more ways to manage their lives," explains Unsworth. "They increasingly recognise that you can be sucked into the vortex of the internet, but don't want to risk switching off altogether."

A design for a tech filtered life

The rationale behind the Kovert brand fits with the trend toward greater unbundling of products and services. "We were told by advisers that we had taken too much out of our products and made them too simple, but we found that there was a cliff with consumers and if you added too many elements, they wouldn't be interested in the product. Silicon Valley just didn't understand that," says Unsworth.

Certainly the gap between what Unsworth believes her target audience want and what Silicon Valley prescribes is a key point of tension. "We want to appeal to all women of all ages and all walks of life, from busy women with families to young professionals," she adds. "What brings these women together is they recognise the negative effects of the internet and want to better empower themselves."

The digital detox: beyond the shackles of the smartphone

The concept of the digital detox has entered the mainstream and the anxiety that some consumers feel about the impact of technology shows no signs of abating. The World Health Organization predicts that, as the 21st century unfolds, the most prevalent disease will not be, for example, heart disease or AIDS, but depression; it says a staggering one in four of us will be "affected by it". Further research suggests that members of Generation Y are showing greater concern about the negative impact of technology on their lives, such as the potentially addictive qualities of social media and compulsive smartphone use, and want to exert greater control over their devices.

Will Seymour, senior analyst at consumer trends agency Future Foundation, says: "Control of tech devices has become part of the vision of a 'perfect you' among consumers."

It is notable that a personal 'digital detox' by Unsworth helped to shape her brand. "Designing technology out of your life is at the heart of what we do," she explains. "I was run into the ground and I realised that technology was making me a bad friend. (After) I did my digital detox for two weeks, I felt reborn."

Unsworth describes her experience as having been akin to a bubble bursting. "I realised that everything had been muted. I hadn't been living in the moment, I was always replying to emails - I wasn't present."

As a mathematician, Unsworth is keen to point out that the brand hasn't done enough research for the findings to be "statistically significant"; nonetheless, she says those who wear Kovert products report significant changes in their digital consumption habits. "They sleep better and are more present in the moment as they have that confidence to not look at their phone," she adds.

"Some people are reassured by constant connectivity, but we are starting to see a backlash," says Unsworth, who believes this is not a fleeting moment, but a long-term shift in how consumers view their technology.

"For me, it is all about breaking free of the 'smartphone shackle'. I love having the ability to tap in and out, but the risk is (that the smartphone) becomes limiting and does not allow us to be the people we deserve to grow into. We lose track of what is important and that has to change."

The notion that more technology is the cure for the relentlessness of our always-on, digitally driven culture may at first seem counterintuitive. However, as the banks between our virtual and real worlds burst, consumers are seeking ways to stem the tide.

It is perhaps apt that technology proposes to cure the problems of its own creation.

Product of the Year 2015: on-the-go and convenience brands triumph at awards