'Weight Watchers, maybe it'd be a good idea to suspend your #ThisismyWW sponsored trend at the same time World War 3 is trending'.

WW (formerly known as Weight Watchers) has kicked off a social media campaign to coincide with the new year as people's focus moves on to healthy living and weight-loss goals – but the timing has been unfortunate, as some Twitter users have spotted.

The company, which rebranded to WW in 2018, promoted the hashtag #thisismyWW today (Friday) as part of a broader campaign to promote how its dieting plan works.

However, with fears mounting over an escalating crisis between Iran and the US, other hashtags referencing "world war" have also been trending on Twitter, meaning the brand appeared alongside hashtags such as #WW111 and #WorldWarThree.

"Man, Weight Watchers with the world's worst-timed promoted trending topic during the start of WWIII / World War 3," one person tweeted.

"Somewhere there are a handful of brand managers and a whole advertising agency freaking the fuck out at the timing of their new Weight Watchers campaign/rebrand," another wrote. 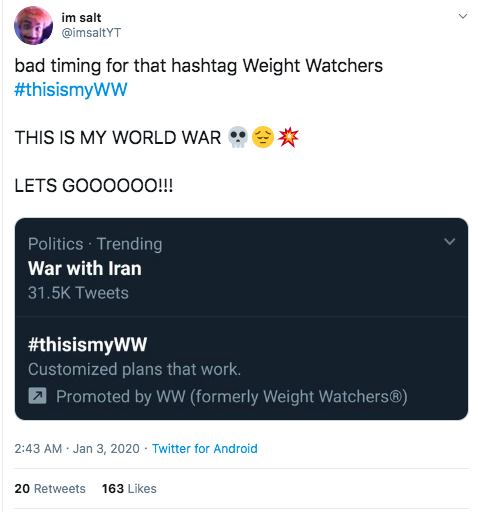 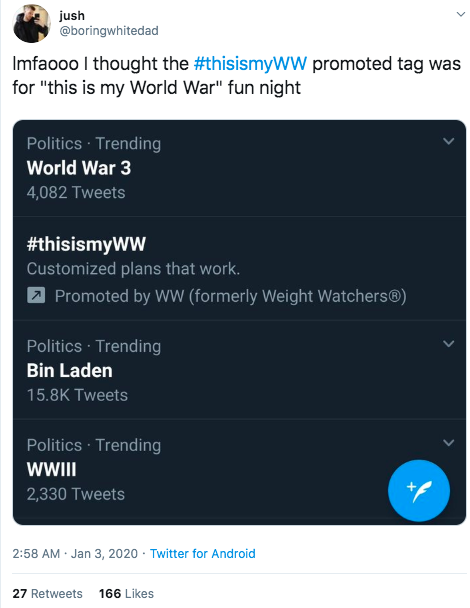 Another tweet seemed to imply the timing was deliberate. "World War 3 and war with Iran are trending but that’s no reason to let your figure go," a user tweeted. "How is this real life."

The campaign appears to have launched on 26 December, according to WW's UK Twitter page.

Yesterday, WW chief executive Mindy Grossman asked followers on Twitter: "How do you make the #myWW program YOURS? Whether that’s meal prep, a workout routine, or your support network — sharing your key to success with #thisismyWW is a powerful way to inspire others to adopt #WellnessThatWorks."

Campaign contacted WW, but the company did not respond to requests for comment.

Reflections from a working mum, one year back in the industry

Nostalgia and eclecticism: A sociologist's view on social media's impact

What a disabled-led cast taught me about challenging stereotypes