With the transformation of Dentsu UK now 95% complete, how will the group leverage its new-found integration to better service clients?

Think of Dentsu UK and you might conjure up an unwieldy, difficult-to-navigate, complex business, with so many capabilities that clients, prospects and even employees would struggle to see their way through.

Following a succession of leaders and a rash of acquisitions (including data specialist Merkle and contract publisher John Brown Media), Dentsu's UK performance was disappointing in the years before the pandemic.

The size of the business and its headcount shrank as media billings for the UK operation of Dentsu Aegis Network (as it was known at the time) fell 9% and 13% in 2018 and 2019 respectively, according to Nielsen estimates for Campaign’s Agency School Reports.

When Euan Jarvie (pictured below) first stepped up to be UK chief executive in February 2019, from his previous role as president of global clients, it was a “real situation”, he says.

There were 28 brands, 26 chief financial officers and 90 legal entities within the business, as well as more than 18 office buildings across UK and Ireland.

On top of three offices in Edinburgh that faced each other, Dentsu had more than 10 sites in London and four in Manchester.

Today, it has reduced its real estate by more than 60% and is down to nine locations – partly in response to the pandemic and new ways of flexible working. 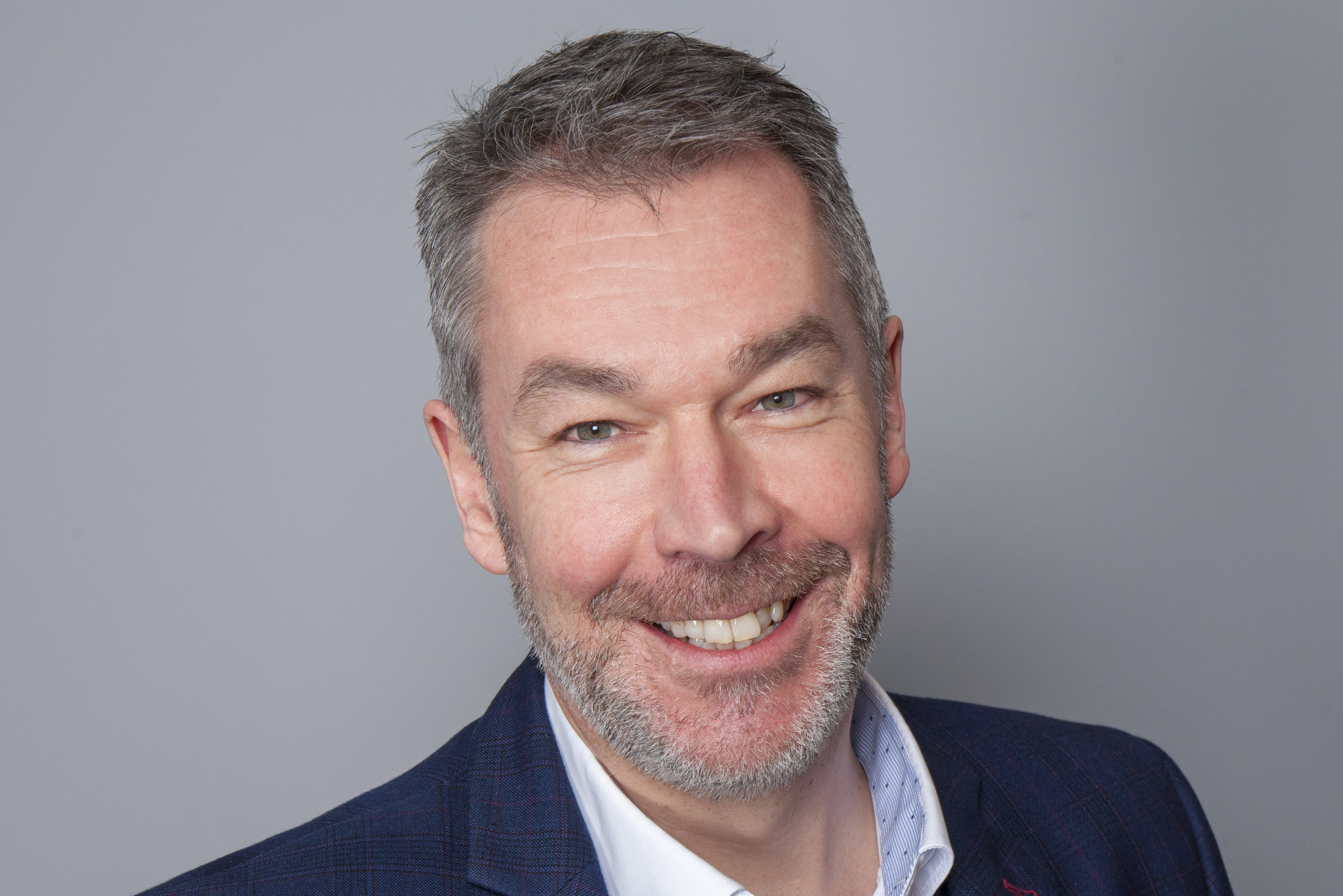 Jarvie, who lives in his native Scotland, recalls standing on a street in the centre of Edinburgh, where a building to his left housed Carat, another building to his right was home to Merkle and behind him were Isobar’s offices.

“This didn't seem like a very good idea,” Jarvie, who previously built MediaCom’s operations in Edinburgh before moving to global roles and joining Dentsu in 2014, tells Campaign.

“Maybe it was the Scottish penny-pinching in me, but the thing that people love about agencies is the fact that you get to meet and work with such great diversity of talent, intellect, and culture. So, let's put people together.”

That fits with recently rebranded Dentsu International’s edict to slash the number of global agency brands from 160 to six by 2022 and become “the most integrated agency group in the world” with three lines of business: creative, customer experience management (CXM) and media.

The group, which houses Dentsu’s businesses operating outside Japan, is in the middle of a turnaround under a new global chief executive, Wendy Clark, who joined from Omnicom’s creative network, DDB, and started in September 2020.

One of her first moves has been to improve the creative capabilities of Dentsu International, which has its roots in media as Aegis Group in the UK.

The Covid period has been brutal but there have been signs of recovery as Dentsu International’s organic revenue growth turned positive in March and grew more than 17% in April, Clark told investors on its most recent earnings call.

'Get back to doing genuinely world-class work'

Jarvie believes Dentsu UK is on a path to brighter times. “We've been very consciously quiet for the last 18 months for a very good reason," he says. “Now, it’s time to get back to doing genuinely world-class work that's recognised everywhere. I think we're doing that in media, creative and CXM now. I think we were doing it before, in pockets, but now it's much more standardised.

“We have to make sure that integration is not a conversation, it's actually a practice. Everyone's talking about it, I just don't think many people do it very well. The best way of doing it is that the leaders of organisations have got to provide every opportunity.”

This drive towards integration led Jarvie to begin creating what he now calls “houses of Dentsu” – hubs where media, creative and CXM are located together.

“If you're going to integrate as a philosophy, why not create these centres? We've consolidated in the big cities to what I lovingly refer to as houses of Dentsu. It's the 21st-century full-service comms business in one house, so in London, there's a ‘house of Dentsu’ that's got media creative and CXM in it, in Manchester and Edinburgh now, it's exactly the same.”

Almost like the Liberty of advertising? “You're talking to a Scotsman,” Jarvie, says. “I'm scared to go to Liberty’s, but maybe Debenhams or House of Fraser.”

“If you come into number 10 Triton Street [Dentsu’s London office] right now, the second floor is fully integrated Dentsumcgarrybowen, Isobar, John Brown and Gleam. These are our creative, our digital experience, our content and our social media talent businesses, and they share one floor.”

That said, Dentsu is not rushing the return to the office across the UK as the respective national governments have already delayed the end to social distancing restrictions. Jarvie has taken what he calls a “lag-not-lead” approach throughout the pandemic, waiting two weeks for each government or local authority decision to settle before it followed.

Individual agency teams have the responsibility to work out their own plans and rotas for returning to the office. It has also developed technology to allow the physical booking of space, which has enabled it to reduce floor space around the UK and Ireland, as part of its consolidation strategy.

Following this two-year process, Jarvie says the transformation and integration of Dentsu UK is 95% complete. The remaining 5% will become part of business-as-usual: the transformation of a business never really ends, he points out.

“You get to a place where you’ve transformed, but you need to have an agile business. The future of work is going to change and will lead into new technologies and working practices, which will probably mean we have to continue to transform.”

In an industry that “talks incessantly about integration”, Jarvie says, the core achievement for him is to make the business simpler, and make it 100% client-serving.

The idea is to consolidate expertise more effectively, making it easier for clients to navigate.

“There's a tighter operational chassis in each agency, which means much more of our organisational muscle, and time, is spent facing clients,” Jarvie says. He points out that client satisfaction scores (measured by TRR) are at the highest level they've ever been.

So far, clients have been receptive, he says, pointing to the November 2020 consolidation of American Express’ global creative account into Dentsumcgarrybowen across international markets including the UK, ending an almost 60-year relationship with Ogilvy.

Both moves came about because marketers could see the benefits of integrated business and the “stimulus, ideation and alchemy” that gets delivered as a result, Jarvie says.

Clients are not simply asking for a standalone media, brand, or CXM campaign any more, they want an agency partner with oversight of it all, he explains.

A lot of agency groups and holding companies wish to have the kind of “radical collaboration” already in place at Dentsu, Jarvie claims. “We're building a business that's got a genetic strand of bringing others to the party, trying to find the better solution.”

Paul Phillips, managing director of AAR, a consultancy which manages pitches for clients, says: “Dentsu UK is undoubtedly in the thick of a process of evolution but they are clear on their direction of travel. Where they are headed and their global ambition to be the most integrated network in the world is definitely what CMO’s want from their agencies, in thinking as well as execution.”

However, another industry observer says Dentsu still has work to do to articulate the role of its agency brands in an integrated network. This person pointed out the iProspect takeover of Vizeum was a fusion of two very different cultures (digital performance and media planning), Asian import Dentsu X is nascent and flagship media agency Carat has been without a CEO in the UK since December.

Clark has made serving clients a key focus (she likes to quote Procter & Gamble chief brand officer Marc Pritchard who warned agencies: “Your complexity should not be my problem”) and Dentsu UK has invested in senior integrated client leaders to service large accounts such as Jaguar Land Rover.

The biggest clients will have the benefit of a leader who can see their whole brand estate, all elements of consumer marketing, content creativity, engagement, acquisition, retention.

“What very senior clients are saying to us is, 'Just bring me people around my top table, who can focus on what I need them to do,'” Jarvie says. “None of the fiefdoms. You sometimes only get one invitation for that particular conversation [at C-suite level] and if you're not ready for it, the ship will have sailed.”

Over the transformation period, the group has also made a series of senior appointments, described by Jarvie as “leading practitioners of their art form in the UK”.

The UK and six other markets went through a big restructuring in December 2019 before the pandemic. In the past 18 months, headcount has fallen 3%, leaving the group with about 4,000 UK employees spread across the regions.

Most of the decrease is attributed by Jarvie to the relocation of roles outside London, with many finance and HR operations shifting to Manchester.

The group is now hiring again, the economy is rebounding (some clients have had their “best years ever”, Jarvie notes) and there is a talent shortage in several digital and CXM areas.

Dentsu UK has a greater geographical spread outside London than any of the other big six agency groups and the ambition is to become a “destination employer” in all of its UK locations.

“We're proud of our geographical diversification; that's where real people live,” he says. “And if you want to get real cut-through communications, you've got to understand the people you're talking to.

“There's enormous talent in a lot of places we’re in that perhaps haven't thought of careers in our industry, because there's nobody there. Well, we're there now. We're staying there. And we want to pull people in.”

The recovery in the ad market comes at a good time. Having spent a lot of time “internalising and solving our own problems”, Dentsu UK is ready to put itself back in the shop window.

“We want to be a head-turner. We want people to say: ‘What's going on over there?’ We’ve had to be quiet for a while, and that doesn't necessarily serve us particularly well, but we're starting to turn the corner,” Jarvie says.

The great return to the office experiment part II: Dentsu, MediaCom and more

How agencies, brands and media owners are dealing with the second lockdown