Creative director Paul Burke reflects on the decline in charity advertising he says has corresponded with a rise in purpose-led brand ads.

Once upon a time…

The advertising industry was cheerfully and transparently right wing. It still is, of course, but back then it didn’t try to pretend otherwise. Agencies took pride in their profits and those they made for their clients. They’d then assuage their wicked, capitalist consciences by doing great work for good causes. Most agencies had a charity account for which they’d work pro bono to raise awareness and raise money. And, in return, the charities provided the chance to create powerful and award-winning ads. Ads like these…. (below, clockwise from top left: RSPCA, Muscular Dystrophy Group, Barnardo's; main image, above, British Tinnitus Association) 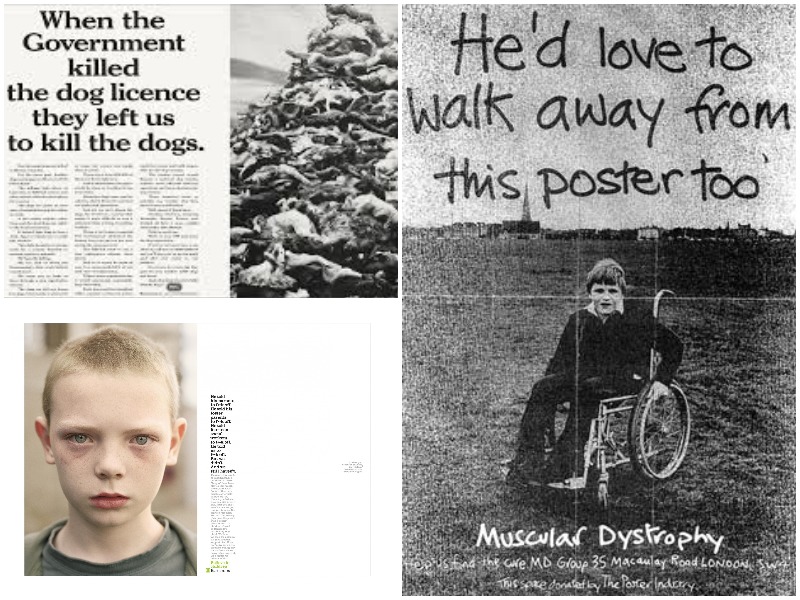 Not content with quietly supporting their chosen charities, certain big brands decided that they wanted to be charities – well, faux charities – and began solemnly declaring their “social purpose”. Even worse, they wanted everyone to know about it.

In its rush to be holier than thou, more socially aware than thou and, let’s be honest, more profitable than thou, the advertising industry seems to have neglected the small charities that relied on it for help.

Not only have those charities been starved of good advertising but  their donations were decimated when Covid shuttered their shops. This sorry situation has been compounded by an increasing suspicion that some brands aren’t quite as virtuous as they seem. For example... 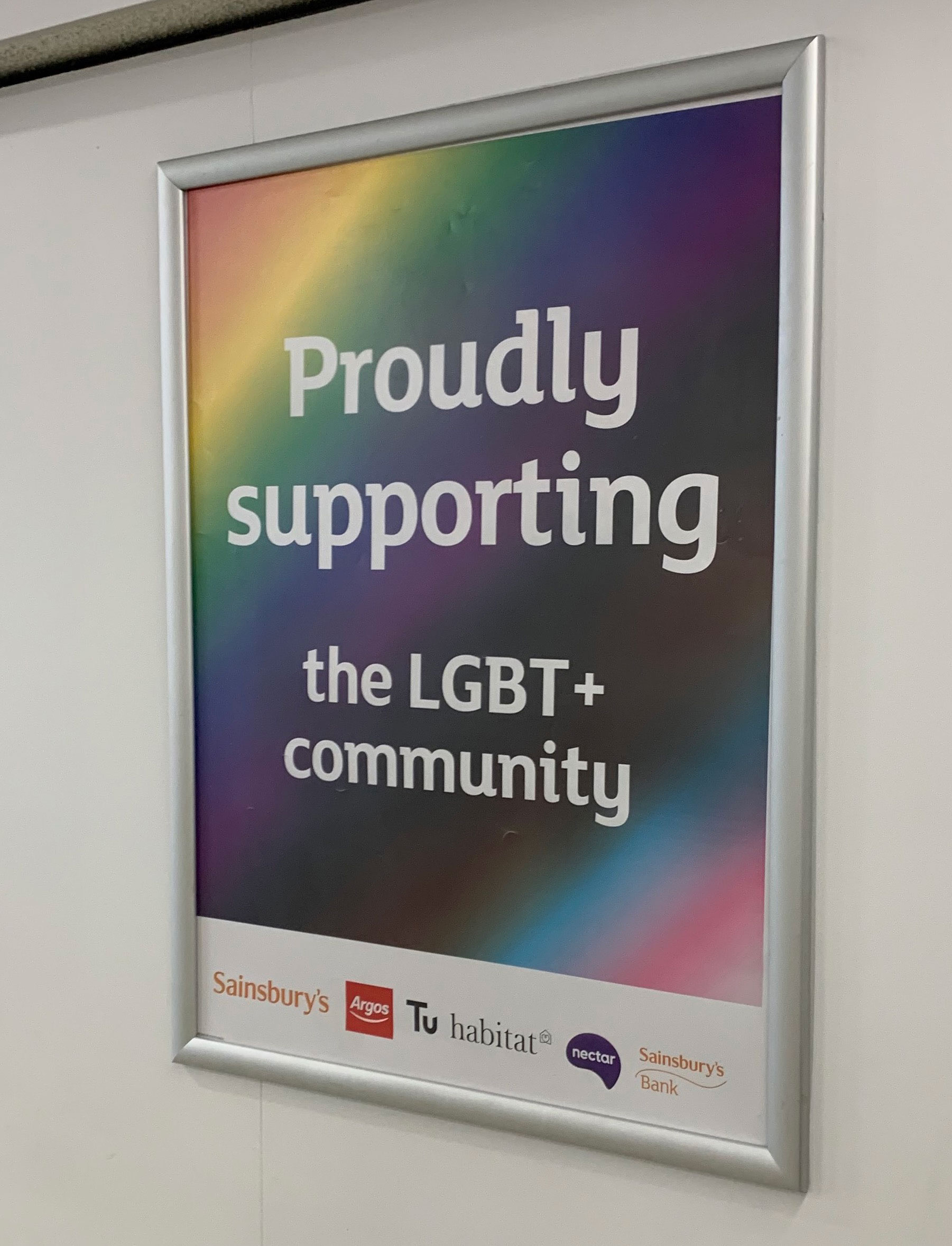 No-one loves Sainsbury’s more than I do.

So I was delighted to see this poster (right) by the tills.

I was referred to its press office and this is what they said: “We’ll have an inclusive workforce that offers employment opportunities to all members of the community.”

Since ensuring equality of opportunity is a legal obligation for all employers, they were clearly expecting a round of applause for doing something they’re obliged to do anyway. But more troublingly, that poster suggests that this is a new policy for Sainsbury’s and that it wasn't always quite so supportive. Otherwise, why even mention it?

Heroic LGBT+ campaigner Peter Tatchell hinted at the answer when he expressed his dismay at brands who try to co-opt Pride for profit. "It's very damaging,” he said. “Many of us now feel exploited."

A little while back, you could find these peculiar wordless bars of Cadbury’s Dairy Milk (above). They were part of a rather convoluted campaign – something about Cadbury donating its words to help elderly people combat loneliness. All very laudable except for one thing: as Steve Harrison points out in a new version of his brilliant book Can’t Sell, Won’t Sell, this campaign was running at about the same time as Cadbury’s US bosses were being censured for paying just £271,000 in taxes in the UK on sales of £1.7bn. If they hadn’t cunningly reduced their tax bill like this, who knows what good their millions could have done? They might have gone towards funding social care which includes… you’re ahead of me, aren’t you… helping the elderly. 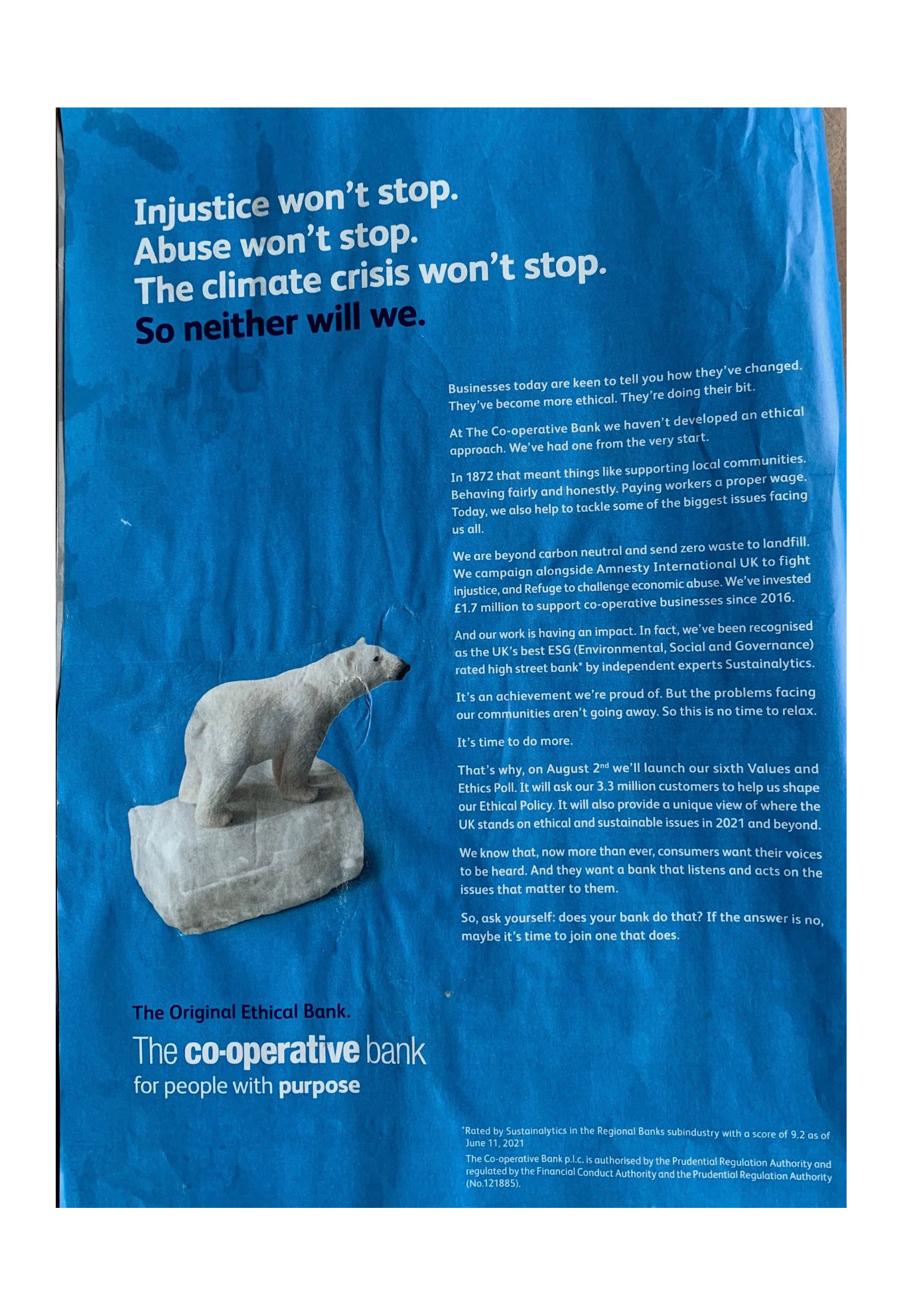 Never fear, the Co-op is here!

We’ve always liked the Co-op, haven’t we? It's a bit hopeless but traditionally quite kind and communitarian, doing its bit to help local people. But oh God, what’s this?

Is the Co-op seriously suggesting that it is going to save the planet? This is beyond embarrassing, especially as it's gone for that time-honoured climate change cliché – the picture of the polar bear. Couldn’t it have been just a little more original? Then no-one would have thought that it was advertising a special offer on Fox’s Glacier Mints.

And that’s the whole problem with “social purpose” – right there in the headline of that Co-op ad. They’ve deliberately chosen huge, global issues, knowing full well that they can’t solve them. The headline even admits this. They’re right – injustice will never stop, abuse will never stop. Neither will discrimination or loneliness among the elderly. So when vainglorious brands fail to eradicate them, no-one can hold them accountable.

Smaller, more realistic ambitions aren’t quite so popular, are they? Because advertisers who commit to solving them might have to, well, solve them. That’s not to say the bigger challenges shouldn’t be tackled, of course, they should. But if you name any issue – medical, societal or environmental – there’ll be a proper charity run by people whose lives are dedicated to addressing it. And right now, these people need our help.

The return of charity

Wouldn’t it be great if brands stopped with the cynically confected “social purpose”? And even better, if their agencies stopped encouraging them. Instead, they could each find a small charity that actually does what they pretend to.

Clients and agencies could then collaborate to give those charities the support they need. The agencies could create some really powerful work for them and, without fuss or fanfare, their clients could help pay for it. Not tiny, skippable online ads but proper TV, radio and print ads that will make the public stop, think and donate. Big brands could do this discreetly or anonymously because virtue, rather than virtue signalling, is its own reward.

Advertisers could once again take pride in their profits and in what they’re able to do with them because they have the power to revive charity advertising. They just need to stand modestly aside and help raise millions for worthy and tangible causes.

Because isn’t that what “social purpose” actually means?

The great debate: are craft skills really declining in agencies?

Kind, decent and fun: a tribute to Dave Buchanan

This creative reckons account management is the most important department

The rock star delusion: what does it mean for creativity?