The world's most popular messaging app updated its terms of use and privacy policy one week ago (January 4). It alerted all users of the update in a pop-up notification that asked users to accept new terms in order to keep using the app beyond February 8. 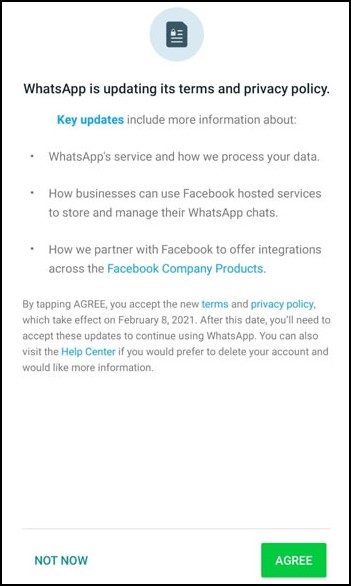 Of particular concern to users is the removal of a passage in the privacy policy that had allowed users to opt out of sharing WhatsApp account information, such as their phone number or location, with Facebook. Privacy activists were quick to condemn the mandatory transfer of data. Privacy International tweeted that the "accept our data grab or get out" approach is "pretty far from what consent should look like under laws like GDPR".

But in fact, the revision does not reflect a new data-sharing policy. WhatsApp has shared information on the majority of its users with Facebook since August 2016, when it rolled out a major update to its privacy policy. Only users that opted out of sharing data with Facebook at that time were exempt from the policy, and will continue to be. The window to opt out was closed after 30 days. Publisher Wired confirmed with WhatsApp that last week's privacy policy changes do not actually impact WhatsApp's existing practices or behaviour around sharing data with Facebook.

Nevertheless, in the wake of the policy update, several high-profile social-media users announced they were deleting WhatsApp and began guiding users to alternative messaging apps Signal and Telegram. Chamath Palihapitiya, the CEO of Social Capital and chairman of Virgin Galactic, tweeted:

Starting in Feb, WhatsApp will begin sharing all kinds of data with Facebook. They just killed their best feature - privacy.

Please no longer text me on WhatsApp. Download @signalapp

The most notable push came from Tesla CEO Elon Musk, whose account is in the top 50 most-followed Twittter handles with 41.9 million followers. The tweet, "Use Signal", was retweeted by Twitter CEO Jack Dorsey.

Look at what you've done. ???? pic.twitter.com/0YuqyZXtgP

Signal and Telegram have subsequently witnessed a spike in downloads. More than 100,000 users installed Signal across Apple and Google app stores last week, while Telegram was downloaded nearly 2.2 million times, according to Sensor Tower data. Meanwhile, WhatsApp installs fell by 11% in the first seven days of 2021 compared to the prior week, reaching 10.5 million downloads globally.

It appears as though Signal was not prepared for the sudden influx of new users: on Thursday (January 7) it said that verification codes used to create new accounts were delayed due to the spike in demand. "We are working with carriers to resolve this as quickly as possible. Hang in there," the service tweeted.