In its wide-ranging Open event, IPG Mediabrands explored the challenges still faced by the LGBT+ community in the industry, and celebrated the creative champions dedicated to solving them.

"People don’t think outside of their own experience. They think, because they don’t experience discrimination, that it must not be happening." The words of model and social activist Munroe Bergdorf were front of mind at IPG Mediabrands' Open event last week, which underlined the power of seeing the world through a lens other than your own in order to drive both better representation and business performance.

The research also revealed that the LGBT+ community is a much bigger percentage of the market than previously estimated. Presenting its UK by UM research, Michael Brown, head of insight at UM, said that while the ONS estimates that 2% of the population is lesbian, gay or bisexual, its research revealed that in fact 26% of the population does not identify as straight, equating to a market of over 14 million people.

Queerer than we used to be

UM’s research also shone a light on shifting attitudes to sexuality, which is often viewed as being on a scale, rather than binary. Some 84% of 18- to 24-year-olds view sexuality as a spectrum, while almost half (49%) of 18-to-25 year-olds don’t identify as 100% gay or straight.

Yet, despite this shift, the advertising industry, like many other businesses, may also suffer from the affliction of believing itself to be more progressive than it is. Research from Stonewall revealed that 60% of graduates go back into the closet when they enter the workplace, a statistic which makes a mockery of the current business narrative on the power of bringing your "whole self" to work. 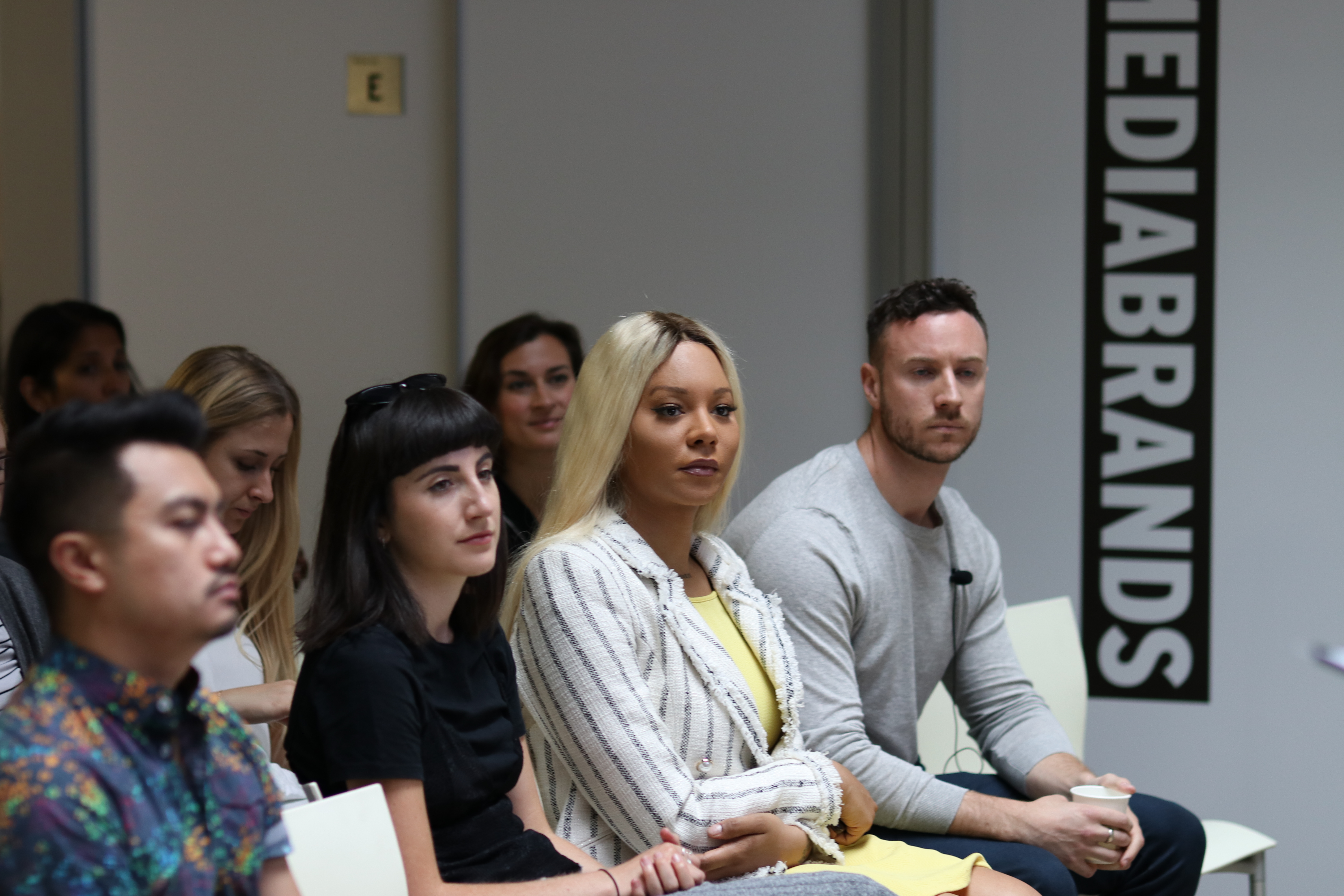 Inclusion riders and the end of mono-culture

The creative industries have huge power and responsibility to push for progress when it comes to both better representation and removing stigma from LGBT+ communities.

Munroe Bergdorf (pictured above, second from right) said that If any representation is to be truly authentic, there must be diversity in the consultants and behind the camera too, because truth comes from experience. She explains: "A homogenous group behind the camera trying to achieve something to grow their reach for a target audience isn’t going to be real. I do put my foot down if I walk on set and it’s just a white or just a straight cast."

So which brands are getting it right? According to Bergdorf, Rhianna’s Fenty is a brilliant example. "Other people’s cultures, other people’s stories can be an exciting thing that we should all want to experience. And that’s why businesses should want to hire for diversity too, it makes the workplace a much more interesting. Companies need to pay it forward, they can’t wait for people to come out. Everyone needs to know they have equal access to programmes and procedures that will support them," she added.

Daryl Lee, chief executive of UM, commented: "The time of the mono-culture is over and there really is no debating the power of diversity within a business. Diverse cultures help drive thinking, problem-solving and so-on. The question is: does your leader really embrace this? UM embraces the power of belonging, we want to be a family, one in which everyone can belong."

The best work always comes from a place of openness, not from fear, and the speakers at UM’s event urged the audience to not just give people a voice but stand behind them. Berdorf encouraged brands to "be brave and stop playing by the book". She explained: "If you want to do the best for any community, you need to take risks and do something new. If we’re just doing the same old things, we’re not going to get anywhere."

She also alluded to her own experience of being dumped as the face of a high-profile brand for being herself, saying: "I’ve lost a really high profile, really great job for using my own voice to speak about a particular issue. You need to give people a voice and stand behind them, you can’t just let their image do the talking."

Steve Lok, global head of martech at The Economist, urged the audience to keep challenging their own perceptions around whether they are doing enough. He added that "we cannot possibly be doing enough until things are absolutely equal".

UM’s Lee called on brands to work out their brand values, and if one of those is respect then to speak up. He added: "There’s a very timely debate around race in the US and it’s the media’s job to have a voice and stand up for what we believe in. On a personal level, always challenge prejudice, no matter where you find it – even if it’s a member of your own family."

Here are some key take-outs from the other speakers at the event: 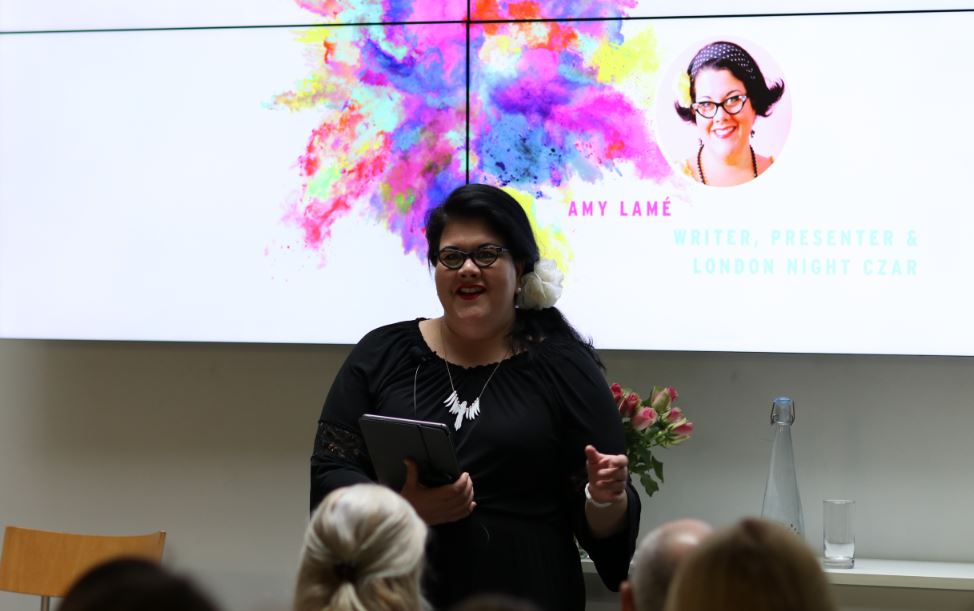 "Is Grindr killing off our clubs? Well is Tinder killing All Bar One?" asked Lamé, explaining the challenges of trying to stem the loss of LGBT+ venues and spaces in London. (London has lost more ethan half of its LGBT venues in a decade, according to data from UCL).

According to Lamé, people now ask do we need LGBT+ venues anymore? "Yes," she argued. "We need places where we can fully be ourselves. This is our culture, this is who we are. I came to London because I sought community here. It is not just about tolerance it is about celebrating."

She urged the audience to think carefully about intersectionality. "As we push forward we need to ensure that all women, including trans women, are included," she said.

Lamé added that you have a choice to make a difference in your respective fields, adding: "I encourage you all to feel empowered to make change. I cannot stress enough how important allies are. It is so tiring being the only lesbian in the room with our hands up." 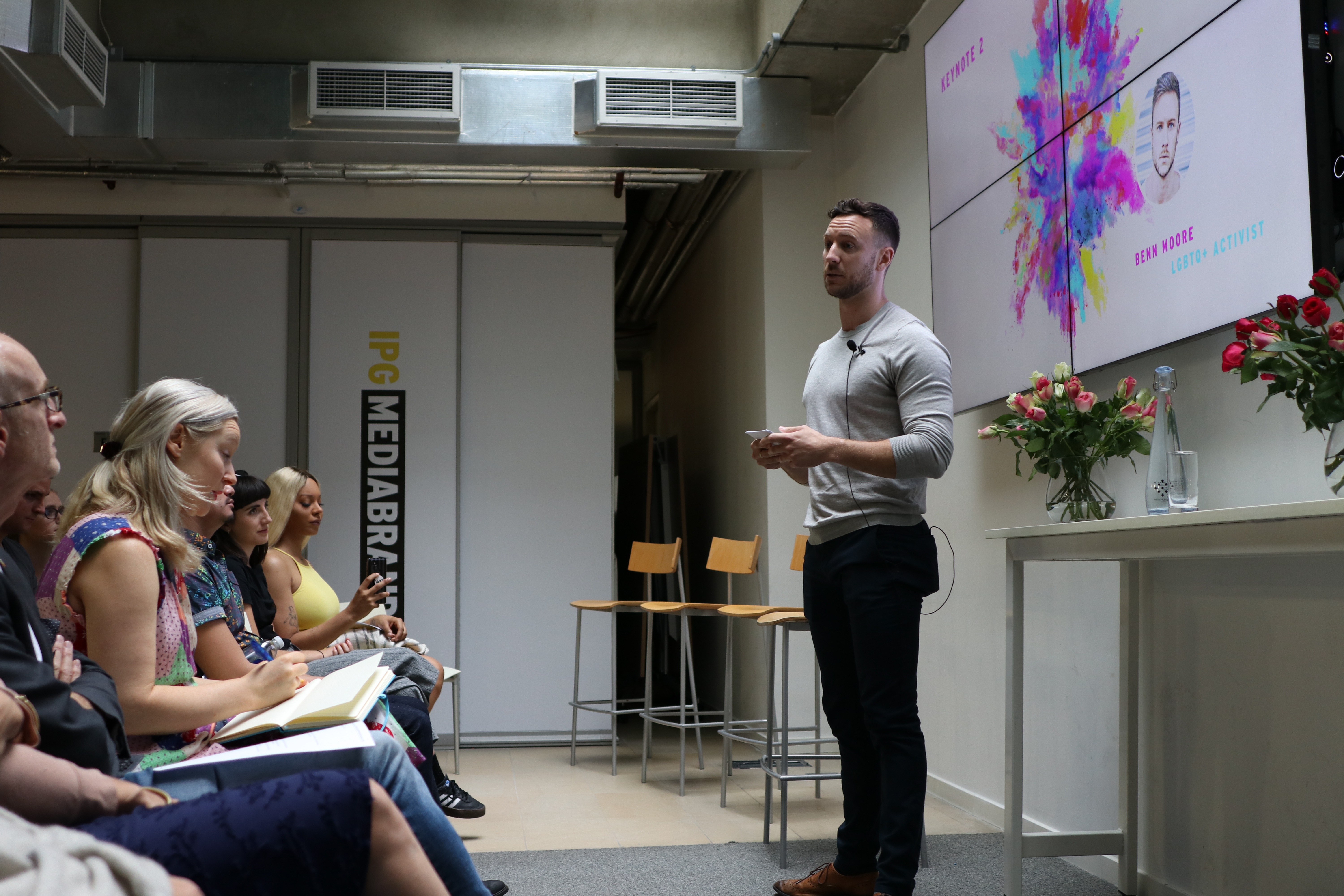 Moore "came out" courtesy of media coverage following a devastating attack which saw a bottle of bleach thrown in his face in Vauxhall in a homophobic attack.

"Tolerance is a word I have come to loathe," he explained in an impassioned speech which focused on the barriers marginalised groups still face in society. Moore, who believes that a more accepting society is crucial for progress, said: "Pride still matters, people still experience discrimination, we need to remind ourselves of how far we still have to go."

According to Moore, while there has been significant progress there remains a great deal of discrimination for specific groups. He pointed to research which shows that one in eight transgender employees in the UK have been attacked by a colleague or customer and four in five hate crimes go unreported.

Moore said there is a need for more allies in the community to tackle the issues facing the transgender community, adding: "We must make their fight our fight." 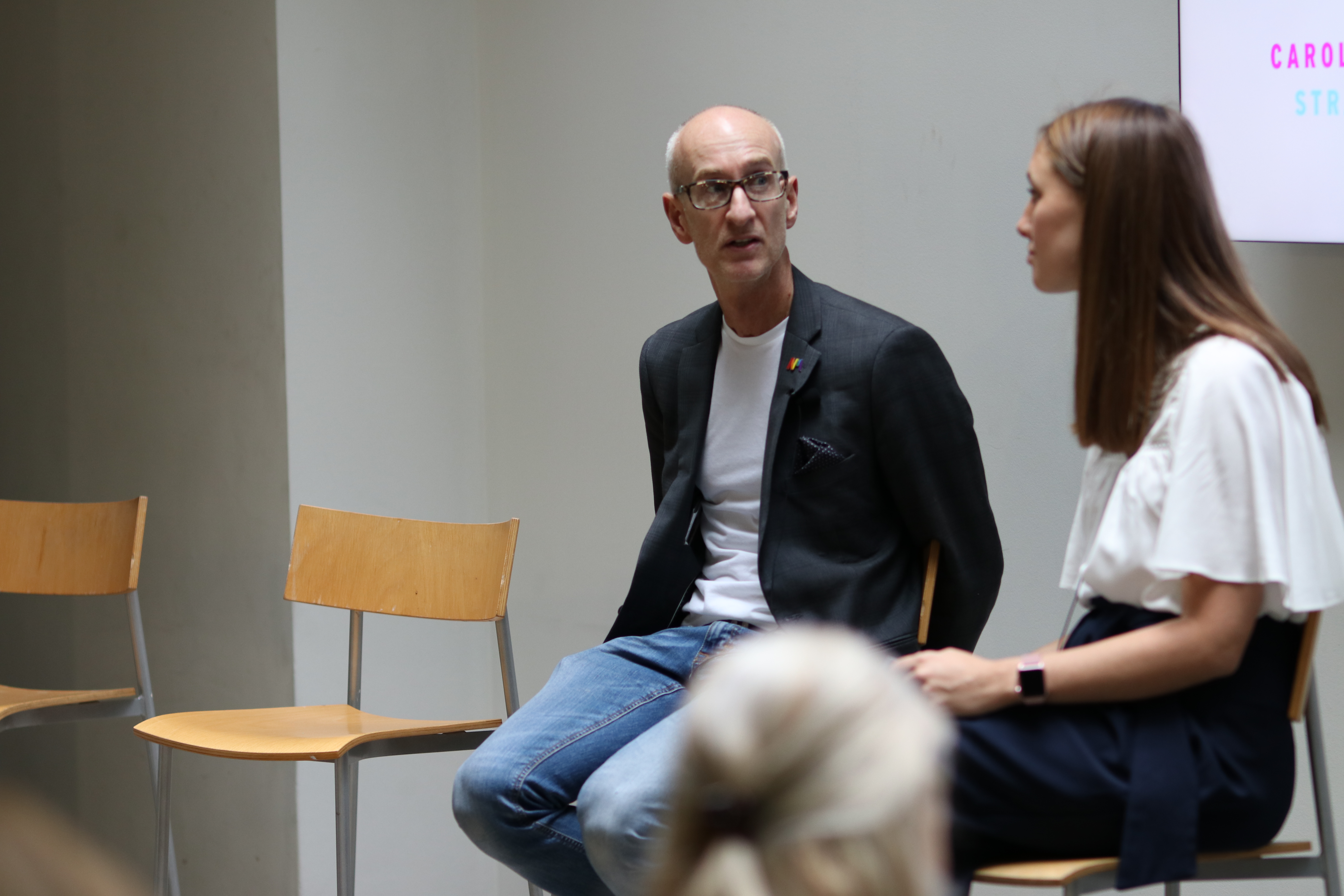 In an engaging and thought-provoking conversation with Caroline Manning, strategy director at Initiative, Mark Runacus shone a light on the disconnect between rhetoric and reality when it comes to bringing your "whole self" to the workplace.

Pointing to Stonewall’s research which shows that 60% of employees go back into the closet when they enter the workforce, Runacus shared the fact that he did not come out until his 30s, when he worked at Ogilvy.

Highlighting the power of an open culture he shared the story of how David Ogilvy had said he wanted to hire "more gays, Jews and women because no one else would" when building the agency. Ogilvy also had a "red carpet" philosophy, which in essence meant when employees travelled abroad they could look up colleagues in the internal phone book and stay with them; a phone book which also highlighted the fact that their were male and female leaders across the agency with same sex partners.

Sharing his experience of reading the book, he said: "It made me think, its OK to be gay at Ogilvy."

He urged the industry to focus on increasing visibility, particularly when it comes to the continued invisibility of lesbians. He added that a lot of education still needed to do when it comes to the language. "We are part of the fabric of our society so when you have the appropriate opportunity its important to properly represent the LGBT+ community," he added.

To the brands that are actively seeking to increase their representation of the LGBT+ community Runacus said the first question to ask is is your organisation already a diverse and inclusive space? For, while there is "no rulebook" starting with internal communities is vital.

Runacus added that he was excited about the future, with almost half of 18 to 25 year-olds not identifying as either 100% straight or 100% gay all the binary advertising surrounding advertising needs to go. "Brands need to ask, how are you adapting to that? We can’t still be talking about ABC1 men." 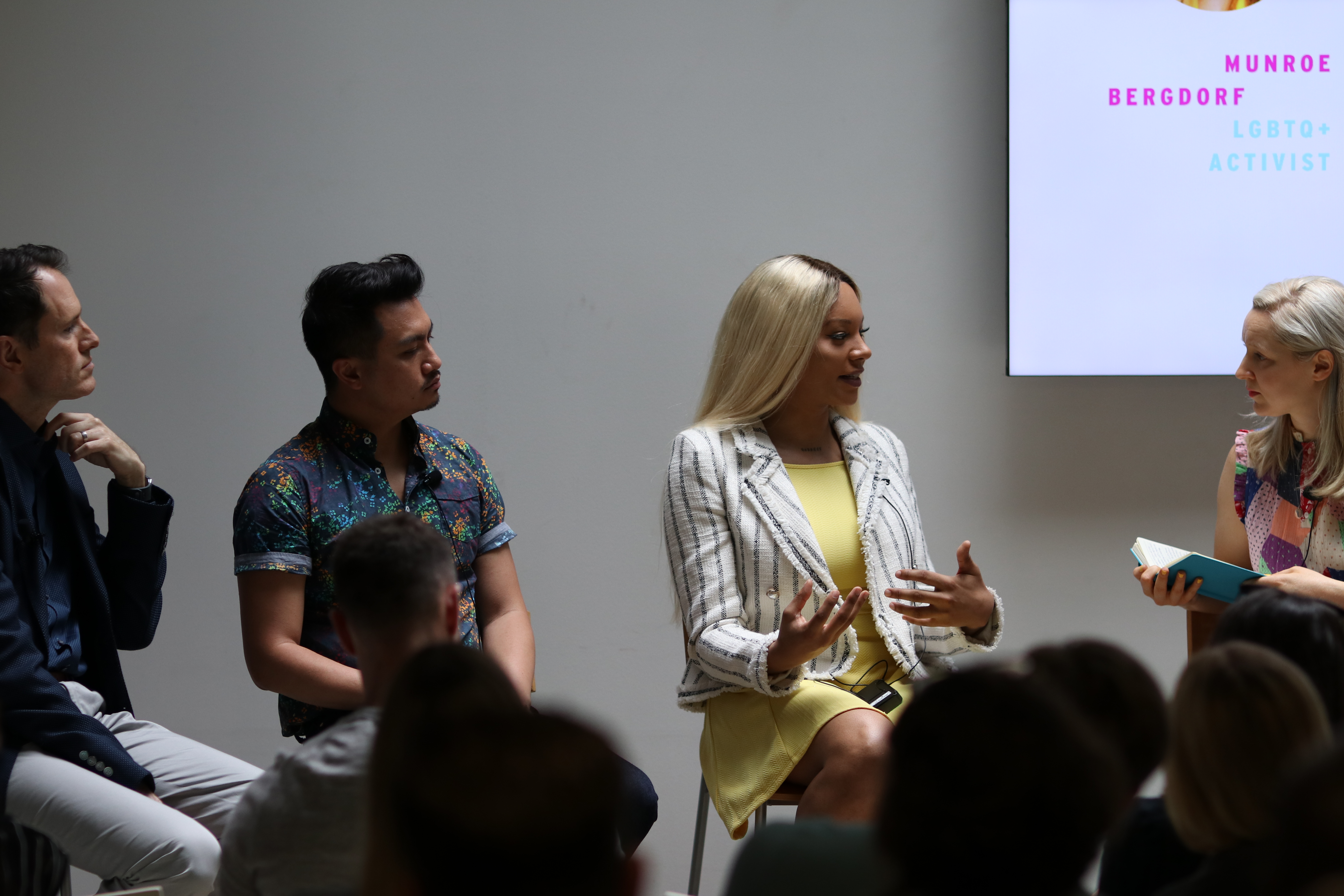 Action points for the industry

1. Increase Visibility: Marketing that is progressive in its representation of LGBT+ people will resonate amongst a broader base than previously imagined.

2. Remove Stigma: While LGBT+ perceptions in society are generally improving, there is much remaining stigma.

3. Representation and the media matters: Advertising has an important role and responsibility in challenging conventions and defining what is "normal".

54% agree: I might have come out sooner if brands had shown LGBT+ people like me when I was growing up

52% agree: The LGBT+ community is "invisible" in advertising

60% of lesbian and bisexual women in the UK believe there’s less visibility of them in the public eye compared to gay and bisexual men.

60% of trans people have attempted suicide

What should the ad industry be doing better to retain older talent?

Creativity from the care system

Celebrate difference: 'the time for getting it right is now'