Good question. The short answer is: me, Dave Dye, creative partner at Love or Fear, founded a few Tuesdays ago. But that won't fill a whole article, so here's the long answer.

Where are we now?

The life expectancy of a marketing director is now just 18 months. In that time, they’re often given a product to sell, with little or no differentiation, in an overcrowded marketplace and with one hand tied behind their back, due to short-term ROI accountability.

Then there are ad agencies.

Boy, the swaggering, confident agencies I grew up with are now smaller, confused and anxious.

It’s no wonder: fees have been slashed, projects are replacing retainers and anyone with a laptop is eating their lunch.

How did we get here?

Over the past decade or so, first-class ad agencies turned themselves into third-rate tech companies.

Throwing away the one thing they did better than anyone – talking to the public.

No-one could compete with ad agencies when it came to turning screeds of cold data and goals into bite-sized, attention-grabbing, fame-inducing bits of communication.

Inside the ad agencies, sitting in offices (like a room, but at work), were the communicators. They were expensive, opinionated and stubborn but they just seemed to have a feel for knowing what would cut through and resonate with the public.

Sadly, many of those thinkers were replaced with makers.

Agencies had no choice, the world was changing, the future was digital and, perhaps most importantly, they were being called names by the new cool kids, such as "traditional" and "dinosaur", and told that they couldn’t go on.

With a few notable exceptions, they brought in people who were better at making things with pixels than marketing things to people.

I don’t say that to be mean, it’s just fact. The truly world-class digital folk sat in tech companies in California, not ad agencies in Soho. (Financially, ad agencies couldn’t compete with the likes of Google, Facebook and Apple.)

Initially, it was fine.

Agencies lost that upsetting "traditional" tag and got paid very well because few clients truly understood this new digital world, they just knew they needed it.

Digital was no longer an enigma, it was a commodity – one that, seemingly, every man and his dog was now offering.

The digital dollar was downgraded to 10c.

They had to cut their cloth accordingly, and, as the saying goes, "an agency’s assets walk out the door every night", so the cloth they cut was people.

So out went the six-figure crowd.

The problem was agencies weren’t stupid, they paid big salaries only to those who were more experienced, knowledgeable or talented than the others.

The very reasons clients hire agencies in the first place.

In an effort to replace that lost income, agencies diversified.

Now they were offering in-house design, editing, film-making and all manner of services that they weren’t very good at.

Now, the last thing they could afford was for a client to take their tiny fees elsewhere, so they tried really hard not to be argumentative or annoying. It turned out that marketing directors didn’t want inexperienced jacks of all trades without beliefs.

For example, we’re not as disciplined at distilling as we used to be.

It meant less of those difficult conversations with clients about which message. Now, we could accommodate them all.

The problem is, start loosening up on Project A, and it’s a bit harder to be tighter on Project B.

Is it the end of the world to have a few extra scenes here or a couple of extra words there? No.

Does it make for less-effective advertising? Yes.

The common belief used to be that the public aren’t interested in our ads, so we had to be concise, relevant and interesting to have a chance of engaging them.

Now, many believe that the public want more engagement with brands and their marketing, regardless of how dull or irrelevant the message may be.

Cornish pasty brands now roll out videos about their purpose in society, beer bods produce 20-minute virtual brewery tours to make the pale ale process totally transparent, and apps are launched allowing you to envisage yourself holding a bottle of their ointment.

People don’t give a shit.

The Great British Bake Off is on; Tarantino has a new film out; they have families and friends; they want to be at the pub, shopping or, well, anywhere other than watching your beer being brewed. (Yes, there may well be a few geeks who want to watch your pale ale being brewed, but they already buy it.)

I would imagine. I wasn’t there, I’m not that old.

Back in the 1950s, advertising was all process, pseudo-science and bullshit.

Agencies had their secret sauces and unique formulas that could force the public to drop everything and buy your product.

They led to lifestyle ads, featuring models smiling while holding/driving/drinking/using the product.

Attached was a set of words and phrases that had never come out of the mouths of any human being. Ever.

Marketing today is filled with the attractive grandchildren of those models, smiling or laughing their head off because they are holding up the products next to other smilers and laughers.

And words? "Find your happy" and "Flavour me backwards", surely created by Bowie back in Berlin, using his cut-up technique? Or maybe it’s bots? Young, bearded ones with a taste for pale ale. (From a microbrewery, obvs.) 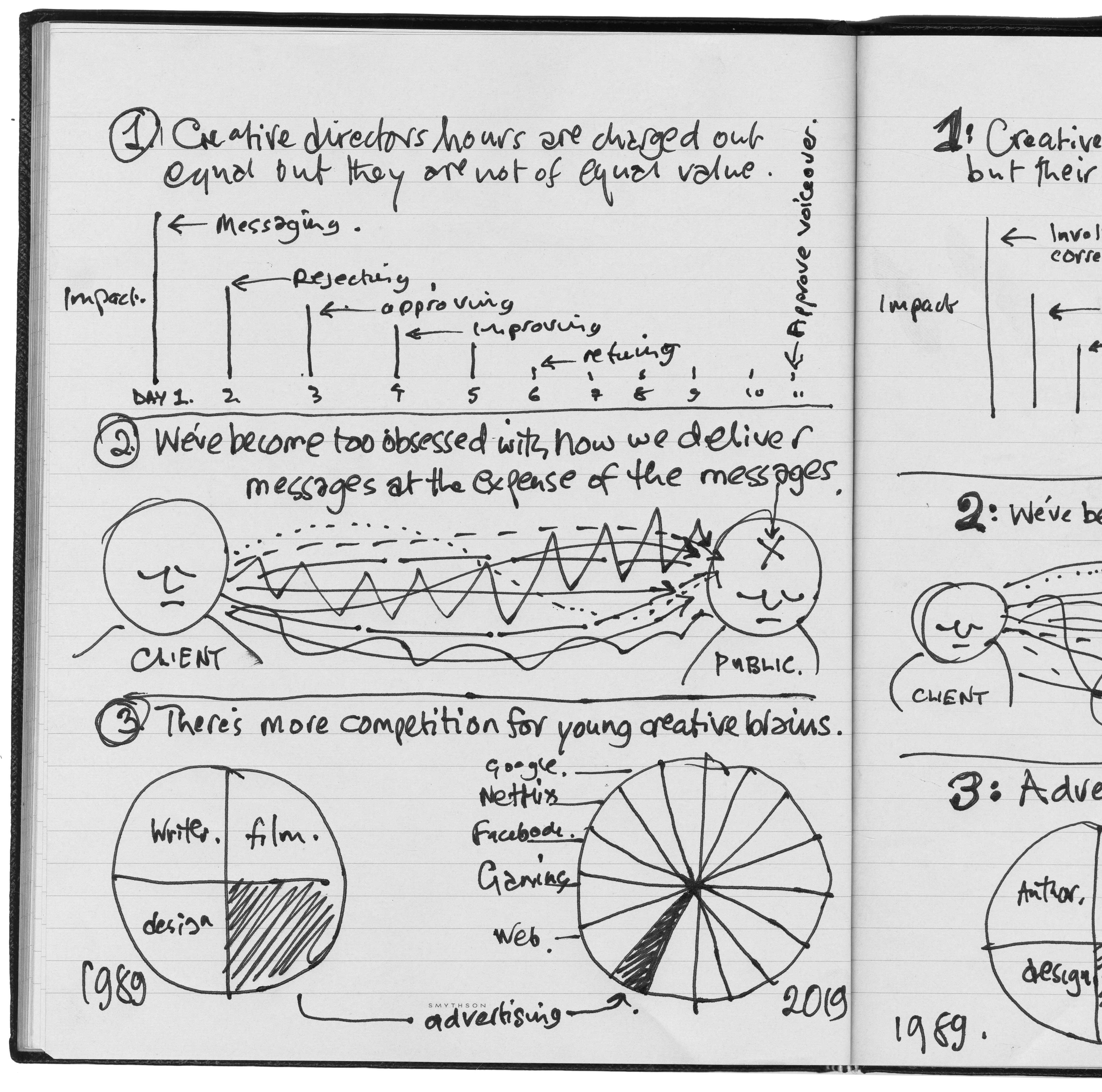 Fortunately, the 1960s turned up

People they knew: friends, family and colleagues, not segments, slices or blocks.

So, they didn’t bullshit them, they were honest.

Rather than showing someone with a smile, they tried to make the viewer smile.

Suddenly, those super-scientific, multinational agencies with their patented systems for selling looked like they were from the Ice Age.

Science was replaced by humanity.

Don’t get me wrong, there are some fantastic agencies and people around today, but very few.

At some point, a new generation of punks will call bullshit on the output of our business, they’ll make its creators feel like Emerson, Lake & Palmer when The Damned, Pistols and Clash turned up.

They’ll create visceral, entertaining work that gets noticed, they’ll talk to the public like they talk to their friends – honestly and respectfully. (And, they’ll want to get famous for making
brands famous.)

After a decade of cuts, there are signs that clients may be changing; many are now placing value over savings.

Maybe as an industry we also need to place value above cost.

Particularly in creative, it’s hard to charge by the yard. How long do you take to have an insight, observation or idea? Exactly.

What's that got to do with me?

There’s a saying in the City: "What’s scarce is valuable."

In advertising today, emotion and experience are scarce.

(Tech and youth? Not so much.)

Love or Fear references the two emotions most likely to trigger an action.

We aim to create marketing that makes the people on the other end of it feel something.

Our industry has always undervalued experience. I guess it sounds so bleedin’ dull, doesn’t it?

There’s no market for "fresh" plumbers.

If you’ve been solving them for a couple of decades, whatever the industry, you get to really understand your tools, you pick up a lot of tips and shortcuts from previous bosses and colleagues, and you get quick, because you learn what not to do.

I teach at SCA 2.0 and I’m in touch with ad colleges all over the world. They use my blog (davedye.com) as a resource, so I’m well aware of the energy, idiosyncrasy and creativity that is pumped into our business every year like a vitamin B shot.

But, as with a good football team, a blend of youth and experience is most effective.

We will rent the most experienced brains for days, not just own the most inexpensive ones all year.

It’s gonna change, and change, when it turns up, usually swings to the polar opposite, from black to white, day to night, Obama to Trump.

It’s exciting but then I would say that. I’m the kind of crazy, cock-eyed optimist who’d start an agency five minutes before Brexit.

What do you expect?

Google ramps up ecommerce offering with shopping ads on YouTube

Climate activism has forced the ad industry to debate its purpose