The freelance economy is here to stay. Brand Republic talks to freelancers and digital creative teams about what they get out of this new way of working.

This year, like the past few years, is the year of the freelancer… in the same way that it’s the year of mobile. You might interpret that to mean that each trend never peaked as predicted, or perhaps it’s that each trend is becoming increasingly important with each passing year.

It’s been tempting to write off the growth of the self-employed as a by-product of the recession. While it’s fair to say that self-employment at the bottom end of the labour market has had a significant impact on the figures (the Royal Society of Arts has even suggested that the ranks of the self-employed will outgrow the public sector workforce by 2018), there’s a growing consensus that this isn’t only about zero-hour contracts.

The Future Working report by the European Forum of Independent Professionals and the UK’s member body PCG (now IPSE) looked at the growth of independent professionals ("highly skilled self-employed individuals who work for themselves but do not employ others") in Europe.

The IPA’s Client-Agency Relationship report found that 45.8% of the 90 agency chiefs surveyed said 11% to 25% of their overall offering was new compared to two years ago, and a clear majority believed diversification had enhanced client retention.

It’s a trend that the Bank of England Monetary Policy Committee recognised last year, noting "part of the rise in self-employment appeared to be a continuation of a longer-term secular trend, rather than a cyclical response to a lack of other employment opportunities".

And this long-term trend is having an outsize influence on the creative and digital industries. The UK Commission for Employment and Skills' (UKCES) Future of Work report pointed to this sector as one that can expect workers to be increasingly "self-employed or employed under project based contracts".

Freelance members-only marketplace YunoJuno has seen this trend first hand since mid 2012, with month-on-month growth in freelancer applications (15%), employer registrations (26%) and the average number of briefs posted by each employer (22%).

So what’s going on? Why are so many skilled workers going it alone and why are so many creative businesses in need of their services?

What’s in it for freelancers?

Well, there are a lot of reasons. Often chief among them is the opportunity for career development, new experiences and creative stimulation.

When anyone enters the job market, their professional brand is often informed by the brands they’ve worked for. Mika Tasich, a creative technologist and technical director who’s been freelancing for five years, now has brands such as Jaguar and Google in his portfolio.

For motion graphic designer Leon Nikoosimaitak (pictured, right), working with a broad range of clients has helped him to develop professionally.

"Having a broad perspective of many agencies provides me with a different outlook", he says. And it’s been exciting, too. "Flying abroad to do jobs and meeting new and inspiring people, I sometimes feel like the James Bond of the design world."

It also helps that freelancers tend to be brought in to do the cool stuff. As the Brighton Fuse 2 report notes, "firms often hire freelancers to do their most creative tasks". The Institute of Practitioners in Advertising’s (IPA) 2014 Agency Census backs this up, revealing that creative roles account for 41.8% of freelance jobs for member agencies.

There can also be a satisfying refocusing of a freelancer’s effort on one project and one project only. Tasich spent 15 years as a senior employee, but found he was always concentrating on crisis points – the one of up to 20 projects that was going badly.

Tasich explains that working on one project "allows you to dedicate all your energies so you get the good, bad and the ugly. When you are in a senior, permanent position you tend to get more bad than good".

Then there’s the chance to prioritise side projects, as Tasich does. "I always have a couple of my own little projects on the back burner, like building an app and putting it through an app store", he explains. "Being a freelancer gives me that freedom to be able to do something like that."

Perhaps one of the most satisfying parts of becoming an established freelancer is choosing the projects that appeal to you. Both Nikoosimaitak and Tasich have turned down work for ethical reasons.

At the beginning of the invasion of Iraq in 2003, Tasich turned down work with an agency who had been commissioned by a private security contractor. Saying no because of his beliefs "was an extremely liberating experience", he says.

And then of course, there’s the flexibility to take time off and the increased income to do something you love with that spare time. It was the impetus for product and project manager Serena Alboni to make the move to freelance at the start of 2015 after seeing her colleagues making the switch. For them it meant "more time and more money so it’s like, okay, let’s give it a try", she says.

So there you have it. Freelancing is a way to develop your career, become a jet-setting James Bond type, work on the coolest projects as well as side projects, which will be sold to a tech behemoth for seven figures, make a ton of money and have the time to enjoy this new wealth.

All three freelancers also confirmed* that the sun always shines on them, traffic lights automatically turn green in their presence and their sh#t no longer stinks. (*Okay, none of them said this.)

Let’s start with the money. In his pre-freelance days as a technical director, Tasich commissioned freelancers on rates that were obviously more than his salary. But he now admits "it was rather naive of me to assume that my income was going to greatly improve" as earnings tend to balance out over time.

Part of work not coming in consistently is, at least to begin with, the fear of where the next job is coming from.

"I have an annual panic straight after Christmas", Nikoosimaitak explains, "but it's not long before I have a contract. More often than not I get contacted by an agency before I have to look".

Although it’s not like income security is a given in the creative industries. Alboni, who had previously worked in the world of start-ups, doesn’t see permanent roles offering more stability. "Ultimately there’s no security in the permanent job world anyways", she says. "Based on my experience if a company needs to shut down it shuts down and you’re going home."

So it’s not all peaches and cream, and freelancing as an independent professional isn’t a good option for all. All three freelancers recognized that a stint in employment first was essential to build technical and soft skills, confidence, and a network of contacts. But once a specialism is established, the reasons to go freelance are compelling.

So is the deck stacked against employers? Well, yes. Brand Republic spoke with Alex Matthews, head of creative technology and partner at BBH London, and Mark Perry, multimedia operations director at Macmillan Education. Both agreed the balance of power is with freelancers.

"There’s so much work out there", Perry says, "[freelancers] can be selective if they’re good at what they do".

Matthews agrees, "you get the feeling that agencies are all sat there on YunoJuno circling over the two great developers that have just come up in the search results and the first one to swoop wins".

So bad luck, employers. You’ve lost your most important assets and will be held ransom by rich, jet-setting specialists. Or will they?

What’s in it for the employers?

There are a couple of new realities in the industry that are driving agencies into the loving arms of freelancers.

One is a change in the behaviour of clients. BBH’s Matthews explains that his work is moving from a retainer to a project-based model, so the ebb and flow of work is harder to predict.

That’s why "using something that’s a flexible resource makes a lot of sense", he says.

Another is the diversification of services agencies offer. The IPA’s Client-Agency Relationship report from this March found that close to half of the 90 agency chiefs surveyed said that 11% to 25% of their overall offering was new compared to two years ago, and "88% of the total sample also believe that diversification has enhanced client retention". 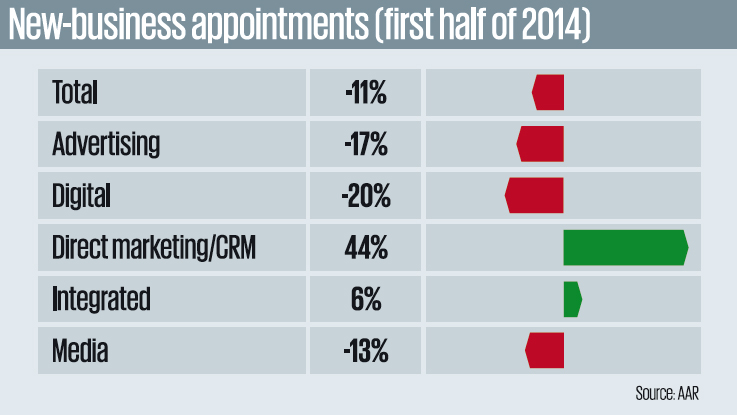 The report went on to detail how agencies fulfil these new services in four areas with freelancing featuring heavily in all of them, especially in the "apps – digital platforms" category.

When developing a new offering, freelancers can also lower the risk of a company over committing on costs. Perry says MacMillian has found that freelancers can be invaluable when innovating. "There are certain things they’re still researching", he says, "so they don't want to commit heads in the longer term. Those roles use freelancers".

There may also be specialized skills where it rarely makes sense to have someone on staff. Writing for the IPA’s blog, Leo Rayman, head of planning at Grey London, made the case that agencies will still be needed in the future:

As the world of marketing technology grows and specialises, client organisations are going to need the occasional help of specialists. Not every brand can justify a permanent Head of Oculus Rift.

Similarly, can every agency justify a permanent head of Oculus Rift? That’s a scenario where a freelancer with that specialism becomes invaluable.

Forming a team around a project can also help with creative strategy, as freelancer Tasich has found.

Tasich has positioned himself as a "mini-agency", someone who can bring in the right freelancers for any given project. He always cautions clients against necessarily applying the technology where they already have expertise, "Technology is a solution to the problem, and if you try to position technology before you know what the problem is, the technology will become a problem".

So the drivers of freelancers forming an important part of modern agencies are clear, but do they cost the earth?

As Tasich found, at first glance freelancer rates can be eye watering, but a 2012 report by PCG (now IPSE, remember?) on Freeing up Growth compared the permanent versus freelance costs for a communications director, and found that the freelance option was £1,000 cheaper.

Their estimates and assumptions could be questioned (they are a member body for freelancers, after all) but their numbers match Tasich’s experience.

So is everyone happy? As Matthews and Perry noted, the supply of highly skilled freelancers is outstripping demand at the moment.

However the UKCES Future of Work report posits that new technology will "increase competition between UK workers and others as the nature of many tasks allows international workers to compete for contracts", so supply problems may ease, although we found the stereotype of the freelancer working remotely (ie taking up space and bandwidth in a coffee shop all day every day) didn’t ring true. Both sides prefer to work together in the same space.

While agencies are deriving economic and strategic advantages from the skills in the freelance market, Shib Mathew, CEO of YunoJuno, can’t see this trend abating any time soon. "The global shift towards producing work via a freelance model has not only delivered economic and strategic gains for our industry," says Mathew, "it has also built an incredible eco-system driven by the opportunity to create innovative, truly responsive work".

What brands should know about the changing face of social capital