A move away from its organic heritage could have a negative effect on the Green & Black's brand, according to the 101 London founding partner.

Mondelez’ recent decision to launch a non-Fairtrade, non-organic version of Green & Black’s – until then, everyone’s favourite, er, Fairtrade, organic chocolate range - may have confounded its fans and cheered its competitors but it’s not without precedent.

It is not the first consumer packaged goods giant to commit brand hari kari and nor will it be the last: reduced cost of goods can be banked immediately; diminished brand equity is a problem that can be left for future generations to deal with.

But Green & Black’s, it seems to me, is now considerably less green and less black as a result, even allowing for my bias as someone who, in 2004, led the advertising thinking at a previous inflection point for the brand.

Back then, Green & Black’s was still a little hairshirt for most people’s tastes.  A proudly pioneering organic chocolate bar that happened to taste great if you could a) find it and b) overcome your various prejudices.  (Organic meant "chocolate minus" in those days, and the brand still wore what some described as "hippy" clothes.)  But Green & Black’s deserved a wider audience and - as is often the case but typically goes unreported – a delicate repositioning did the trick. 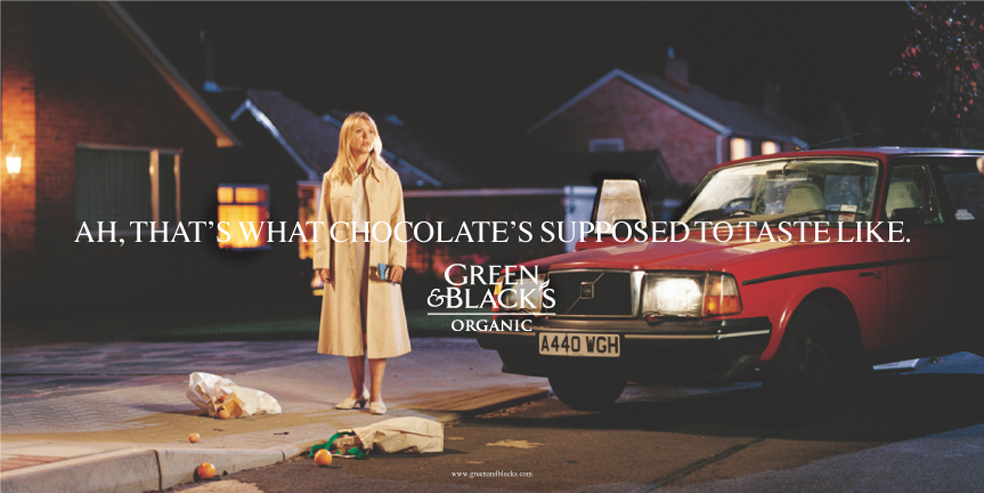 Those brilliant brand guardians Pearlfisher nailed a look and feel that has served the brand exceptionally well over the years.  Our advertising contribution - deliberately filmic print work capturing people’s first taste, shot somewhat improbably by commercials director Ringan Ledwidge - was similarly iconic, if less long-lasting.  In part, because our unapologetic selling line "So that’s how chocolate’s supposed to taste" (see above) hardly endeared the brand to its new owners, Cadbury.

So for all the hullabaloo attached to Mondelez’ apparent desertion of Fairtrade, it’s the non-organic play that I find most mystifying

Throughout Green & Black’s long journey from Portobello Road market stall, and despite its various changes of ownership along the way, "organic" - reinterpreted to denote taste superiority as well as ethical - has always been at the core of the brand.  It’s what makes it green (good for the planet) and it’s what makes it black (good for your taste buds).  So for all the hullabaloo attached to Mondelez’ apparent desertion of Fairtrade, it’s the non-organic play that I find most mystifying.

I shouldn’t be surprised, of course.  When brand meets (cocoa) bean-counters, brand often loses… despite being the source of tomorrow’s beans.

My formative advertising experience as a trainee planner at Abbott Mead Vickers BBDO should have inured me to just this phenomenon. The first research I ever conducted and the first creative brief I ever wrote (the two hadn’t been de-coupled back then; indeed were positively encouraged) was for Rolling Rock beer.  Half a century old and only ever brewed in the "glass-lined tanks of Old Latrobe" in Pennsylvania.

In a world of what were then called "badge beers" (the first wave of fancy bottled beers from overseas), we figured Rolling Rock could be a winningly authentic, blue collar challenger: Budweiser minus the nonsense.  Robert Campbell and Mark Roalfe (soon to launch Rainey Kelly Campbell Roalfe) crafted some wonderful lines and raided the US photography archives respectively for a campaign that debuted in The Independent’s new, proudly serious Saturday magazine.  Job done.

From Old Latrobe to Sunderland

Until, that is, the decision was taken by the then brand-owners to switch brewing from the glass-lined tanks of Old Latrobe… to the Vaux brewery in Sunderland.  At once improving margins, yes, but immediately imperilling our advertising and - much more importantly - ripping truth and romance from a brand in its infancy.

Fast forward twenty years and the big brewers are reaping what they’ve sown: obliged to fund generic campaigns for beer (read that again and reflect: how did we get to a place where beer needed advertising?) and acquiring the craft beers we have all flocked to because the big brands are so dispiriting.

In the short term, you see, the bean counters win.  Because brands can always take a haircut: a little trim here, a little trim there.  But in the long run they lose, because a brand is not just something to be nurtured as a source of ongoing competitive advantage but a promise… and we tend to punish folk who don’t keep them. Green & Black’s beware.

Green & Black's offers taxi rides in exchange for a selfie

Cadbury's new campaign is a bit bleak, but promises to go places

Behind the scenes on VCCP's new Cadbury campaign

Honing his craft: what ex-Starbucks and Virgin Active marketer Waring did next