This isn't the story you think it is.

One of the minor cruelties of the first lockdown for me was that last January I had finally got myself into a solid gym routine – one I maintained until mid-March, when suddenly it was bye bye to my nascent muscle tone and stamina. For more than three months I did no exercise more energetic than walking and, it won’t surprise you to hear, felt terrible. I didn’t have a bike. And so gradually, the dreadful realisation dawned on me: I was going to have to start running.

In order to make the bait-and-switch on which this article rests work effectively, it’s necessary to take you through the build-up to the motivational tale of overcoming adversity that the headline promises.

I’d known about Couch to 5K for years, but had never given it a try for complex reasons. It was partly that I’d convinced myself I hated running, and what was the point in getting better at it when there were other things I preferred to do? But I suspect there was also an element of shame; my terrible level of fitness meant I couldn’t previously run anything like 5k, and it was easier to make it a choice to reject the whole enterprise than to accept I needed to start with baby steps – even though I quite obviously did, as demonstrated by the fact I almost keeled over in the street after the first session.

The Couch to 5K programme, which involves completing three progressively more difficult sessions of running a week over nine weeks, was created in the 1990s by Josh Clark and has been endorsed by the NHS since 2012. It was offered first as a series of podcasts – recordings in which a voice of a “trainer” tells the user when to start and stop running, and provides motivational boosts. Since 2016, these have been available in an app, which has been developed by agencies including Vidatec (formerly Dogfish, based in Stirling), CX Partners and Flipside (both in London).

The sessions start by alternating short bursts of running – initially 60 seconds – with time spent walking. The running time gradually increases up to a solid 30-minute run, equivalent to 5k at a moderate pace.

Given the limitations on life for much of last year, it is no surprise that there was a surge of interest in Couch to 5K, which saw the app downloaded 1.4 million times over a 40-week period. Despite my preconceived notions, I’d been convinced it was worth a go after gradually absorbing incessantly positive word of mouth such as this:

I assume a lot of people have jumped in to say Couch to 5k but it genuinely is amazing. The only good app. Of any kind, I mean. Honestly life-changing.

It is SO GOOD and I don't evangelise for anything, I hate technology, lifestyle trends and praising things others have praised!

The clincher was from a friend who offered the kind of consumer advocacy most brands dream of. Part-way through the programme himself, he was brimming with enthusiasm about his experience of US Olympic gold medal sprinter Michael Johnson telling him what a legend he was for successfully running for a few minutes. I was sold, and so I finally got off my arse at the start of July. 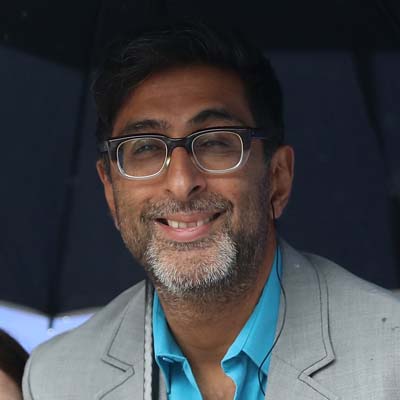 The app offers a choice of five trainers, including Johnson, Sarah Millican and Jo Whiley, but I went with Sanjeev Kohli (pictured right), who hails from the same Glasgow streets where I would be running. As mentioned, the first sesh – after months of inactivity – was excruciating, but I quickly felt a low level of fitness re-emerging.

It was all going well until week four, when there is a significant increase in the minutes spent running per session – the longest chunk of uninterrupted running time goes up from three minutes to five.

So I’m on one of these runs, listening to Screamadelica, feeling good, amazed by the difference the first three weeks have made. I’m coming up to the point in the session where I have to start running for five minutes. Sanjeev appears in my headphones to give the pep talk. Not only do I have what it takes to do this, he tells me, but he’ll be with me all the way.

This last point subsequently turns out to be cruelly misinformed. I set off running, and it’s going fine. But as the song Kill All Hippies turns into Accelerator, it dawns on me that more than five minutes must have passed. Where is Sanjeev to tell me to stop? While continuing to jog, I reach for my phone and turn on the screen.

The app has shut down.

Anyone who has experienced a technology fail at a crucial moment will know how dispiriting this was, but I instinctively chalked it up as “just one of those things”, blaming my ageing phone, or perhaps cosmic rays.

Not a massive deal to reopen the app and start again from the same point of course – except that I’d failed to realise the triangular bracket-type graphics either side of the pause button are actually “skip forwards” and “skip backwards” buttons. So instead, believing it was my only option, I made the very smart decision to restart the session from the beginning. 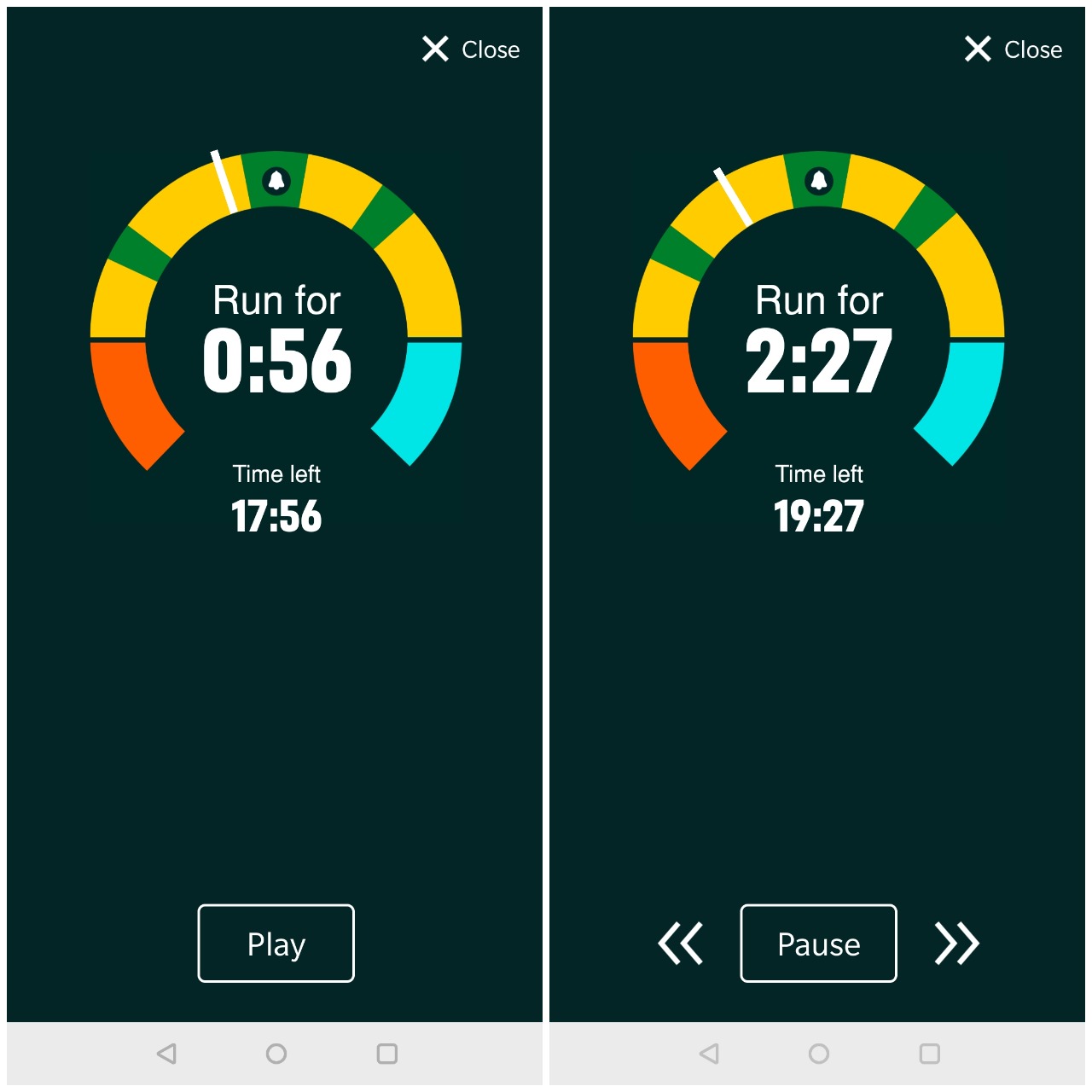 The nice little arrows, it turns out, are not just there to emphasise the pause button

This seemed like a fluke occurance so I tolerated it. Until the same thing happened again a few days later. And then a third time. I was slowly coming to the conclusion that this much-raved about app was actually a complete crock of shit. In one of a string of oversights, it never occurred to me to open the "support" section of the app – but I did eventually Google the problem. And you won't believe what happened next!

Here it is, the payoff from the headline you’ve been waiting for

It turns out there’s a function on Android phones called “battery optimisation” that is applied app by app, and aims to reduce the drain on a phone’s battery from apps that are running but inactive. On my phone, this was automatically switched on.

Because Couch to 5K runs audio files featuring long stretches of silence, my phone had been reading it as inactive, and switching it off. But this only became a problem once the stretches of silence reached five minutes, thus apparently passing the threshold of inactivity.

After discovering this, I switched battery optimisation off, and had no further problems for the rest of the nine weeks.

There are two factors that made this more likely to become an issue for me than most other users. First, my OnePlus 5T phone. I contacted Public Health England, which is behind the app, and its spokeswoman told me that they were aware of the problem – but that it is only known to affect OnePlus and Huawei devices.

It struck me that the app could have helped me avoid the issue of it shutting down mid-run by simply displaying a message when I first opened it warning of the problem. PHE said that something to this effect is currently offered on some Huawei phones – but OnePlus devices apparently have a delightful tendency to turn battery optimisation back on without asking, making this not a simple problem to solve. After receiving my query, however, PHE has rejigged the support section, bringing the relevant info to the top of the list. 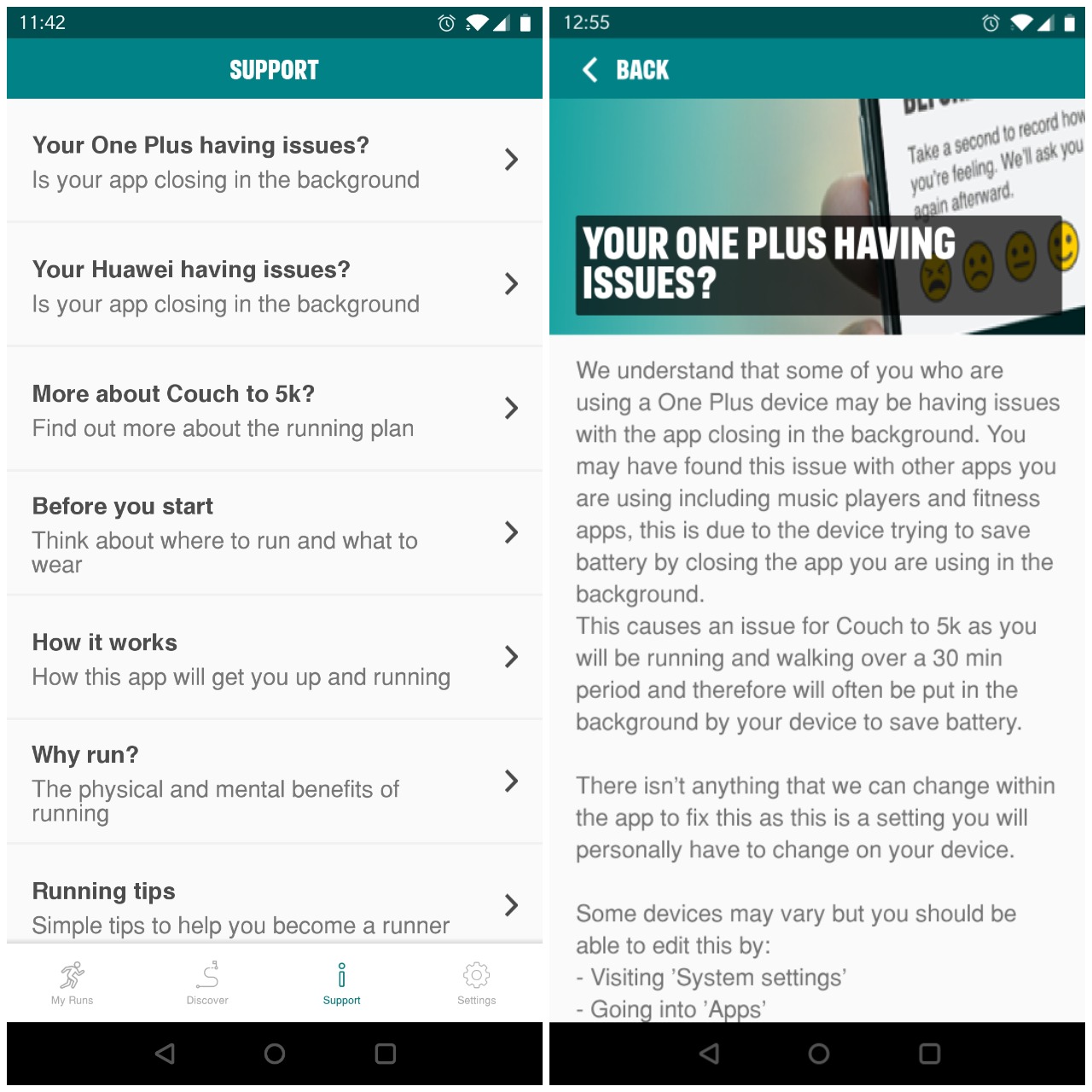 Second, I may well have been obtuse not to realise that the app’s “skip forward” button, which appears only when the audio is playing (ie. when the user is on the move), is not just a decorative design feature. But if your products are designed in a way that makes them inaccessible to the least competent users (hello), you increase the risk of losing those people.

I’m not writing this to single out Couch to 5K at all. We’ve all experienced these issues with any number of brands; they’re inevitable when dealing with a context like smartphone apps, when user experience can be at the mercy of a large number of manufacturers doing things slightly differently. The trick is to remain aware that problems are always going to arise, and that the more touchpoints you have, and the more complex they are, the more often this will happen.

As every chief marketing/customer officer knows, eliminating as much friction as possible from the customer experience is essential (well... in most cases). It may not always be in your power to iron these problems out, though – and when it’s not, the best course of action is to be as upfront as possible with consumers and provide whatever information is necessary to make their lives easier.

I finished the Couch to 5K programme last autumn. It’s a superb app that I would thoroughly recommend to anyone needing to improve their fitness from a low starting point – especially, for those who made the wrong choice of phone, when you know my one weird trick to stop it malfunctioning. It has improved my fitness dramatically. It has done nothing to change my views about running, however, which are that it is a form of fascism and a tedious way to spend your time. But with the gyms once again closed for the foreseeable future, I guess I’m going to have to learn to love-hate it once more.

What’s the one lesson from 2020 worth taking into next year?

Is the AKQA and Grey merger proof that ad agencies are in decline?

Hands off: can touchless experiences still be fully immersive?