If the so-called 'sharing economy' is such a good idea, why wasn't it tried long ago? It is, and it was, says Helen Edwards.

Helen has a PhD in marketing, an MBA from London Business School and is a partner at Passionbrand. She is a former PPA business columnist of the year.

Does this model sound familiar? A group of people is each in possession of the same underused asset. Another group would value temporary use of that asset, and is willing to pay a fair rate for the privilege. A third party with credibility steps in to bring these two groups together, manage transactions and ensure fair play.

Yes, it describes Uber, Crowdcube and Airbnb, but it also describes the Building Society movement, which dates back to the early-19th century. People with a little money to save were linked to others who needed funds to buy a home – all managed by the society, a distinct entity owned by its members. This was the sharing economy circa 1830 – and it could shed some light on the one bursting in upon us now.

Those early societies were born of a combination of idealism and need, filling a void that 19th-century capitalism had left gaping. The ambition wasn’t just to help people ‘get on the housing ladder’, as it is today, but to help them get the franchise – you had to be a male property-owner to vote.

But the founders’ visionary optimism did not translate to a romanticised view of the members. Getting a mortgage involved a long process of demonstrating prudence. Even as late as the 1960s, you had to have been saving for at least two years with your local society, and be ready to argue your worth in an interview in your Sunday best, before you might be ‘granted’ a mortgage up to 2.5 times your salary. A cautious view of borrowers was the key to making savers feel safe.

That scepticism was encoded, too, in the other great shar­ing enterprise of the 19th century: the Co-op. Here, the need for self-help had been even greater. For decades, workers on breadline wages had been systematically cheated by the hated ‘Tommy shops’ – retail monopolies run by mill-owners.

The co-operative movement embodied a wary view of human nature

Nor was there any shortage of idealism: the concept of pooling resources to buy and sell produce fairly had been tried numerous times. All had failed, and mostly for the same reason: they had provided credit. Then, in 1844, a group of 28 Rochdale flannel weavers hit on the right formula. They knew that families would get skint toward the end of the week, but they also knew what would happen if they let them buy things on tick. So they didn’t.

Both of these mighty social movements embodied a wary view of human nature, which is why neither came close to achieving the ideological purity envisioned later in the century by Marx. "From each according to his ability, to each according to his needs" describes the sharing model of the ‘commons’ – which was so savagely intellectually dissected by the ecologist Garrett Hardin a further century later.

Hardin’s seminal essay, ‘The Tragedy of the Commons’, set up a parable in which the reader is asked to imagine an area of pasture "owned by no one and open to all". What is the rational course of action for each herdsman? Self-interest dictates that he will add to his herd and maximise his use of the common grazing land, if only because he reasons that others will do likewise. When all indeed do, the pasture is slowly destroyed. Hence the tragedy.

The closest we get to this model today is probably the NHS, free at the point of need to all of us, whether we have lived like monks or smoked 80 a day. The £930m deficit racked up in the first quarter of this financial year is unlikely to be the last.

Wikipedia is edging closer to the commons model now that its ‘gatekeeper’ editorial base is rapidly dwindling. The site’s founder, Jimmy Wales, has recently expressed concern that the scourge of ‘PR’ entries will be allowed to overwhelm the site.

Here’s the relevance for marketers. You will get caught up in the movement as those around you seek ways to become part of the exciting, sharing economy. This will involve you facing in two directions at once, as it so often does.

Of course, embrace that idealism and seek visionary sharing opportunities, preferably those that meet real human need. At the same time, guard against naivety. Marketers are the ones in the organisation with the most intimate connection with real people – the ones with all the research, the ethnographic studies, the verbatims and video diaries.

Marketers, above all, should understand that people are complex, and only too capable of selfishness, deceit and the will to gain advantage.

The danger is that we all become dazzled by the digital technology that has changed so many things in its brief span in our 1m-year history. It’s a big ask, though, to expect it to change our shared human nature. It hasn’t, and it won’t. 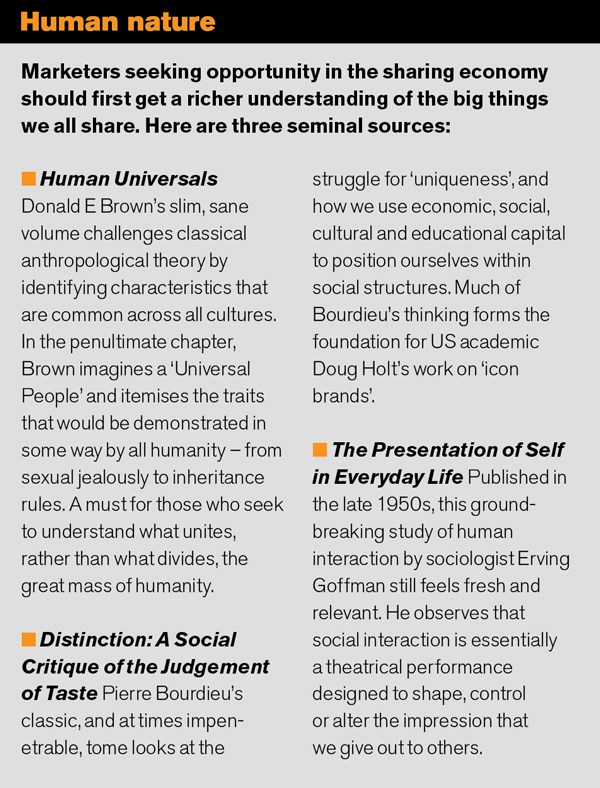 The four polarities marketers need to become leaders by example

How Uber and Airbnb created the 5* consumer

The future of the sharing economy: boom, brand or bust

The future consumer wants it all fast, free, fair and shared: are you a postcapitalist brand?