The fast-food brand and Mother brought musicians from the American south into KFC restaurants for a series of gigs to infuse a limited-edition burger range with an authentic and soulful US vibe.

KFC introduced its Southern Legends range of four burgers, inspired by the tastes of southern US locations Tennessee, Alabama, Texas and Nashville, for a limited time earlier this year, with each burger available for a two-week period.

The fast-food chain wanted to "hero" each burger while communicating the urgency of a limited-time offer to drive sales. Working with agency Mother, the brand devised the Southern Legends music tour to bring the burgers’ provenance to life, showcasing the tastes and sounds of the southern states to the UK for eight weeks across August and September.  The music enabled people to experience the south for themselves, rather than just being told about it.

To widen the Southern Legends’ reach, a series of TV ads highlighted the different burger featured in-store for each particular fortnight, and the ads’ creative theme was also applied in restaurants and across online and outdoor media.

"We wanted to establish the provenance of the Southern Legends range as authentically rooted in the southern states, in contrast to the clichéd Americana ranges seen across the category," Jack Hinchliffe, innovation director at KFC UK and Ireland, says.

Music was so central to the idea that it couldn’t just be about finding great tracks and using them for context – finding the right southern bands, bringing them to the UK and hosting the gigs themselves were all key to establishing the credibility of the tour and the range.

Up-and-coming talent, such as Texas artist Dr Joe (pictured), was flown in from the US, with gigs taking place in KFC restaurants across the UK. As Hinchliffe explains, hosting gigs in the restaurants helped to capture the spirit of the brand – creating "the sense of swagger and energy that is integral to KFC". 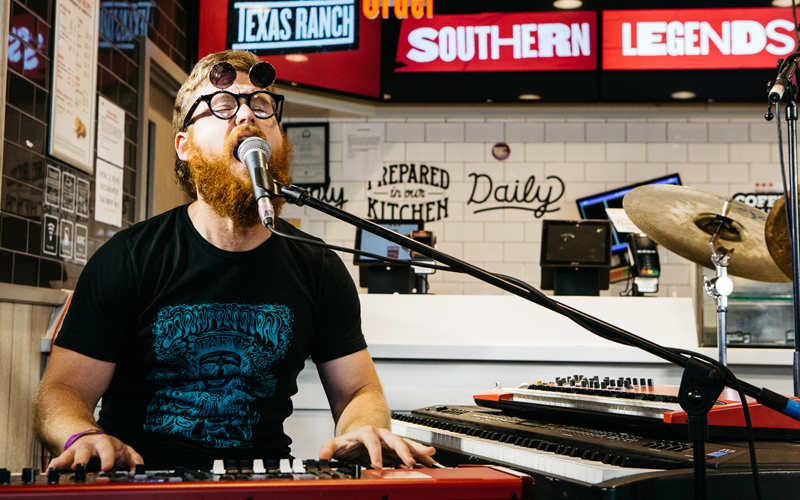 Chris Gallery, partner at Mother London, says music is a huge part of how the agency is refreshing KFC’s brand image. As well as using music that people already know and love, the brand is starting to play a modest role in promoting new music.

"We’re drawing on influences from the brand’s roots in the American south, but never in a nostalgic or old-fashioned way. It’s about feeling fresh, soulful and authentic, nothing too manufactured or obvious," he says. "For KFC, the authenticity of the music [from the Southern Legends tour] really helped bring some depth and richness to how we talked about the authentic flavours of the food, as well as helping to modernise the overall brand perception."

Hinchliffe adds that showcasing upcoming American bands helped to establish credibility and drive excitement around the burgers, with the gigs providing an exclusive and unexpected experience. Amplifying the gigs through live streams and capturing social content helped to give KFC the reach it needed, making it feel accessible to everyone.

This article is part of a special report on music events. To view the full report you need to be a Campaign member. For membership options go to www.campaignlive.co.uk/membership

Gaviscon, M&Ms and KFC top Nielsen chart of most effective TV ads of 2017

KFC "The whole chicken" by Mother