Brands can have difficulty finding their 'voice' in social media, but when they get it right, the resulting level of consumer engagement and appreciation makes the effort worthwhile.

For me, one of the most interesting questions in social media is: what does your social voice sound like?

I am talking about the tone of voice a brand adopts in social media and the things it says as it engages with the wider world.

It is not easy to get right. You want to ensure that your Twitter feed is lively and interesting enough to grow and attract followers for reasons other than wishing to air their complaints.

While all marketing is about communication, when it comes to social it turns, for the first time, into a conversation, rather than one-way messaging.

A brand might have a spokesman or mascot, and its ads might have a certain strapline and an approach to direct marketing, all of which are designed to convey brand identity, values and personality; but, while all of this kind of activity is designed to 'speak' to the audience, the messages are passive.

No one knows what Brand X would 'sound like' if it began to talk and, as we have seen more than a few times, this is not always a successful process.

Brands, you could say, have had problems finding their voice.

Sometimes the problem is that they say little or nothing on social-media sites. Other times they say a lot, but don't listen. Part of this is borne out of fear of how things can go wrong as fast as you can type a hashtag.

Take technology brand Ricoh, for example. Last week it launched a social-media campaign, but marketing director Chas Moloney told Marketing it had to be careful because of what 'happened to Waitrose'.

There is some debate about the #WaitroseReasons Twitter campaign, which took an unplanned turn after its hashtag was hijacked and jokes were posted about the supermarket's reputation, making headlines in the process.

Waitrose posted a tweet saying it found the 'middle-class' jokes funny, but its approach in that instance was reticent. It should have been bolder, retweeted, and joined in the joke, or at least given humorous responses. 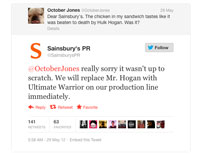 It should have been more like Sainsbury's in May, when it responded to a tweet complaining that a chicken sandwich from the supermarket had tasted as though it had been 'beaten to death by Hulk Hogan'. Sainsbury's amusing response, referring to Hogan's fellow wrestling legend Ultimate Warrior, showed great use of tone and character, and was widely shared. 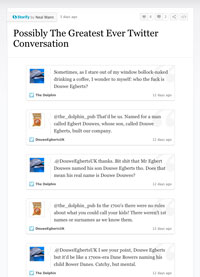 This example brings us nicely to what was billed by one user as 'possibly the greatest conversation on Twitter ever' - between coffee brand Douwe Egberts, which has a small following, and the distinctive voice of The Dolphin pub in Hackney's unofficial Twitter feed. The two came together and a highly entertaining conversation ensued.

There have been some other inspired examples of brands on Twitter showing how they are willing to engage, try something a little different, and win plaudits for it. With Sainsbury's, it was a single tweet.

The Betfair Poker Twitter feed is another. Its account has crafted a very individual voice and it works well. More recently there was the irreverent and geeky Twitter feed from the Oxford Street branch of Waterstone's.

In the case of Douwe Egberts, it did a few things right. First it listened and then it responded to a tweet from The Dolphin. Their conversation highlights a brand being willing to engage and ride with the conversation - with all its quirks.

That points to what brands need to do more of when it comes to social, and part of that comes down to the fact that in many cases no one has sat down and down and thought about this, which is something that all brands need to be doing more.

Gordon MacMillan is social-media editor at the Brand Republic Group and editor of The Wall blog @thewalluk. Follow him on Twitter: @gordonmacmillan.