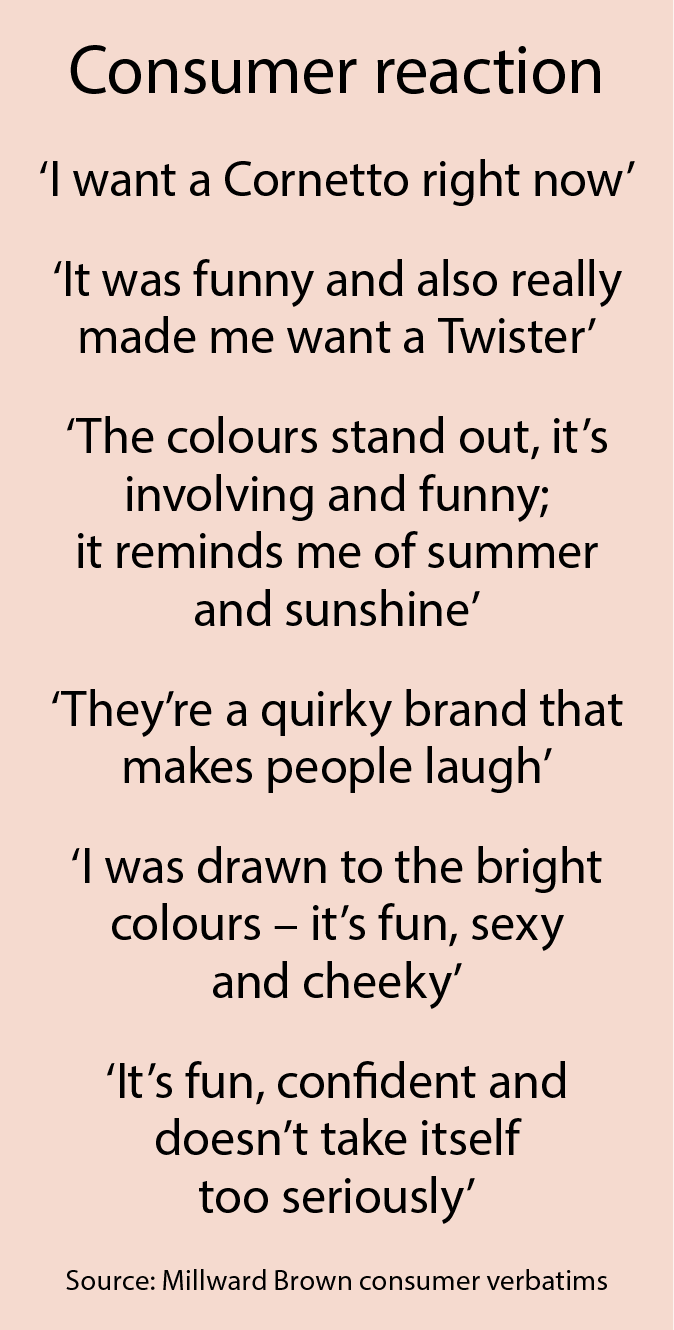 It’s a common problem now for global companies. When you’re focusing your media firepower on your power brands, what happens to the long tail of smaller brands that gets left behind?

For Wall’s, this had become a serious issue – but a bit of creative thinking transformed its fortunes in the UK and beyond, and still continues to resonate.

In 2014, Unilever’s power-brand strategy meant UK Wall’s ice-cream media spend was focused on Magnum (a global €1bn+ brand). And, as a result, Magnum sales were growing strongly. Meanwhile, Wall’s classic ice-creams – much-loved brands such as Funny Feet, Twister and Calippo – were individually too small to justify support and hadn’t been advertised for more than 10 years.

This was hitting sales. Despite Brits still loving these old favourites, they were forgetting about them and not eating them very often.

So this long tail of Wall’s classic ice-creams was in long-term decline – value market share was falling at 3.6% per annum. Attempts to boost sales with price cuts had made little difference (the impulse sector is not very price sensitive) and had hurt margins. Worryingly, classics distribution was now starting to drop too.

If the situation continued, sales could go into freefall.

This was a problem. Because collectively these classics played a vital role in the Wall’s portfolio – responsible for 50% of the company’s UK ice-cream revenue and, importantly, an even higher percentage of profit.

Wall’s ice-creams have been a much-loved part of British life since 1922. Thomas Wall used tricycles, a bell and his "Stop me and buy one" slogan to prompt people to purchase them.

Ice-cream buying hasn’t changed much over the years. They aren’t called impulse products for nothing. No-one writes "Buy a Cornetto" on their shopping list in the morning. Ice-creams are a spontaneous purchase – spurred on by the sun shining or some kind of prompt to buy one while on the move.

Over the years, advertising for the classic ice-creams performed this same prompting role to make people think: "Ooh, I fancy one of those." Our task was a pretty simple one: do the same thing again in 2014.

We needed to remind people out on the streets of the existence of these loved but forgotten classics, prompting people to buy them again – so increasing sales and share.

Actually, there wasn’t much more to it than this – no need for product stories or competitive benefit. We did want to give Wall’s some personality, though – competitor ice-creams such as Snickers and other confectionery brands had highly engaging personalities. Wall’s classics lacked contemporary "punch".

Simple but not easy

• The budget was just £2.1m (our confectionery brand competition spent this every 21 days).

• We didn’t have one product to support. We had a portfolio of them.

• It’s hard, and wasteful, to try to prompt ice-cream eating when it’s raining. Which, in Britain, it often is.

• How could we prompt sales when the sun was out, but not waste precious funds when it wasn’t?

We needed a different sort of campaign. A multi-product one that would show the ice-creams – nothing makes us want one more than seeing one – as frequently and as close as possible to where they could be bought. We wanted the campaign to have a contemporary tone of voice, true to our brand and products, giving people the feeling they get when they lick an ice-cream: happy, uplifted, less serious.

Ice-cream brings out everyone’s child-like, mischievous side. And, unlike chocolate bars, you have to focus on eating ice-cream before it melts. So it forces us to take time out and say goodbye to the "serious" around us: the London traffic, the stuffy commute. ›

The creative team had an idea: "You know when you show an ice-cream with a bite out of it, it looks a bit like a mouth?"

And so "Goodbye serious" and the talking ice-creams were born.

Talking ice-creams was a big but simple idea. Delicious product shots, colourful backdrops and funny, cheeky lines related to the time and place they are seen – all giving us Brits a "Goodbye serious" feeling over the summer.

It seemed almost too simple. But it met the business needs smack-on. It was cost-effective and flexible enough for multiple executions for our range of products and showcased those products in close-up. It also worked just as well on a poster as a Facebook post and allowed us to create executions specific to locations or events. This meant more desire for our ice-creams, when and where people could buy one.

The real power in this campaign was unleashed through the way that media worked hand in hand with the creative.

As an impulse buy, Wall’s lives and dies by what Professor Byron Sharp calls "mental and physical availability". We needed to prompt people as frequently as possible, and near ice-cream outlets – on the streets, at bus stops, garages, cash machines, or checking Facebook when out and about. This was "Stop me and buy one" for the 21st century. 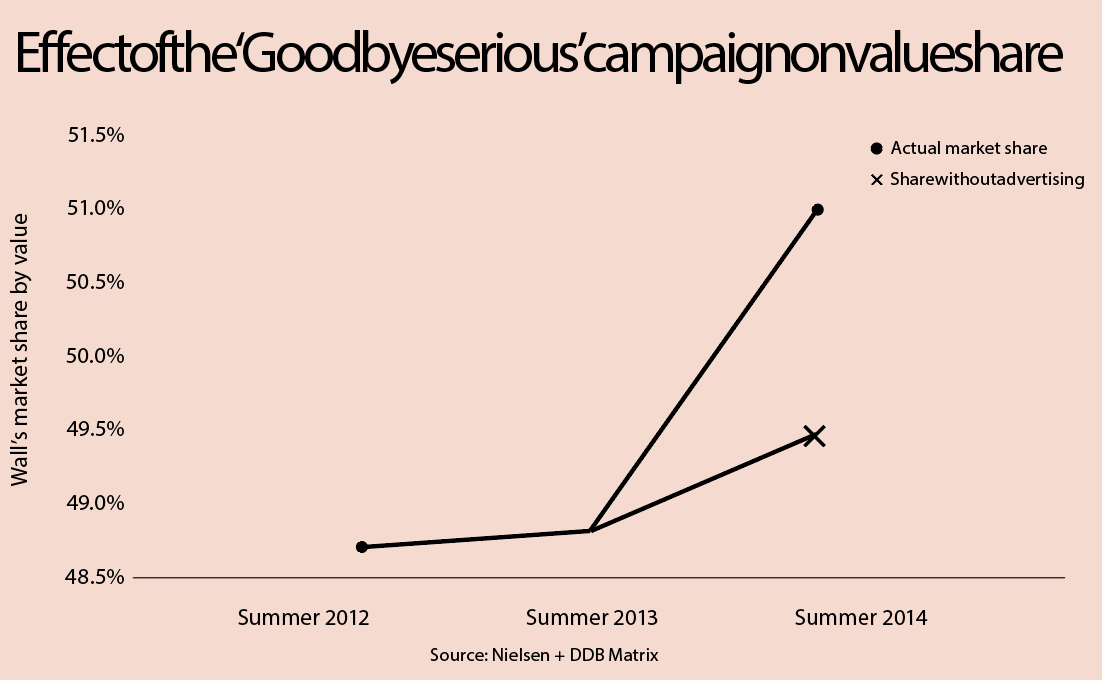 Over four months of summer 2014, we ran 70 talking ice-cream executions featuring our classics commenting in mischievous and contextually relevant ways – on the weather, place, event or transport mode across multiple media channels. This was across traditional on-street media (posters) and new on-street media (mobile, Facebook and Twitter).

To use our limited budget smartly, we focused spend on major cities, particularly London. Eighty per cent of spend was thermally activated on digital posters, Facebook and Twitter, so were paid for only when temperatures hit a certain level, while 30% was geo-targeted (in other words, linked to where ice-creams were available to buy). 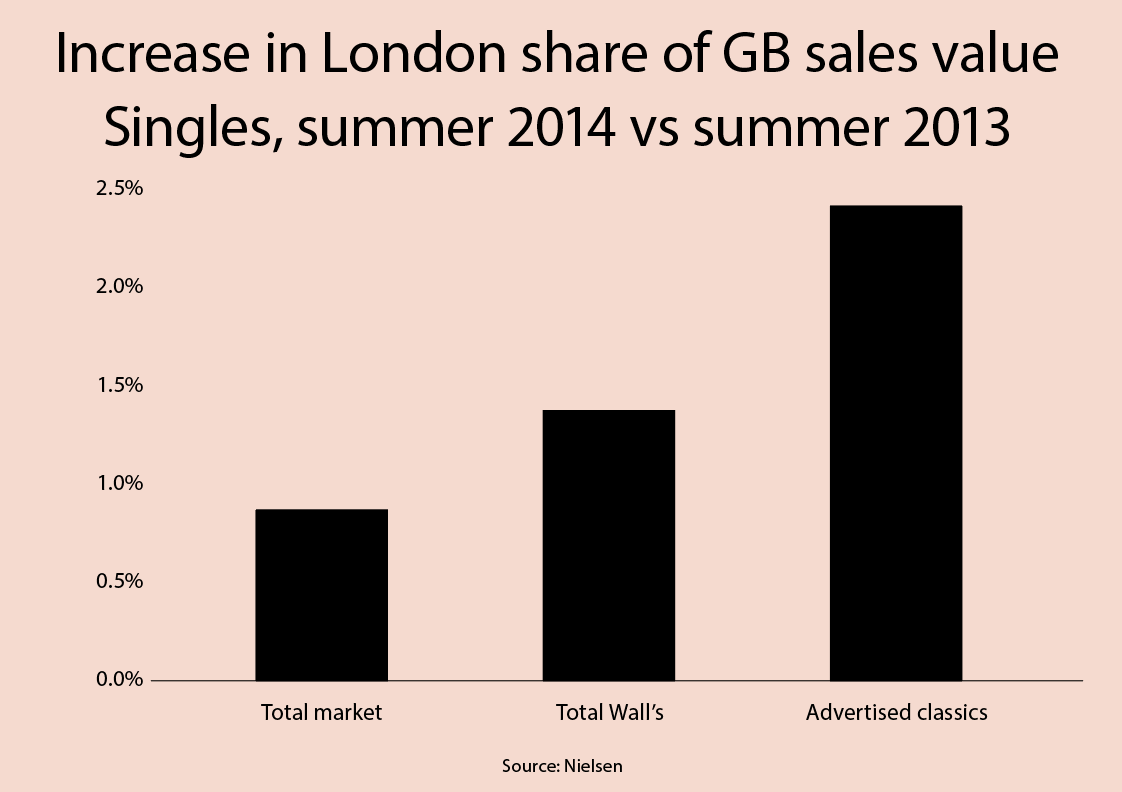 The 2014 talking ice-cream campaign resulted in Wall’s most successful UK summer in recent history – spearheaded by the performance of the revitalised classics. The week that our new campaign broke, share began to rise steadily – and by the end of the summer, volume and value share had increased by 6% and 4% respectively (see opposite, top).

Wall’s grew in total, but our long tail of featured classics increased the most (see opposite, middle).

This was "Stop me and buy one" all over again as our advertising created the "mental availability" we needed as an impulse brand. A huge proportion of people (especially our young target audience) noticed our campaign (93% vs the FMCG norm of 64% – source: Clear Channel). This was particularly remarkable, given our small budget and that it was a poster and social-media-led campaign. People loved the colourful, more mischievous personality of the new campaign. It felt more modern, adult and fun, while still true to ice-creams and Wall’s.

Econometrics shows that two-thirds of Wall’s value-share gain was due to the new campaign (see opposite, bottom). The new campaign sold an extra 2.7 million ice-creams over the summer.

We did some interesting channel analysis, too, which showed us how old and new media worked together. Outdoor was the most effective medium, but Facebook was more efficient –achieving almost as many sales on a lower spend. The two worked brilliantly in synergy.

Every £1 spent on "Goodbye serious" generated £1.84 of short-term revenue. This is much higher than Unilever and FMCG benchmarks (£0.61 and £0.54, respectively – source: DDB Matrix/IRI).

We know that, in general, the size of a brand is one of the most significant determinants of ROI – the larger the brand, the more likely to generate a high ROI. It is highly unusual to achieve a higher-than-average ROI on a smaller-than-average brand. But that is what this new portfolio campaign enabled Unilever to achieve for the classics. 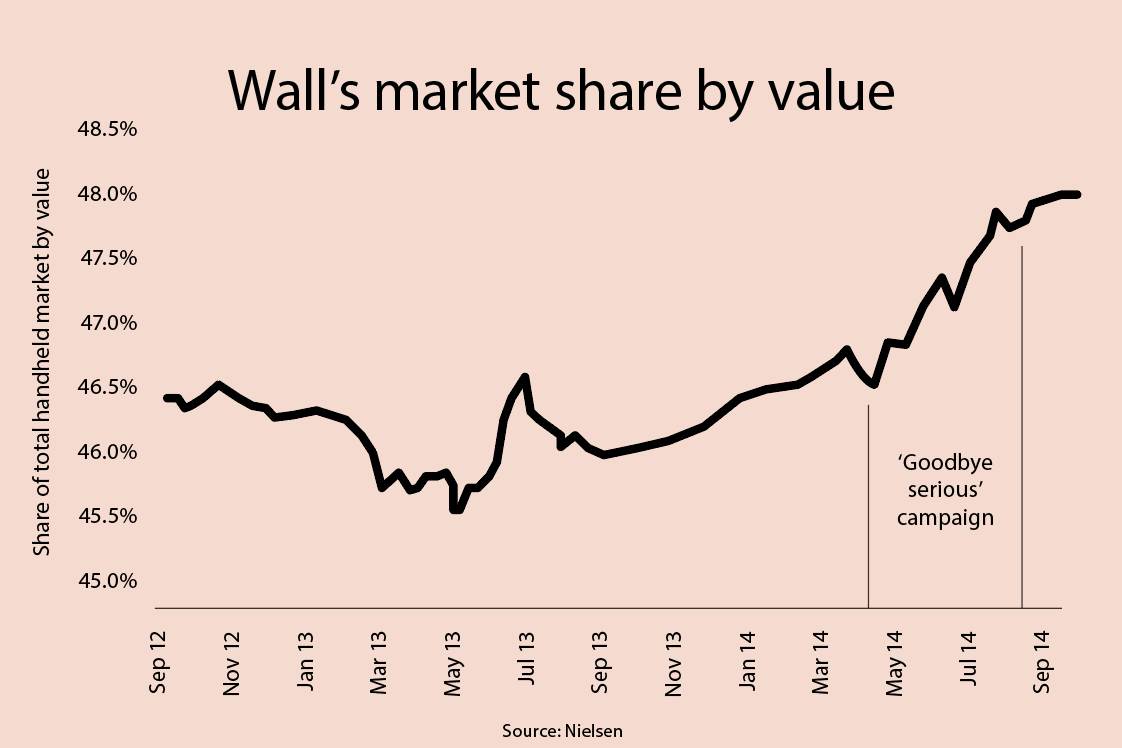 The global story since then

Perhaps the biggest testament to the UK campaign’s success is Unilever’s global reaction to it since the launch in the summer of 2014.

Now coming into its fifth year in the UK, this new long-tail brand support campaign for Wall’s classics has been so successful that it’s transforming the way Unilever sells these ice-creams around the world.

The Wall’s global "heartbrand" is made up of a huge range of country-specific ice-cream brands across the globe – eg. Holanda in Mexico, Kibon in Brazil and Langnese in Germany. All these brands have a rich heritage. And all have within their range a long tail of quirky products that generations have grown up with and love.

Weird and wonderful ice-creams like the cowboy Bubble O Bill with his bubble-gum nose in Australia. Or the pointed finger-shaped lolly Flutschfinger in Germany. Or the Dolomites-inspired Dolomiti lolly in Italy. All are much-loved local ice-creams. But all are easily forgotten when budgets are deployed on global power brand Magnum. Until the talking ice-creams came along.

Our talking ice-cream campaign has now been rolled out to more than 31 markets worldwide. Each market supports its own long tail of previously unsupported local classics using the global campaign "recipe", but creating locally derived and specific executions. More than 129 local ice-creams are now being supported by this campaign.

The flexibility of the idea means countries have found many fun ways to create cultural currency from the campaign – from an "alternative election" between competing Algida local ice-creams in Turkey at the time of its general election, to the Austrian Eurovision Song Contest railway station takeover by local brand Eskimo.

And it’s working. Just two years into the global roll-out, the brands featured as talking ice-creams around the world were responsible for the largest year-on-year incremental turnover of any part of Unilever’s ice-cream business. The campaign also significantly increased profit from these products. 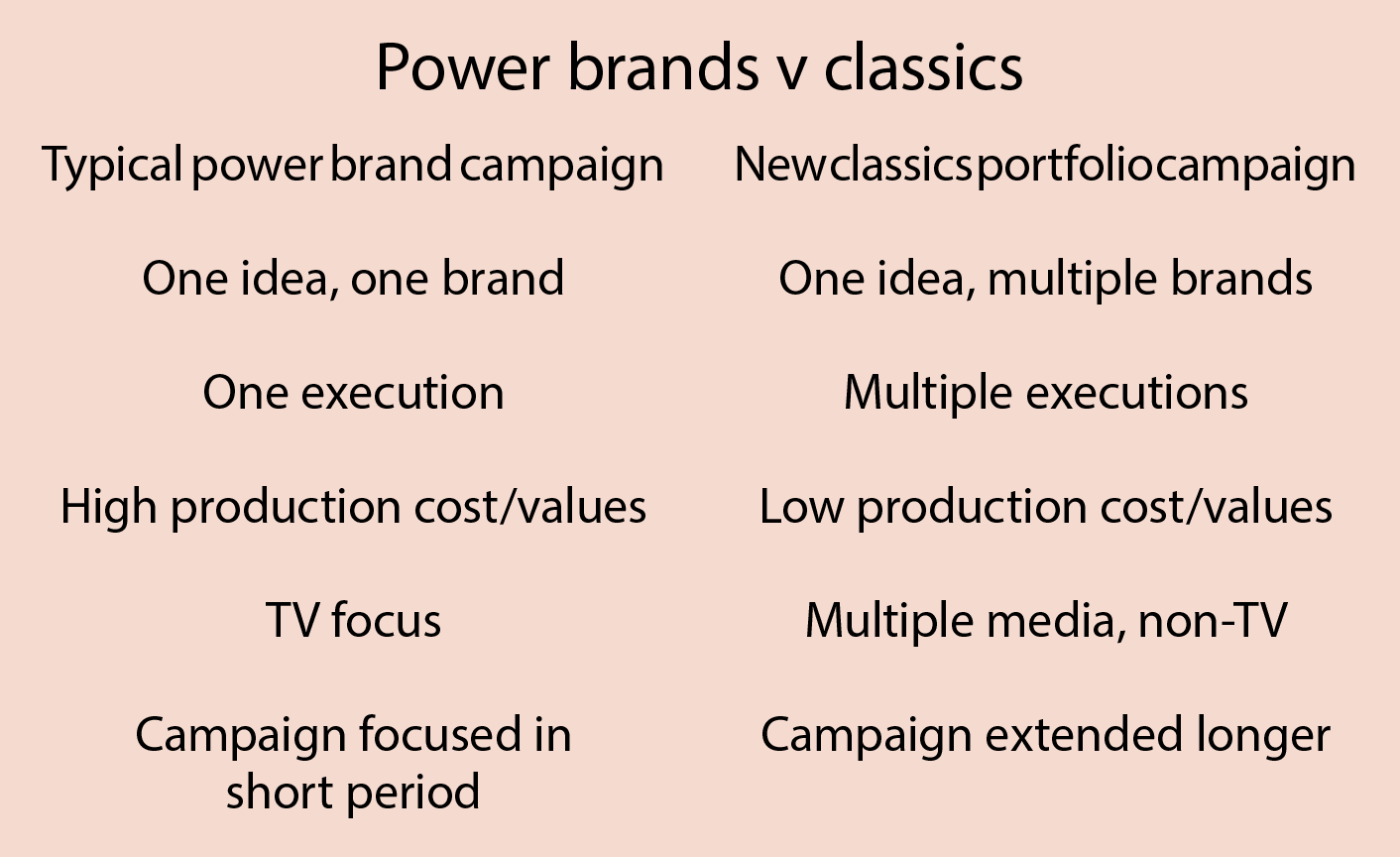 Communication ideas are perhaps at their strongest when they are useful to businesses, not just when they profitably grow sales.

In this case, the talking ice-creams, on a small budget, smartly solved a big business problem for Unilever. Namely, how to focus on a few global power brands while still supporting many smaller but collectively very profitable brands.

From Funny Feet in the UK to Bubble O Bill in Australia, we’ve shown the answer. A big idea, using a small budget. Breathing new life into Wall’s profitable long-tail ice-cream brands around the world.

How WildAid and Grey tackled an elephantine task