The owner of more traditional brands including Blossom Hill, Lindeman’s and Penfolds has in recent years brought two brands to the market specifically designed to appeal to men aged 18 to 34: Gentleman’s Collection and 19 Crimes.

The latter is named after the list of offences that saw British convicts transported to Australia, and the whole universe of the brand is built around the real stories of men (and one woman) shipped to the other side of the world.

The brand has just introduced a new variety to the UK – a "dark red" called The Banished – and along with it, an AR mobile app, created by J Walter Thompson San Francisco and Tactic. When a phone’s camera is pointed at a bottle in the app, the character on the label becomes animated and begins to tell their story.

The individual on the front of The Banished is James Wilson, who was convicted of treason in the nineteenth century.

"Our insight clearly shows that millennials like brands with real and authentic stories and our AR innovation really brings the 19 Crimes story to life," Treasury Wine Estates managing director Tom King said. "There is nothing else like it out there in the market."

The app is the latest marketing initiative for the brand that flies in the face of typical practice in the wine industry.

Over the summer, the brand was the official wine sponsor of the London Craft Beer Festival and its Edinburgh and Bristol counterparts.

Speaking to Campaign earlier this year, King said that partnership recognised the overlap in the marketing missions of 19 Crimes and many of the leading craft beer brands.

While craft beer has often used engaging and irreverent branding to get mass market lager drinkers interested in a more sophisticated product, 19 Crimes is aiming to do something similar for young men with little experience of wine. 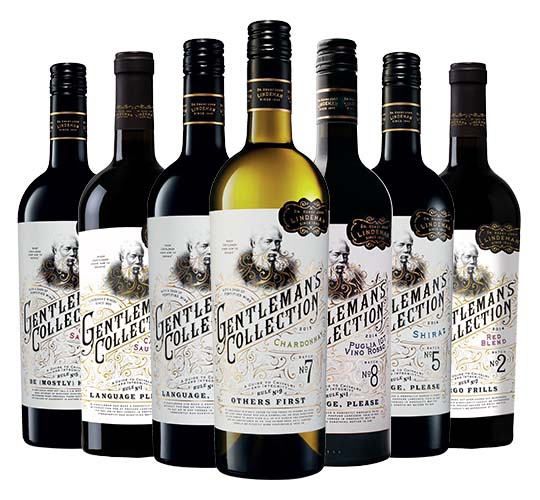 The same goes for Gentleman's Collection, which plays humorously with themes of gentlemanly conduct by featuring behavioural rules on its bottle labels.

Both brands grew out of attempts to meet consumer needs among the target audience, King said.

"We have a model that we’ve built of consumer needs, and one of those is about adventure – that’s where 19 Crimes was born – and another is about status, and we’ve done it in a tongue-in-cheek way, but that’s where a lot of the inspiration is from for Gentleman’s Collection."

The latter, he said, was positioned to be aspirational, but reflected a shift from how sophisticated products were marketed in the past.

"Sophistication doesn't have to be really serious," he said. "The bottle is really premium, the design is really important. But we have these gentlemanly rules that should raise an eyebrow and a smile.

"It’s aspirational, but they’re also really amused. I do think that’s quite different from what wine could do before."

19 Crimes, he added, was influenced by another factor TWE has picked up in its research: the importance of storytelling.

"If you look at the wealth of information there is now, and the move from brands being expected to just tell you something, to more of a discovery process, what we’ve found is there needs to be a genuine story behind things," he said.

Emojis were designed to be a global language - they're not