Award-winning case studies need more than tales of effectiveness. You must prove it with numbers

Why should you care about it?
Winning effectiveness charts can be invaluable ammunition for convincing sceptical colleagues of marketing spend’s value.

As former Camelot chief executive Dame Dianne Thompson, 2016 IPA Effectiveness Awards chair of judges, says: "The chart that shows the effectiveness of what you have done in the past year is vital." If there is an unidentified winner lurking in your data, how would you spot it? And if it doesn’t yet exist, what elements do you need to create one?

Show dramatic contrast
An impressive chart does not have to show a hockey-stick-shaped upswing. For instance, the emotion-driven advertising John Lewis introduced in late 2009 made the department store more appealing to consumers, and sales duly rose.

Less-often cited is that sales growth stalled as the economy slumped. The retailer could still chart how its branding helped it outperform the category.

Match the timing of activity and impact
Start and end times of marketing activity are left off charts surprisingly often.

When Kärcher, a manufacturer of pressure washers, analysed the launch of its Window Vac cleaning tool, it showed sales responded to its productdemonstrating TV ads quickly.

Sales gradually dipped only when spots were off-air, suggesting the ads had strong residual benefits.

Link behaviour change with exposure
It is important to show behaviour changed in line with brand exposure, and not just awareness, which can grow because the brand is expanding.

In examples, such as the Home Office’s 2014 Fire Safety case, behaviour change was shown to be greater among audiences who saw multiple executions.

Foster's sales increased as soon as the ads went on air

Offer the longest perspective you can 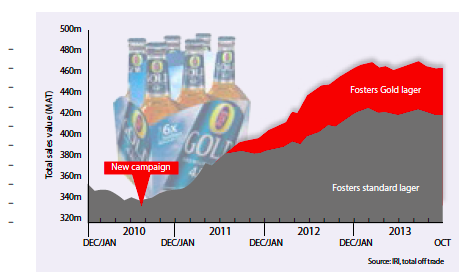 The longer the term your chart covers, the more impressive it is likely to be. The key chart in Foster’s 2014 Grand Prix-winning efectiveness case shows multi-year growth, using moving annual totals to remove any seasonality efect. The chart also shows the sales trajectory for two diferent brand variants in the Heineken stable: Foster’s standard lager and Foster’s Gold. The resulting benefit is thereby displayed as both materially significant and sustained for the brand owner.

Snickers shows post-'You're not you' upswing 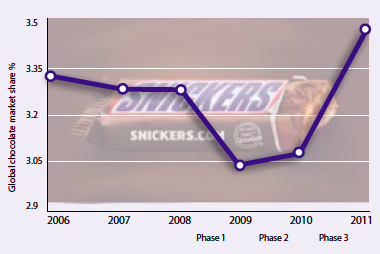 Few case study charts can show as dramatic a recovery as this example from the 2012 global ‘You’re not you when you’re hungry’ case study by Snickers. This narrates how a universally-relevant core idea and the humorous use of local celebrities by BBDO agencies worldwide created an upswing in sales and value market share. This chart shows the momentum was maintained as the brand idea was lauched (phase 1), rolled out to first to 34 markets (phase 2), and then to 54 (phase 3). Of the eventual 58 markets that ran the campaign, the brand grew its share in all but two.

For more effectiveness material from the Institute of Practitioners in