Wired's recent native ad for Netflix is called "TV got better". It's basically (as all native ads are) a lengthy advertisement masquerading as a piece of editorial.

It was written by anthropologist and author Grant McCracken (not Phil? Shame).

It features text, charts, reader polls and audio of an interview with the author and a video interview with Mitch Horwitz, the co-creator of Arrested Development.

The story thrust is that streaming video is fuelling TV’s new golden age.

It suggests that the couch potato is dead and people no longer channel hop, preferring instead to gorge on "box-sets" of content. I’m assuming the author has never watched ‘Gogglebox’.

People like to do both and to say that the "old" way is dead is, frankly, preposterous. However, that isn’t my biggest problem with it. To be honest it’s a bit, well, boring. 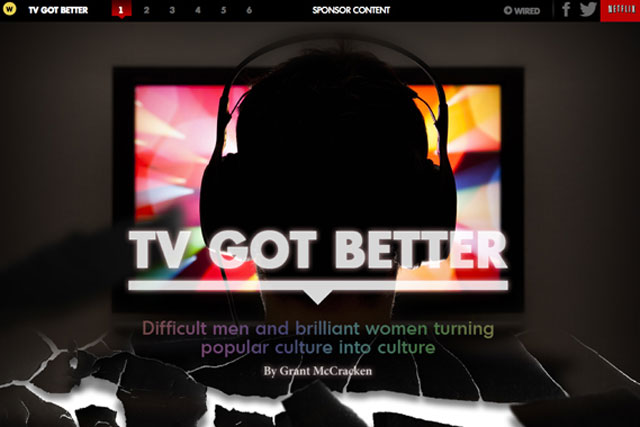 The Horwitz interview aside, there’s nothing to really grab the reader. I don’t even think it’s up to the standard of Wired’s usual writing.

And as a piece of multimedia editorial it’s not in the same league as The New York Times’ stunning "Snow Fall" tour de force about the avalanche at Tunnel Creek that this piece is misguidedly being compared to. (It’s impossible not to engage with that NYT piece if you get the chance discover for yourself why it quite rightly won a Pulitzer.) 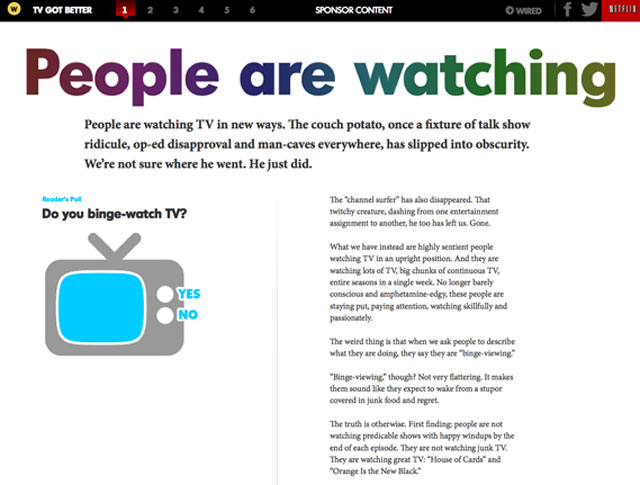 Now I’m all for work that endeavours to get "under the advertising bullshit radar" of viewers/readers but when you do that you ultimately have to reward them for it.

When people realise that the wool’s been pulled over their eyes they don’t mind so much as long as they have gotten something out of the process. If it’s made them laugh, cry, become better informed or simply entertained them, then it’s okay.

If, on the other hand, they have got little more from the experience than a ham-fisted "sell" then they’re going to be pissed off. When we produce any piece of advertising, whether it’s offline or online, it has to answer the same question it always has – is it something that will move the viewer/reader/listener to share it?

If it doesn’t cut through, make someone notice and talk about it then what’s the point of it? Native, just like any medium, has the potential to be amazing. It won’t be though if people don’t push themselves to make it so.

BuzzFeed's Will Hayward on native advertising and the future of lists

Media 360: 'Native advertising is more than just a feature in The Guardian'