Where do we stand on Wonga.com? With Christmas just round the corner, it seems an appropriate time to examine our marketing conscience about the in-your-face payday lending brand.

The issue many have with Wonga is the ethics of short-term, high-interest loans - a product that has been banned or regulated out of existence in several US states.

Such concerns are not a deterrent to Wonga or its chief marketer, Darryl Bowman. Whether you view Wonga as a legal loan shark targeting the most vulnerable in society, or a spunky, innovative brand exploiting a gap in the lending market, it is hard to argue with the logic of its marketing and business strategy.

In June, Saatchi & Saatchi director of strategy, Richard Huntington, wrote as much in this magazine, hailing the brand's ad campaign, 'with its cast of aged puppets confidently au fait with modern technology' as providing 'a master class in cut-through, engagement and attribution'.

He also pointed to Wonga's 'prodigious' net promoter scores, consumer endorsement that Bowman suggests lies at the heart of critics' dislike of its business model.

The brand's success - it is predicted to hit revenues of $1bn next year as it signs up thousands more customers - speaks to the dark side of what the company itself has always regarded as its strong suit: Wonga providing short-term credit with transparently high APRs to consumers and small businesses.

If British high-street banks aren't lending, and there isn't much choice in near-prime credit cards, what is the alternative? Wonga's strike rate of granting 6m loans since it launched five years ago is a sobering thought.

We should also be uneasy that the benign alternatives to payday loans - internet-based community banks, or better education on general financial management - don't have Wonga's ad budget. 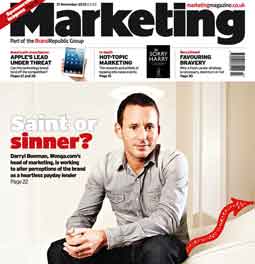 In this week's Marketing interview, Bowman gamely talks about using marketing to tackle 'misconceptions of our business': the company rejects 60% of loan applications, but this is hardly a consumer selling point. He was speaking ahead of Wonga's apology on Wednesday to anti-payday loan MP Stella Creasy for Twitter attacks on her made by a Wonga employee.

The issue for Bowman, as our cover attempts to illustrate, is that, no matter how successful the brands are, the marketers of payday loans will always be on a hiding to nothing.

Noelle McElhatton is editor of Marketing

Wonga.com banned from advertising in Plymouth as CC investigation hots up

Wonga.com's Darryl Bowman: 'Maybe it scares people that we are relevant to our customers'