Half of agencies yet to make redundancies, while two-thirds of businesses have already introduced pay cuts for all staff, survey shows.

The worst of adland's redundancies has yet to come, with about half of agencies saying they will have to make cuts before the government's furlough scheme comes to an end in October.

That's according to Coronavirus Media Business Outlook Survey Mark 2, the second iteration of research from Moore Kingston Smith around the impact of coronavirus. It found that almost 17% of agencies have already made cuts, with the majority reducing staff by up to 10%.

However, almost 51% plan to make redundancies this year. And the cuts are forecast to be deeper, with 58% predicting staff reductions of up to 20% and another 22% predicting redundancies for more than 20% of staff.

The majority of respondents said they are planning to implement job cuts within the next two or three months, before the furlough scheme – relied upon by 85% of participants – comes to an end.

Salary cuts, generally seen as a way of preserving more jobs and avoiding large-scale redundancies, have also been widely utilised.

Although only 55% of agencies thought they would cut pay when asked in the initial study in April, when asked in June 68% had introduced this measure.

Less than 40% have implemented pay cuts for the entire workforce, with 14% confining salary reductions to senior management, nearly half of whom had their pay packets cut by more than 20%.

While 44% of agencies were contemplating reducing working hours for staff in April, 39% had actually done this by June, with a further 20% still considering it as a future option.

However, predictions for revenue levels have improved since early April, when only 2% thought these might improve in 2020 compared with 2019. In June, 9% of respondents predicted an increase in revenue.

Moore Kingston Smith also asked when agencies were planning to reopen their offices. The answers were varied, from "we already have" (12%) to "January and beyond" (5%). However, the most popular month was July (28%), followed by September (21%).

"It has been widely documented that working life will likely never return to how it was pre-coronavirus – more flexibility, agile working and days spent working from home being the anticipated ‘new normal’," the report noted. "Many agencies look forward to the savings this will ultimately bring in property costs, especially those in central London."

When will it all end?

Looking ahead to the long-term viability of their business, 40% said despite being "very concerned", they thought their business would make it through.

Factors such as how well the government stimulus package works, whether there is a second wave of infections and how quickly a readily available vaccine can be produced are of course all unknown, so answers were understandably mixed when asked about predictions on when client activity would return to pre-coronavirus levels. 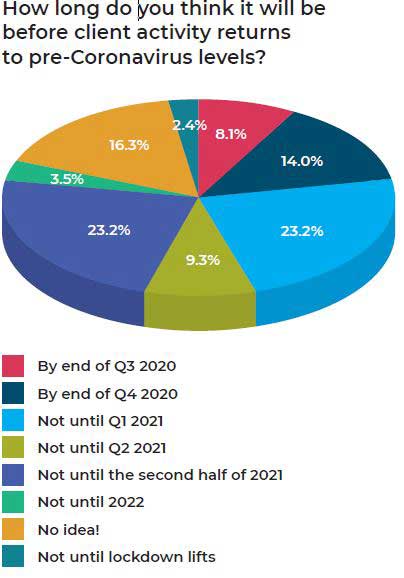 However, the joint most popular answers for recovery were the first quarter of 2021 and the second half of 2021. Some 16% were honest enough to admit they didn’t have a clue.

Although the report warned that the situation could get worse before it gets better, it also revealed that 87% of respondents believe the crisis presents them with an opportunity, with more than half saying it allows for "rationalisation of their business". 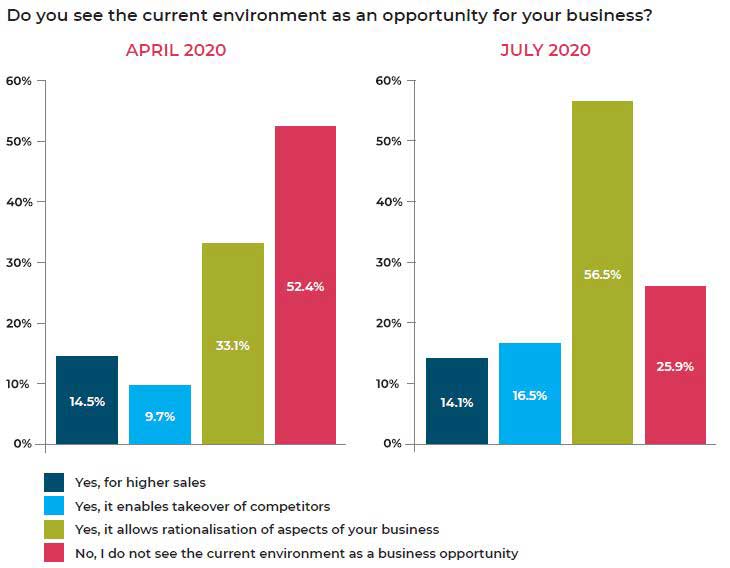 Others thought they could generate higher sales or that there would be opportunities to take over competitors. This is a different picture from April, when more than half of participants stated that they did not see the current situation as a business opportunity.

Moore Kingston Smith surveyed about 100 agencies, the majority of them independent, in mid-June. The participants represented sectors including advertising, media, design, digital and PR.

What I learned from being made redundant