We need to rethink the entire premise of the industry, which is based on selling more and more stuff, and instead build businesses through the lens of ethical consumerism.

Two images from 2019 vividly captured a time of immense cultural upheaval: the students around the world who took to the streets to demand action on the climate crisis, and fires in the Amazon rainforest. The latter rightly caused alarm over man-made damage to the environment, but it also mirrored what is happening in wider society. Many of the foundations upon which we’ve always relied, from the climate to politics, are burning – and that fire can no longer be ignored.

Agency leaders pontificate frequently about advertising’s ability to create culture, but the truth is that the industry is often playing catch up. Over the past year, it’s been young people, such as Greta Thunberg, the 17-year-old Swedish climate activist, leading cultural change. Starting with her solo protest in 2018, when she skipped school to demonstrate outside the Swedish parliament building, she has galvanised tens of thousands of students worldwide to hold regular climate strikes, culminating in September when millions of people joined the protest. Thunberg has said she was inspired by teen activists from Parkland, Florida, who organised the March For Our Lives movement for greater gun control.

Such disruptive actions are set to intensify this year. Glasgow will host the United Nations climate change summit, which is seen as a major crossroads for governments to tackle the climate emergency. Scientists have said that global carbon emissions must be halved by 2030 to avoid the worst impacts of climate change. Yet, as Thunberg and her fellow environmental activists in the rising movement Extinction Rebellion show, trust in established systems to address the world’s problems is failing. This should be a wake-up call to brands.

The same loss of faith in political systems that drove protesters to the streets applies to brands: in 2019, the Edelman Trust Barometer revealed that just one in three respondents trust most of the brands they buy and use. Within advertising and marketing, some leaders are calling on the industry to help foster a second age of consumer culture. Entering that new world would mean advertisers play a role in addressing the climate crisis – the biggest issue of our time – but that should not stop with surface-level responses such as an emotive marketing campaign or plastic installation on a beach. It would mean rethinking the entire premise of the industry, which is based on selling more and more stuff, and instead building businesses through the lens of ethical, conscious consumerism.

"Every culture has a kind of early adolescent phase before it matures. Now we have a move
toward values such as civic duty, responsibility and consideration for the future, not just the present," Dylan Williams, chief strategy officer of Droga5 London, told Campaign in 2019. "We risk losing a generation of customers, but if we can thread those values into what we make and the companies we make it for, we’ll rescue the situation. Our business is going to fall off a cliff unless we start listening to people’s demands."

As Williams, and others, recognise, conscious consumerism is no longer a niche market. Ethical spending – on products such as green energy, second-hand clothing and Fairtrade, organic and sustainable food – is on the rise in the UK, according to the non-profit co-operative Ethical Consumer. The UK spent more than £83bn on ethical goods in 2017, up 3.2% from the previous year, the organisation’s 2018 Ethical Consumer Markets Report revealed. The growth of this market has been driven by increasing environmental concern, particularly among young people.

Along with concern for the environment, brands that embrace the second age of consumerism will also dig up the skeletons in their closet and take a stance on human rights, social justice and diversity. The latter has become the marketing industry’s favourite buzzword, with scant progress to show for all its posturing. But as consumers face political, environmental and cultural upheaval, a diverse workforce is business critical. If the old systems are no longer working, then the industry needs new thinking to change them. Talent must come from different places, bringing new perspectives to create work that truly resonates with people. Diversity must move from a mere box-ticking exercise to building inclusive workplaces and developing communications that speak to the varied audiences within marketers’ homogeneous "target groups".

Brands that conduct business as usual will not survive the coming age. This should sound the alarm bells, but also presents an opportunity. In 2020, there will be a real appetite for companies that dare to do things differently and tell stories that capture the truth about the consumers they serve. Too often, marketers that want to appear forward-thinking and "woke" end up looking in the same places and listening to the same people for inspiration and guidance. If it opens those doors wider, the advertising industry will have a leg to stand on when it talks about creating culture. 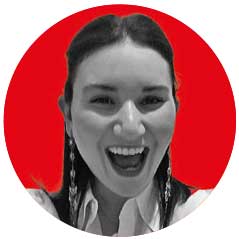 Welcome to the age of the absurd. Yes, absurd. Wildly illogical, to our brains as they stand at least. After all, it’s been predicted that we could experience more change in the next 50 years than in the past 5,000. Luckily, young people will continue to call out the bullshit that weighs us down from engrained ways of being and unconscious bias.

Their (un)common sense tells us that nothing can be assumed any more. Inconvenience can be good. Instant gratification can be bad. What’s difficult can make us happy. Putting the planet first isn’t necessarily an altruistic act, it’s a selfish need to survive. Even the notion of what it means to be human is evolving. So what do young people want? "We want a future." If we can change how we think, we can change how we act, and then deliver on that for them.

As we enter a new growth, post-human era, it’s time to rethink what we mean by "brand". What is its role, how can a brand be vital, is brand activism the answer? One thing seems certain: if brands aren’t helping society progress in the midst of the two greatest seismic shifts we’ve ever seen, climate crisis and technological disruption, then what’s the point? Let’s make friends with this elephant in the room.

What if brands could help each of us consciously re-programme our brains to think differently, so we can collectively bring about a whole new way of life? Banding together to focus our attention, and make step-change both accessible and desirable. According to the Global Shapers Survey, 78% of those aged 18-35 would be willing to change their lifestyle to protect nature and the environment, yet only 12% are taking a highly active role to improve the sustainability and state of the world. This is a gap where support is needed.

Our brains feed on emotion, the more positive and intense the better for attracting and achieving what we want – once we know what we want. In the context of all the negatives that surround us, what if brands could become beacons for positive behaviour change? Perhaps, in 2020, brands will start lighting the way to help us see the wonderfully absurd opportunities in front of us. In the year ahead, instead of brands trying to be relevant, let’s aim to be vital by focusing on where fundamental change begins: our brains.

Diversity as a concept finally landed in 2019, but in the coming year the penny will drop that it’s not enough to throw it around as a buzzword. First arrives the understanding that even within diversity, there is further diversity, and that different audiences don’t come with homogenous needs, nor are they interchangeable. Nowhere is this more apparent than when it comes to engaging with Muslim audiences.

In the UK, Muslims number approximately four million, part of a global population of 1.8 billion. The contribution of UK Muslims to the British economy is estimated in excess of £31bn every year.

Yet the vast majority of UK high-street and online retailers have yet to go beyond a token Muslim woman in a headscarf. It’s good to see glimmers of progress from the likes of Marks & Spencer, which launched an own-brand halal-ready meal line last year, and ASOS, bringing modest fashion to market.

What we ought to see in 2020 is brands fully embracing the Ramadan season, which runs across April and May, culminating with the celebration of Eid in late May. Our trends show that the Ramadan economy tops £200m. Then there’s the Hajj season in August with a second Eid celebration.

Muslim consumers are also seeking more ethical and sustainable products, driven by their Muslim values, which place significance on what the product is, how it is made and what will happen to it. Halal food and drink products are set to grow, and brands in these sectors should be thinking about products, communications and distribution. Mainstream finance is already featuring Shariah-compliant consumer finance products among its best-buy lists for their returns, and Muslim consumers will be driving a wider marketplace shift in this sector by highlighting the importance of ethics in this industry. Vegan products should reach out to Muslim audiences with the natural overlap of their ethics, products and consumer needs.

Beauty products must start to build stronger engagement with the female Muslim consumer. This will be a beautiful creative challenge because halal products overlap significantly with vegan and ethical beauty products, and brands have a chance to create propositions and communications that bring together these consumer needs.

In fact, it is the consumer desire to have brands that bring different audiences together through purpose, respect and ethics that will be the driving force for Muslim consumer engagement in the coming year. The challenge is to build on sensitive, deep insights and move away from the token, superficial engagement we’ve seen so far.

Media industry must lead by example if it wants to thrive

How data can put the emotion back into advertising

Another glass of wine?

Year ahead for technology: Trust is shot

Year ahead for creativity: Open up to exciting new voices

Year ahead for strategy: Be honest

Advertising needs to once again love what it does